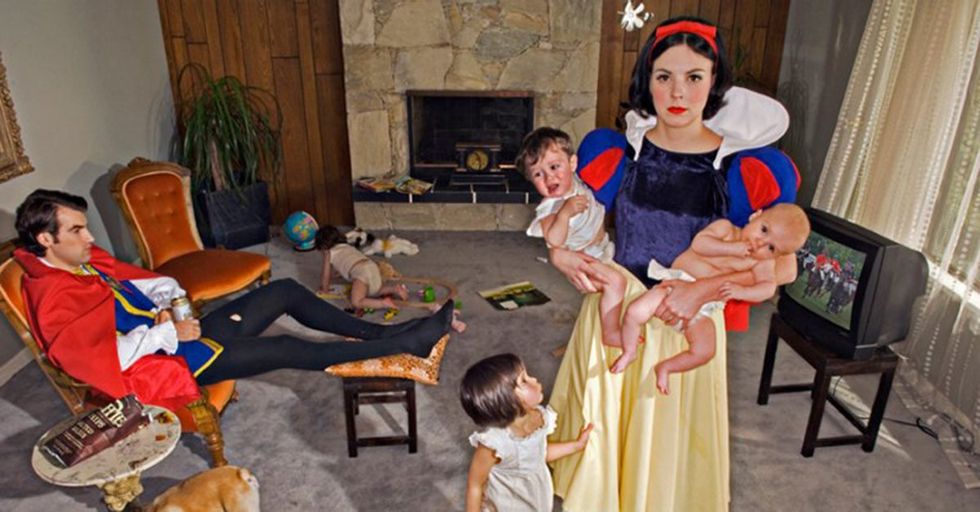 "Happily ever after," eh?

Not always. Life isn't a Disney movie, no matter how badly we'd like to be Princesses or Princes.

Life is a little more complicated than that. And Dina Goldstein, a photographer and conceptual artist, knows it.

She's been plying her trade for years with success in the art world and on Instagram.

Life seems to have worked out pretty well for her, but it's far from a fairy tale.

It takes work, and your ending hasn't been written yet.

So when she dreamed up a recent series, she wanted to show what happens when Disney characters collide with...the real world.

You know you want to see it, right?

As we well know, the fairy tale ending is a big part of every Disney story. But real life isn't always so nice and neat.

To show a dark, depressing alternative to "happily ever after," Dina Goldstein has created a photo series called Fallen Princesses. In it, we see that endings aren't always heartwarming. Sometimes they're bleak, frustrating and sad. You might not want to imagine these endings over the Disney-supplied ones, but they sure are an interesting, if not macabre, alternative. (Dina spoke with The Daily Beast about each photo, and her quotes from the interview are supplied below.)

“Here, we have Ariel, who, because she’s so unique and beautiful, has been captured and put on display in an aquarium. We tend to capture beautiful things and use them for our pleasure, and that was really the idea for the shot — the human inclination toward using beautiful creatures for our own entertainment. This project was created with no budget, so I had to do what I had to do to make a picture come together. What I did is I shot the tank separately, photographed Ariel in studio with a green screen, and then we composited the two together."

“I have a backstory for everybody. In Belle’s case, she was always the most beautiful girl in the village and her whole life people paid attention to her beauty. Then, she ends up being a pawn for her beauty, and living in a cold castle, very isolated from the rest of the world. All she has is her beauty to fall back on. Of course, we all eventually start to age and lose that, and Belle is struggling to deal with it. I’m in my 40s, and it’s a very hard thing to grasp that 10 years ago you looked one way, and now you look another way, and it’s downhill from here on out. Now, do you age gracefully and let nature take its course, or do you intervene? And Belle, of course, intervened."

“We have this area in Vancouver called Hastings East, and demographically, it’s one of the most marginal three blocks in Canada. It’s a crazy, crazy area. In my story, Cinderella is having trouble conceiving, and she’s tried in-vitro treatments and everything, and now, she’s learned that she will probably never conceive. So she’s hitting the bottle."

“She’s a soldier and has gone to defend her country, just like so many other women who are on the front lines today. When I shot it, women were in Iraq fighting, which, to me, is amazing. I grew up in Israel and, while women don’t go into combat there, I’ve always seen women with machine guns on the street because they go into the army at age 18. People will laugh, but for the helicopters and tanks, we just photographed some kids toys and superimposed them. We did what we could with the budget!"

“She’s an agoraphobic and, after her love disappeared, Pocahontas waited and waited and eventually just went into a depression and wouldn’t leave her house. She’s now working a job out of the house and her only interactions are with delivery people who come and pick up packages from her — and her cats … and her one dog." Haven't seen your favorite yet? Keep broswing!

Princess and the Pea

“I wanted to talk about the amount of garbage that we create in this world, so I used the Princess and the Pea because so many of our mattresses end up at the dump, and she was thrown away with the mattresses. You’ll find that in a lot of kingdoms — when someone loses their kingdom, they lose their title and are no longer relevant. Today, people dismiss other people so easily."

“This is the one that started it all. For me, hair is symbolic of the ultimate female trait, and the ideal hair, the perfect hair, the most feminine hair — hair is so important to women and so much weight is put on it. Here, Rapunzel has lost all her beautiful hair to cancer. I’ve had so many people going through cancer write me and tell me how this image really relays what they’re feeling, and what they’re going through."

“I like to call this one Not So Little Red Riding Hood. Her whole life, Little Red Riding Hood took care of her mother and grandmother and never did anything for herself, or took the time to be good to herself; she’s always giving to others. And she gets to a point where she just doesn’t care anymore, and then when she goes over to her grandmother’s house, she takes over McDonald’s because it’s fast, and convenient. As a mother, I know what it’s like to not have the time to prepare a huge meal all the time and for people who don’t have the money, they have to go to places like McDonald’s because good food is so much more expensive."

“She’s still sleeping and never woke up, and everyone around her ended up getting old and gray. And the prince kept waiting for her to wake up. My mother works at an old-age home near Vancouver, and a lot of these old people I’ve known forever because I’ve always gone in and visited her."

“They’ve lost their kingdom and they’ve been exiled to suburbia, so they end up in suburbia with no domestic help, and Snow White is again back to working as hard as she was in her childhood — and she hates it. The prince has to deal with the recession and losing his job, and not finding a new one, and that affects his ego, so he’s very depressed. So now, Snow White is trapped in domestic hell."