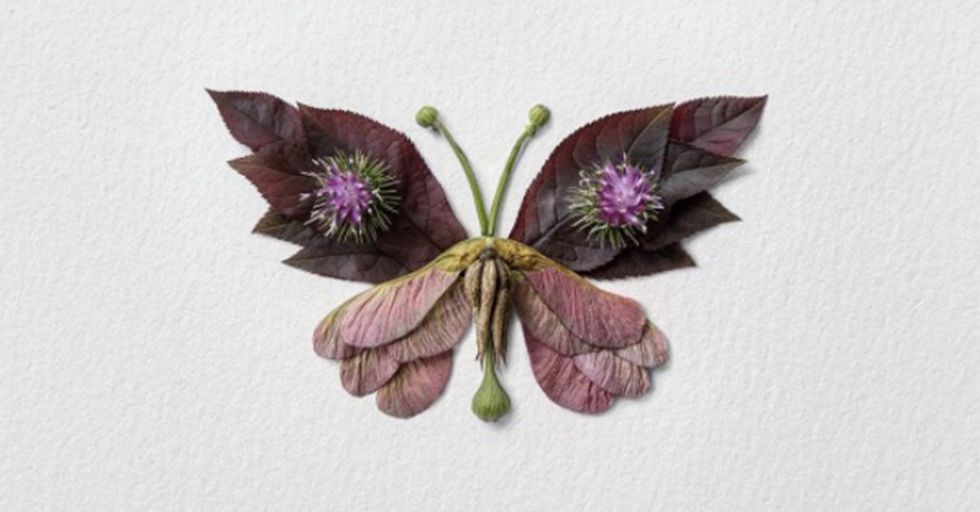 Bugs have a way of getting under people's skin. Sometimes literally, but mostly figuratively.

But one artist found a way to depict the creepiest and crawliest of creatures in the cutest way possible.

Even at their most innocent, some bugs make people's skin crawl.

Look at those spindly antennae! And those big eyes! And that fuzzy spiky hair. Ick!

But bugs are just animals, and like every other furry critter, they deserve our respect.

When you see a spider or a butterfly made out of leaves and flowers, it's not so scary anymore.

Each Inoue flower bug is based on a real insect, so they almost look like they could come to life and crawl off the page.

Not only does this piece of bug art look so impressive, it probably smells lovely too. This little guy is no stink bug.

Inoue used real plants and flowers to create each of his floral bugs. Then, he photographed them...

This marvel is made with shiso.

It's used a lot in Asian cooking and tastes like a cross between mint and cilantro. Plus, it makes for quite a beautiful moth.

It probably took a while even just to gather the perfect plants and flowers for this project, let alone put them together.

The detail is incredible. These intricate creations are beyond impressive.

With the white background, the color of this floral butterfly really pops.

This is artful, plain and simple. And the choice of medium is a wonder in its own right.

Inoue recreated a lot of butterflies.

Maybe because they are the most beautiful bugs to begin with. But Inoue's art goes beyond bugs.

Inoue's Instagram is full of art of all different kinds that's influenced by the natural world.

Take a visit to his page. You'll never want to leaf...

This playful mixed-media piece shows that Inoue has an incredible range of abilities! But there's no doubt that plants and flowers play a huge part of every piece he makes.

Creepy-crawlies become a lot less creepy when they're recreated in flower form.

You might still freak out if it brushed your leg, though. Understandably.

While you might not appreciate when actual bugs are crawling all over you, there's something magical about the marriage of bugs and flowers that Inoue captures beautifully.