An Artist Switched the Sexes in a Series of Vintage Ads, and We Can't Look Away | 22 Words 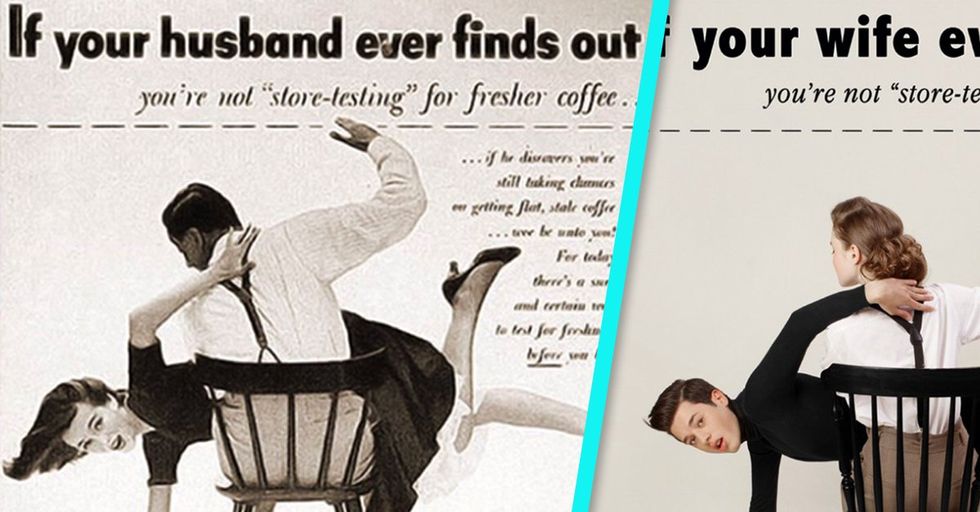 An Artist Switched the Sexes in a Series of Vintage Ads, and We Can't Look Away

Ah, the good old days. A man could really be a man then. He could hold down a solid job and provide for his family (with only the minimum education!) while his womenfolk did what they were truly meant to do – keep the house clean and pop as many babies as they could. It was heaven, pure heaven...

You know the ones. They look like something out of Mad Men and invariably feature a harried looking woman doing harried household things while a very smug or happy looking white guy tuts at her.
Vintage ads show us an idealized version of life in the way back when, but they also show us precisely what the problems were – namely, sexism.

Most, if not all of the popular ads depict very rigid views of gender and sexuality. It's always a heterosexual nuclear family – husband and wife and chubby blond kids.
Heaven forbid any mention of homosexuality – that was considered a mental illness back then and punished accordingly. And the rare people of color depicted in ads were always racist stereotypes. American meant white, after all – at least in those days.

@absurdistwords Vintage soap ads were the worst. Some tried to be cute. Others seemed outright hostile. https://t.co/e4YoffmQjI
— Mary (@Mary)1515267926.0

Now, Eli Rezkallah, a Lebanese photographer, is examining vintage ads with a very modern flair. He's switching up the sexes to show just how sexist those ads really were.

Rezkallah explains via Twitter that the series, "In a parallel universe" is "recreated from real ads in the mad men era, that question modern day sexism: showing it through a humorous light to spark a conversation through role play."

“In a parallel universe” is a series of fictional images, recreated from real ads in the mad men era, that question… https://t.co/tEmnyc7jzc
— Eli Rezkallah (@Eli Rezkallah)1515612146.0

The series of ads plays with the idea of a "woman's place," that is, the perception that women belong at home and should put the needs of their family above themselves.

Rezkallah has tagged the ads as part of the Times Up movement, which seeks to to address gender inequality in the workplace via a defense fund and advocacy, among other methods.

Rezkallah explained his motivation for creating the ads on his website.

Last Thanksgiving, I overheard my uncles talk about how women are better off cooking, taking care of the kitchen, and fulfilling “their womanly duties." Although I know that not all men like my uncles think that way I was surprised to learn that some still do, so I went on to imagine a parallel universe, where roles are inverted and men are given a taste of their own sexist poison.

Rezkallah's work has resonated with Twitter users, who have liked the images over 12k times. After all, they're a reminder of just how far we've come, and how much further we have left to go.