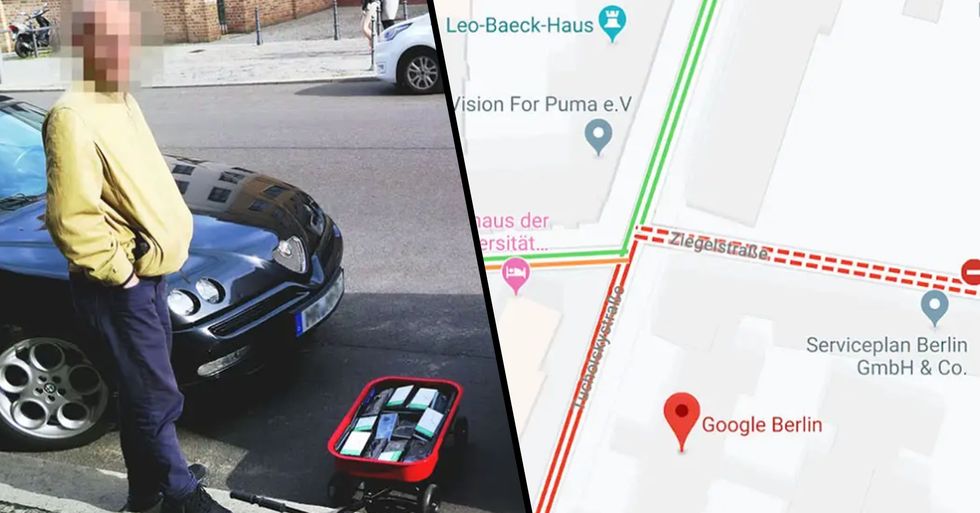 Google Maps' Street View, has offered users many benefits, from locating our nearest coffee shop to offering an unlikely comfort to grieving users all over the world.

One artist has used it to portray the most powerful message, using Google Maps as a way of showing us how dependent we are on machines.

You can see the artist's video at the end.

Some people have been using google maps to find pictures of their loved ones.

Yes, you read that correctly - It turns out that the Satellite Navigation tool has proven as an effective method of coping with grief for some people.

But what exactly is Google Maps?

Google Maps is a satellite mapping system which, at the tap of a button, can locate users and instantly map out routes and directions all over the world.

With Google Maps, you will never be lost again.

The digital mapping program was launched in the U.S. on February 8, 2005, by Danish brothers, Lars and Jens Eilstrup Rasmussen and, ever since, has developed and progressed to levels we never thought was possible.

It is a truly remarkable invention.

By superimposing satellite images, aerial photography, and GIS data onto a 3D globe, users are able to see cities, landscapes, and even buildings and houses from various different angles.

And, by using Google Maps' Street View toggle, you can immediately see it as though you were standing there in real life.

Ever wondered what a Las Vegas highway looks like?

Well, wonder no further, because Google Maps can show you!

But this Street View feature was no easy feat...

Originally launched for select U.S. cities in 2006, and rolled out to Europe, Japan, and Australia in 2008, the service was made possible by building up photographs of every street in the city using a specially equipped camera mounted on a car.

And the Street View cameras have traveled the world, capturing photographs of nearly every inch of our Earth.

The Google Maps cameras have captured a little more than just buildings and landscapes.

Obviously, the cameras capture photographs of people out in the street, living their daily lives...

And people have recently been taking to the navigation site to see captured moments of their loved ones who have sadly passed away.

Twitter user, Yajaira, shared a screen recording of her Google Earth search alongside the caption: "My grandpa passed away a few years ago. We didn’t get to say goodbye to him. Yesterday we found out google maps finally drove through his farm and as we were curious going through it, where the road ends, there is my grandpa, just sitting there."

And, sure enough, there he is.

Sitting, in the shade of his porch, is her Grandpa.

Other Twitter users began searching for their own loved ones who had sadly passed away... And the results were incredible.

Google Maps has unknowingly immortalized these people on the internet...

And their grieving relatives are finding solace and comfort in the candid photographs.

People had no idea that the mapping site had captured such important memories...

And were understandably very emotional upon their discoveries.

Another user was also able to find her deceased Grandpa...

"My grandpa too! Marked 8 years on December 2019 since he’s been gone," the excitable social media user wrote.

One woman was able to find a shot of both her grandparents, who had both sadly passed away.

A photograph can speak a thousand words.

Others found their parents...

This woman found her dad, who had sadly passed away 3 years earlier, waving jollily at the camera as he washed his car in the front yard.

Another also found his Dad...

Who was also working away on his car in the front yard, "doing what he did best aside from being a father."

And they thanked the Yajaira for enlightening them to the marks their relatives had unknowingly left upon the internet.

And others found different family members from the past...

Like their deceased pets. Okay, this one would get me crying...

Who'd have thought an online navigation system could bring people so much joy?

When it comes to dealing with death, there are many different ways in which you can bring a smile to a person's face... And one man in Ireland had the perfect solution. Keep scrolling to see why one artist is using Google Maps.

One artist is using google maps to create something powerful.

Simon Weckert an artist based in Berlin "hacked" Google Maps using only a wagon and 99 smartphones.

All the streets came up on Google Maps as red 'heavy traffic' zones.

It caused Maps to reroute drivers...

So that people would avoid the busy streets.

Weckert said in an email to Business Insider...

The app determines traffic by smartphones that use location services.

As well as using, "contributions from the Google Maps community."

This is what one representative from Google said:

"We've launched the ability to distinguish between cars and motorcycles in several countries including India, Indonesia, and Egypt, though we haven't quite cracked traveling by wagon," "We appreciate seeing creative uses of Google Maps like this as it helps us make maps work better over time."

Weckert said in an email to business insider, "there is no such thing as neutral data. Data is always collected for a specific purpose, by a combination of people, technology, money, commerce, and government."

His results were published for Google Maps 15th birthday.

He wanted to draw attention to how much control tech companies and platforms have over our lives, and how much blind trust we give them.

"Maps have the potential as an instrument of power for some intentions. They substitute political and military power. We are highly focused on the data of apps like Google Maps, and tend to see them as objective... thus data are viewed as the world itself, forgetting that the numbers are only representing a model of the world."