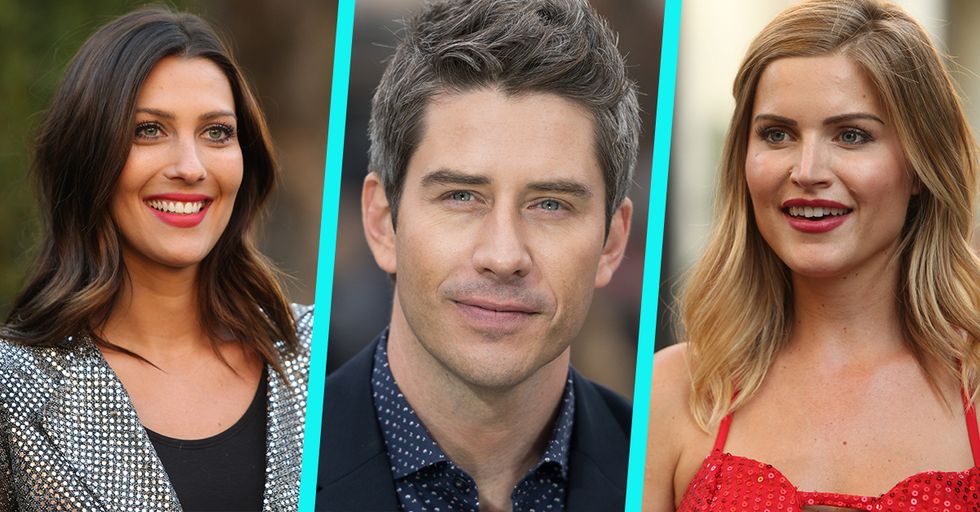 Getting that final rose on The Bachelor is every contestant's dream, or so they say.  Actually, it might be more about lasting as many weeks as possible - by any means possible - in order to score an invitation to Bachelor In Paradise, or at least jack up those Instagram followers to decent Flat Tummy Tea sales numbers. At this point in the season, cuts are going to start happening fast and furiously. After all, Arie's pillow lips can only handle so much action.

Here's a peek at the 15 women who have made it to week four. Who will be crying in the driveway Monday night?

The many-times-kissed front runner (in our opinion), Becca is the "girl next door" that Arie can grow old with. In matching cardigans. Even if she does go home soon, at least Becca scored some sweet swag on her first date.

The pixie firecracker from Fresno who leads with her sizzle, Bekah is pulling some sort of Jedi mind trick on Arie every time she has him within her grasp. He is virtually helpless while under her spell. Watch out: The Force is strong with this one.

Krystal is the woman everyone loves to hate, and she's playing that role all the way to Arie's top two. Although we don't think Arie will ultimately pick her in the end, producers love a good villain. And Krystal's breathy passive-aggressive jabs, matched with her behind the scenes maneuvering, are exactly what the ABC network ordered.

Single mom Chelsea seems Arie's exact type in every possible way. But so far, she hasn't scored the romantic alone time with him that she needs to seal the deal. Chances are, this moment will be coming VERY soon. If not, something tells us Chelsea is capable of going full-on Fatal Attraction on Arie's ass! (Which we also fully support.)

Brittany is one to watch. There's a fire burning in the heart of this Tech Recruiter, and she's making the right moves to keep her in the game - so far. Sparks aren't exactly flying between Arie and Brittany yet, but there's a small flame burning. Stay woke!

Caroline likes Arie. Arie likes Caroline. They are both attractive, but as boring as watching Arie flip through his family photo albums on a first date. So, maybe they're a perfect match? Sigh.

Ashley hasn't broken any major ground on the show yet, but there's something Arie likes about her that puts a tiny sparkle in his eye. Maybe it's because she's a real estate agent and can talk travertine floors, upgraded appliances, and marble countertops all day, every day?

Our girl Maquel needs more camera time, STAT. After dressing up as a lunch lady at last week's GLOW wresting group date - sporting a fake mole, no less! - we've been won over by this gal. A woman who is gorgeous, smart, funny, and doesn't take herself too seriously? Yes, please.

Jacqueline seems like the type who's been dreaming of her wedding, and watching Titanic on a bi-weekly loop since she was in the third grade. Arie likes her enough to keep her around, but she doesn't seem long for this reality TV world.

What can we say about Jenna so far? Um, nothing. There is nothing to say. Moving on...

Kendall is the silent threat, slinking around in the background, but also connecting with Arie during their alone time (which has consisted of maybe 10 whole minutes thus far). Also - Arie seems to dig this chick's taxidermy weirdness, so that's good news for her. Maybe?

Four Laurens enter, ONE LAUREN STAY! The last Lauren standing has a lot to prove to her namesake-sisters. Like, what's her angle on this show? Because we haven't figured it out yet.

One simply must stare at the screen in awe every time the camera pans to the almost sculpted-from-clay-beautiful Marikh. She leads with elegance, and seems possibly a bit too deep for our boy, Arie. He just hasn't realized it yet. Let's hope she does soon.

Sienne won Arie's admiration for her demolition derby skills, but hasn't really made a connection with the Bachelor in a one on one setting yet. Maybe they can race each other soon? Better yet, how about this Yale grad challenge Arie to a battle of wits, for which he may be shamefully unarmed?

The only thing memorable about Tia is her emotional breakdown at the GLOW wrestling date which, yeah we agree, sucked the big one. But this snowflake doesn't seem to be cut out for the tough times. And by tough times, we mean fake group dates where you are forced to act like you're having fun. If you love all things Bachelor, check out our coverage of last week's episode here!