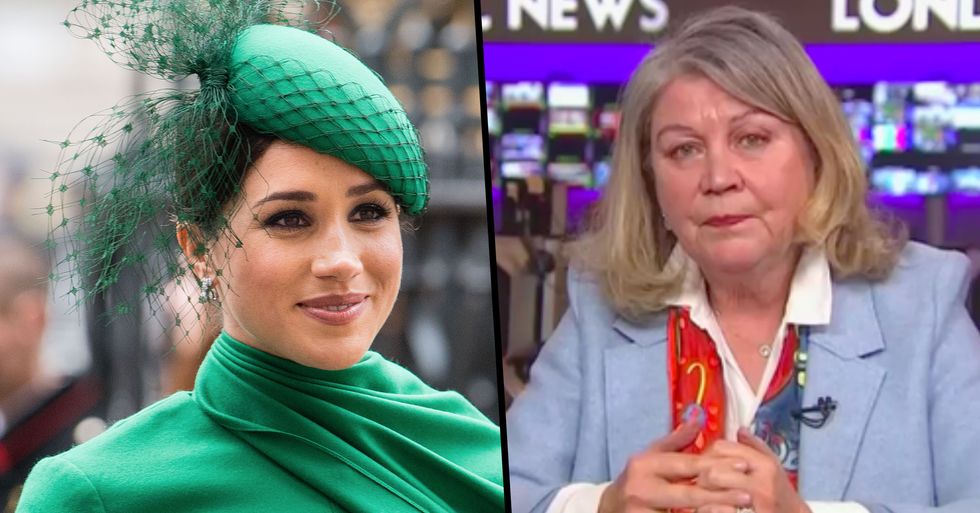 In the wake of International Women's Day this weekend, Meghan Markle made a surprise visit to a high school in London, where she mingled with students, sat in on classes, and gave a speech on gender equality.

And even while she's doing so many good things, it seems as though it has been overshadowed by the critics. Recently an MSNBC guest decided to refer to her as "trailer trash."

And you'll never believe what else she said...

Elephants Without Borders are an organization that help track animals and protect them from poachers - so it certainly seems like Meghan is doing the right thing. She truly is an inspiring woman.

However, some people disagree...

A guest on decided to share her disgustingly honest views about the former royal on MSNBC Live. British reporter, Victoria Mather, first called out Meghan for being "disrespectful" to the royal family and the way it is run.

This is what she said:

"I think what has really, really upset the British public is that Meghan Markle, who many people consider as only, you know, five clicks up from trailer trash, has actually tried to disrespect the queen. And the queen is the most respected person, most respected woman, in the world."

Speaking horribly on behalf of all the British people was a mistake, Mather.

On the show, she was referred to as a "royals watcher", however, she currently works for the news platform Air Mail, as a writer.

And what makes it worse was that she didn't even try to correct them.

Even on her social media platforms, she identifies herself as a travel editor for Vanity Fair, which was her former job title. She has not been employed there since 2008. Yikes.

She once wrote a piece about the royals for Air Mail.

And in that article, she also referred to Meghan as "trailer trash" while also calling her the "Duchess of Excess."

Her words described Meghan in a disgusting manner:

"Catherine [Kate Middleton] comes from a stable, close-knit family. Meghan comes from a sadly dysfunctional family, leading to her being unpleasantly trolled as trailer trash."

And on the show, she backed up that argument.

She claimed the main reason why Meghan felt threatened and wanted to leave the family was because she knew she would always be "second-best" to Kate.

"Don't forget Prince Harry is — you know, has always been the spare to the heir. So I don't think Meghan Markle wanted to spend the rest of her life looking at Kate Middleton's back as she sat in the second row to the future queen. I don't think she wanted — she didn't want to be second best. And I don't think she got that that was what — that is what the fusty-dusty protocol of the royal family consists of. It is a matter of precedence."

She also decided to fuel another tabloid rumor:

"I do hear that she gave Kate a knife for Christmas," Mather laughed. "Which is quite something, isn't it?"

Reiser also said that the news network does not confirm anything to do with the knife-gifting...

And since the "trailer trash" comment went viral, people have spoken out.

Some people have claimed that Mather isn't even trying to hide her blatant racism and how she handles herself.

Others have said this:

@NolaMarianna These women must be desperate. What's a travel editor doing talking about #MeghanMarkle
— Stick_an_Stones (@Stick_an_Stones)1583593758.0

They really must have been desperate. Out of all the people in the world they could have had on the show, they picked her?

People are now calling for the writer to be fired from her job.

To be honest, Meghan and Harry will continue thriving regardless of opinions such as this one, though, in my humble opinion, she deserves to lose her job. How tactless.