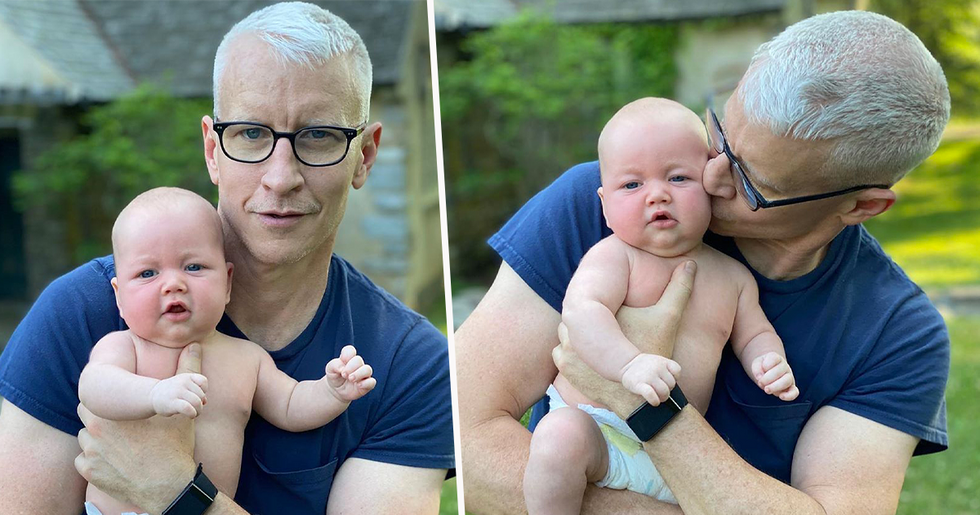 And it seems life is looking pretty rosy for the new dad...

There's no doubt being a dad is rewarding.

The love one feels for their offspring is second to none.

Parents and children have an undeniably special bond.

And it's adorable to watch it grow.

But that isn't to say it's easy.

Any new dad will tell you...

Life isn't without its challenges.

But not for Anderson Cooper.

Based on a recent interview with WSJ Magazine, it seems he's basically living the new-dad dream.

Cooper went on to study at the lucrative Yale University.

And, after earning a B.A. in political science, he got a job as a fact-checker for Channel One News - a news program broadcast in many American middle and high schools.

During his time there, he decided to go off on his own venture.

Cooper forged a press pass and traveled to Southeast Asia, where he self-produced coverage of the political turmoil in Myanmar, as per Britannica.

After seeing his work, Channel One decided to air his pieces.

And later promoted Cooper as its chief international correspondent.

Cooper has had an extremely lucrative career in journalism.

And he's a face were all familiar with seeing on our screens.

The star joined ABC as a reporter eventually went on to coanchoring World News Now, the network’s overnight news program.

However, in 2000, Cooper's career took a slight detour.

The star made the decision to leave news reporting to host ABC’s prime-time reality television show The Mole.

It wasn't long until he returned to the newsroom once more.

And, just 2 years later he became the anchor of his own program - Anderson Cooper 360°.

Of course, he didn't stop there...

At the same time as anchoring his own show, he was still regularly contributing to CNN’s NewsNight.

But, in 2005, Cooper well and truly caught the world's attention.

The journalism veteran received national attention for his reporting on the devastation to the U.S. Gulf Coast caused by Hurricane Katrina.

While still working for CNN, Cooper went off on other TV-related ventures.

In 2007 he became a regular contributor to the CBS news program 60 Minutes, and 4 years later, he began hosting Anderson ( which later became Anderson Live). He also penned his memoir Dispatches from the Edge.

In 2012, Anderson publically came out as gay.

And recently, the star opened up about what it was like to come out to his family and friends. “I came out in high school to my friends. I was in love with this guy and I was so desperate, I just asked all my friends how I could get him. And I sort of always felt like I was out, I had boyfriends, I’d go dancing, I’d go to bars and stuff. But reporters didn’t really talk about their personal lives," he explained in a 2019 interview with EW.

"And then, with Twitter and the internet, suddenly you could access something about anybody. And the expectation became, ‘You’re a public person, you should be public.’ And in the world of journalism, that was kind of still… I don’t know. It was a difficult thing to navigate. "I was traveling in the Middle East a lot. I spent most of my early years in war zones. And I’d gone to a lot of countries where it’s illegal and where, at the time, I had no security. I was by myself in Somalia and all these places and it was just easier not to say something. But I reached a point where, by not saying something, I realized I was saying something. Oftentimes you hear, ‘Well why should I have to come out? I’m open in my private life. I’m not hiding anything. I never pretended.’ But it does make a difference."

He went on to reveal that he "forgot" to tell his mom.

"So, I thought about it a long time. I spent a lot of time writing out an explanation, a letter. And I decided not to try to make a big deal about it at the time. I just published it on a website of a friend of mine, Andrew Sullivan, and that was it. It was actually funny because I was in Africa shooting something when it was published and I didn’t realize I was in a place that had absolutely no cell phone service for three days. "But as soon as I got to Johannesburg, my phone lit up. And I’d realized I’d forgotten to tell my mom I was making this announcement. I’d come out to her a long time ago, but she was like, ‘Oh, you could’ve given me a heads up!'"

And in April, Cooper enetered a brand new chapter in his life...

Announcing the birth of his son!

"I want to share with you some joyful news. On Monday, I became a father," he wrote. "He was 7.2 lbs at birth, and he is sweet, and soft, and healthy and I am beyond happy."

"As a gay kid, I never thought it would be possible to have a child."

"And I’m grateful for all those who have paved the way, and for the doctors and nurses and everyone involved in my son's birth."

He then revealed his son's name.

And the meaning behind it is truly heartwarming.

"This is Wyatt Cooper. He is three days old. He is named after my father, who died when I was ten. I hope I can be as good a dad as he was. My son's middle name is Morgan. It's a family name on my mom's side. "I know my mom and dad liked the name morgan because I recently found a list they made 52 years ago when they were trying to think of names for me. Wyatt Morgan Cooper. My son," he added.

And he's now revealed all about his new role as a father.

He's a big fan of the to-do list. "I have an ongoing list. I was recently advised to order it and that has been a huge help to me. Someone suggested — it seems like such an obvious thing — to order it as 'important/urgent,' 'important/not urgent' and then just 'to do.' "

Routine is important when staying on top of work.

"As soon as I've seen my son wake up and I feed him, I usually wait until he goes back to sleep. He wakes up around 8:15 and by 10 he's ready for another little nap. As soon as he goes down, I run and get an iced coffee and I cannot tell you the degree to which I look forward to that."

"I never really drank coffee until my son. It's amazing."

"I now understand coffee, although I do think it's basically just a narcotic. And we've all just accepted that, 'Oh yeah, coffee's not a drug, it's just a drink.' No, it's not, it's a drug. But everyone seems to think it's okay, it's legal."

"I've often in my life felt like I was waiting for my actual life to begin — it's obviously ridiculous because I'm 53 years old — but … I've been very focused on getting to some place, getting a story."

"Because I'm focused on [Wyatt], it gives an order to everything."

"My whole motivation in the morning is to be there when my son wakes up because it is the greatest moment of my day."

"He sleeps in this sleep sack, which I didn't know was a thing, and he makes all these great sounds and he stretches and when he finally wakes up and sees you and smiles ... it's incredible."

And amazingly, Wyatt is sleeping through already!

"I have an amazing nurse," Cooper explains.

"I'm not sure what she's done but I'm told there's no Ambien or whiskey involved."

Can we get her number? Want more celebrity baby news? Scroll on for the latest with Amy Schumer...