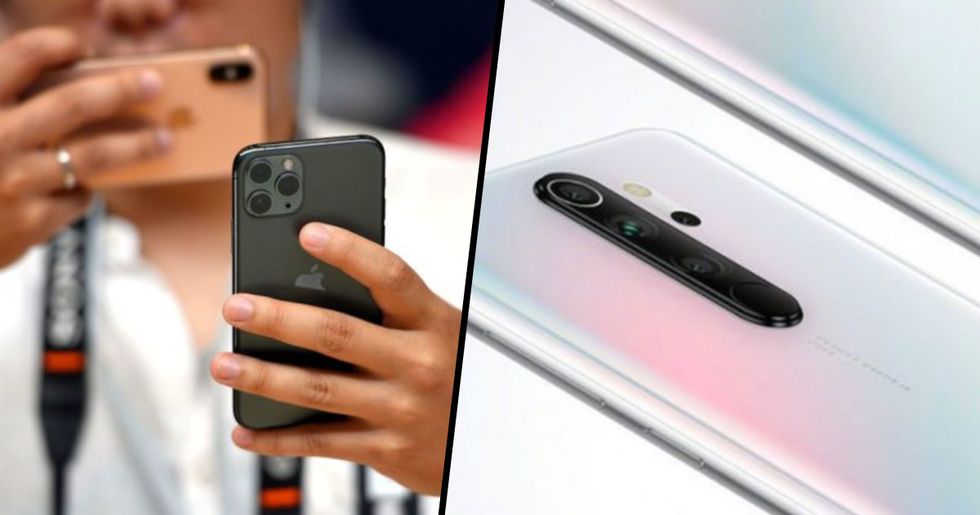 Unless you've been living under a rock this past week, you'll have heard that Apple has released its newest iPhone, the iPhone 11.

Like the release of any new Apple product, excitement has been rife, and people have been eager to get their hands on the fresh device, which will be available to preorder from September 13th.

In the meantime, however, Apple have wasted no time boasting about the iPhone 11's new and impressive features, such as a triple rear camera, night-vision, and slow-motion selfies, which they have branded as "slofies." Yeah, that one's a no from me.

However, if these features seem a little bit familiar, it's because a number of different Android phones already have them.

Sorry to burst the bubble of all hardcore Apple fans out there, but Android has been 2 steps ahead of the game for years. Keep scrolling to read about the features, and which brands have actually been paving the path for smartphone technology.

The iPhone 11 has officially landed.

And Apple fans far and wide are frantically scrambling to get their hands on the new and sophisticated device.

After months of speculation, the newest addition to the Apple family was finally unveiled this week.

At the infamous Apple keynote event, the company unveiled several new products, such as the latest Apple Watch, iPad and Mac Book Pro. However, the one that everyone was talking about was the newest generation of iPhone.

The release of a new iPhone is always a highly-speculated event.

Because Apple certainly know how to hype up a crowd, don't they? The newest device has been labeled the "iPhone 11," and Apple have made the bold claim that it will be "better than any other phone."

The iPhone 11, the iPhone 11 Pro, and the iPhone 11 Pro Max. The 3 new iPhones were dramatically unveiled on Tuesday, and feature faster chips and better cameras than their predecessors. They also have better water resistance, sturdier glass, and better battery life, among other minor improvements.

The iPhone 11 sports a variety of new colors.

The keynote proudly displayed the phone’s vibrant array of finishes which include: green, purple, yellow, white, black and (Product) RED. While the first 5 colors were stunning in themselves, the crowd absolutely loved the 2 new “Easter" shades of green and purple, which are firsts for any Apple product.

The air was thick with excitement for the many new features.

And the new "Slofie" was one of the most talked-about designs. The front-facing camera has received upgrades that enable users to take "slofies" - Selfies in slow-motion, for those who didn't catch on in the first place. Though I'm unsure of how much I'd like to see my face in slow-motion...

And the most noticeable update of the new models?

The overwhelming abundance of cameras. While the standard iPhone 11 model features 2 cameras, the Pro features 3. The new lens is positioned vertically below the standard wide, but captures subjects within a highly-impressive 13mm equivalent focal length. And the 3 lenses for Wide, Ultra Wide and Telephoto are being called "a photographer's dream come true."

However, some people with a certain phobia are being triggered by the new camera lenses.

People with trypophobia are apparently getting triggered because the cameras are designed in a cluster of circles.

Trypophobia is "an intense emotional reaction to clustered patterns of holes or bumps" - and people have been quick to point out that the iPhone 11 could do with a trigger warning.

The camera placement is making plenty of people feel uneasy...

Despite these cameras being the highest quality of any iPhone, many people have been distracted by the creepy placement of the lenses.

Swiftly moving on from the trypophobia stuff...

The overall launch of the iPhone 11 has been a major success, with crowds of tech fans clamoring to test out the new models.

Yet, despite all of the excitement and publicity over the launch...

Many passionate tech-fans have been quick to point out that the phone's remarkable features have actually been done before, and by no other than Apple's number 1 rival - Android.

Android has seemingly been 2 steps ahead of Apple this entire time.

And, despite Apple's popularity...

Android has long been argued as a better and more technologically advanced operating system by computer developers and tech experts far and wide.

Android have always been ahead of the game...

And, judging by the iPhone 11's "new" features, they have seemingly been at the top of the technological leader board for a while now.

Many of the iPhone 11's "new" features were actually pioneered by Android.

Let's start with the triple rear camera combo, which has pretty much been the standard on flagship Android smartphones for over a year now.

We've seen it all before.

Huawei's P20 Pro had a triple rear camera in April last year and LG's V40 ThinQ had it in October 2018. Notably, LG's flagship has a very similar setup to the iPhone 11 Pro and Pro Max, consisting of wide, ultra-wide and zoom sensors.

There has even been a quad rear camera...

Not by Apple, obviously. Xiaomi's recently announced Redmi Note 8 Pro has 4 cameras with a sixty-four-megapixel main sensor on the back and a twenty-megapixel sensor on the front. Apple's "Pro" iPhones only go up to twelve-megapixels, both front and back.

As for the iPhone 11's camera night mode?

It's already been done. The Apple team boasted about the new models night mode feature, which will enable users to take photos in the dark without using flash by having an AI automatically brighten your snaps for you.

However, various Android-run brands already beat Apple to it.

Google's Pixel has been doing night photography better than the iPhone for a while, and, recently, both Samsung and Huawei caught up to the night-vision camera, well before Apple did.

There are other minor things that Apple has missed out on...

Such as the lack of reverse wireless charging on the new iPhones, which Apple reportedly gave up because it wasn't up to company standards. Huawei and Samsung phones have had the feature for a while. Oh, and Android-run phones tend to be a hell of a lot cheaper than iPhones. However, there's one thing that Apple has beaten Android to, and that's the pet-portrait mode. Yep, they actually have a camera setting dedicated to taking high-quality photos of your pets. Keep scrolling to read more about it!