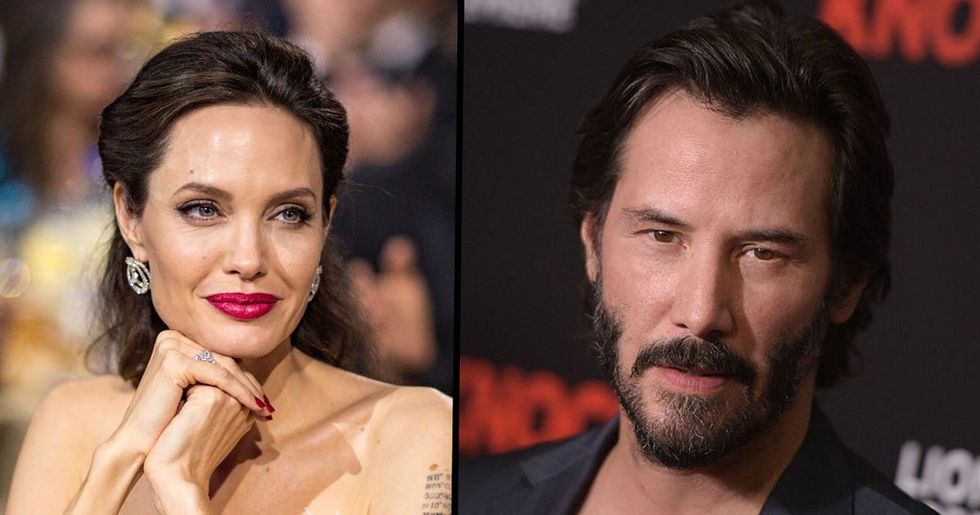 The latest rumor to land slap bang in the middle of the Keanu Reeves gossip mill is that the actor may be dating Angelina Jolie.

Now I'm all for a Hollywood romance, but after sifting through all of the speculative media reports, evidence that these two achingly beautiful stars are getting it on is... well, slim, but it is possible! We don't need photographic evidence of Jolie and Reeves spoon feeding each other frozen yogurt and shopping for artisan rugs to dream.

I would never have put this pair together, but now that it's been put out there, I can see that they'd make quite a brilliant match.

So if either Keanu or Angelina is reading this: read on as I give you six reasons that you two would be a great match.

1. The pair live conveniently close to one another.

Well, I mean, technically, Keanu Reeves' mom lives close to Angelina Jolie. But anyone that follows Keanu Reeves' coming and goings will know that the actor is very fond of his mom and visits her frequently.

After splitting with Brad Pitt, Ange moved to the Loz Feliz neighborhood in LA.

Someone else who lives in the Loz Feliz neighborhood in LA is Reeves' mom, Patricia Taylor. According to the rumors, a "celeb-insider" has claimed: "Keanu's really close to his mom and visits her all the time. That's how he came to meet Ange. They found they have a lot in common, and the attraction was definitely there."

2. Jolie is a Gemini and Reeves is a Virgo.

"What does that mean?" I hear you hungrily ask. Well, dear reader... According to some website that I just looked up, Gemini and Virgo are quite the match. Quora.com explains: "Gemini and Virgo both have the same ruler (Mercury) and that’s a big deal — because they’re both DEXTEROUS, COMMUNICATIVE, INTELLIGENT, QUICK-THINKING, FLEXIBLE and SMART."

3. Keanu Reeves and Angelina Jolie both came from broken homes.

Keanu Reeves' mom and dad separated when he was three years old. His dad abandoned the family and served time in prison for selling heroin. The last time that Reeves saw his father was when he six years old. Jolie's mom and dad separated when she was still an infant and she was also raised by her mother. Strikingly similar to Keanu, all contact with Jolie's father was cut off when she was six, as her mother, Marcheline Bertrand, and her partner, Bill Dally, moved Jolie and brother to New York. The brood did not return to their birthplace of LA for five years. So both actors had absent fathers, eh? That's something that they could connect over with a glass of merlot.

4. Both Jolie and Reeves had a tough time in high-school.

Keanu attended four high schools and was expelled from at least one of them. On the subject of his troublesome high school years, Keanu admitted: "I was just a little too rambunctious and shot my mouth off once too often. I was not generally the most well-oiled machine in the school. "

Do you know who else was a bit of a rebel in high-school?

You guessed it! Angelina Jolie. After struggling to fit in with the affluent kids at Beverley Hills High School, Jolie moved to Moreno High School, discussing the period, Jolie said: "[Moreno] It’s where the bad kids go. I chose it. I was the punk outsider who nobody messed with. I was fearless."

So the pair were both messed up kids searching for something more...

By the ages of seventeen, both Keanu and Angie were acting full-time. They had found their paths and stuck to it. Coincidence, eh?

5. Angelina Jolie and Keanu Reeves both have an interest in spirituality, neither subscribing to organized religion.

Keanu Reeves is often mistakenly labeled as an "atheist" or a "Buddhist." Clarifying his beliefs, he said: "Do I believe in God, faith, inner faith, the self, passion, and things? Yes, of course! I'm very spiritual. Supremely spiritual. Bountifully spiritual. Supremely bountiful." But as far as subscribing to a specific religious doctrine, Keanu is not interested.

Keanu Reeves believes in an afterlife, of sorts.

Considering the number of people that Keanu has lost, racking up much more than most, it's little wonder that the Matrix actor believes in something on the other side. Talking about the afterlife with Stephen Colbert, Reeves said: "I know that the ones who love us will miss us."

Jolie also considers herself a spiritual person that does not conform to organized religion. Speaking about her religious views, Jolie stated: "We're not alone in the world. I don’t know if there’s a name for that - religion or faith - just that there’s something greater than all of us, and it’s uniting and beautiful."

Reeves and Jolie are both sexually liberated.

Jolie has openly discussed her bisexuality, having had a serious relationship with the actress and model, Jenny Shimizu. According to Shimizu, the pair had an on-and-off relationship for a number of years, even while Jolie was married and in other relationships. According to Jolie, "I would probably have married Jenny if I hadn't married my husband. I fell in love with her the first second I saw her."

Jolie has no conflicting feelings about labeling herself as bisexual.

Despite being notoriously private, Keanu is also rumored to swing both ways.

When asked by Interview Magazine in the 1990s if he was gay, Keanu responded, "No, but ya never know." Since then it seems that Keanu has been more than open to the idea. When rumors circulated that Reeves had married fellow actor David Geffen, Reeves publically said: "For a while people were saying that David Geffen and I had gotten married. That just blew me away. Not because they thought I was gay, but that they thought I could land a guy that hot."

It's important to share the same fundamental views in any relationship.

We've already established that both Jolie and Reeves are spiritual, but not religious and are open to a less contrived view of sexuality. What else do they need?

6. Both Angelina and Keanu are passionate about charity.

Angelina Jolie is driven by her humanitarian work. In February 2001, Jolie went on her first humanitarian mission to Tanzania. Over the next decade, the actress went on over forty missions with UNHCR, meeting with refugees and displaced people from over thirty countries.

Jolie's humanitarian work has been recognized all over the world.

Her efforts have raised awareness and exposed crisis' that otherwise would have remained out of the national press. Speaking about her goals, Jolie stated that she aimed to visit what she termed "forgotten emergencies," crises that media attention had shifted away from.

Any celebrity would struggle to match the number of awards that Jolie has garnered for her charity work.

Shall we list them (she has got loads)? Jolie has been awarded the inaugural Humanitarian Award from the Church World Service's Immigration and Refugee Program, a Citizen of the World Award by the United Nations Correspondents Association, the Global Humanitarian Award by the UNA-USA , the Freedom Award from the International Rescue Committee, the Jean Hersholt Humanitarian Award, and she was appointed an Honorary Dame Commander of the Order of St Michael and St George (DCMG) for her services to the UK's foreign policy and campaigning to end sexual violence in war zones. Phew! Wonder where she keeps all the trophies... She probably melts them down and gives the gold to charity, knowing Jolie.

Can Keanu Reeves get anywhere close to matching the global humanitarian efforts of Jolie?

If he wants to get in her good books, he'll have to have made quite the impact on the world of charitable goodwill, no?

Fortunately for anyone rooting for this match, Keanu is very charitable.

Keanu Reeves set up a secret charitable foundation, pumping millions into the organization for over a decade. Speaking to Ladies Home Journal in 2009, The John Wick actor admitted: "I have a private foundation that’s been running for five or six years, and it helps aid a couple of children’s hospitals and cancer research. I don’t like to attach my name to it, I just let the foundation do what it does." Keanu Reeves has given away much of his money and has openly discussed his disinterest in hoarding his wealth. According to Hello! magazine, Reeves once said: "Money doesn’t mean anything to me. I give lots away and live simply. We all know that good health is much more important."

Surely Jolie and Reeves would make the ultimate power couple!

I think that, if Angelina Jolie and Keanu Reeves did get together, they would probably work out how to solve world hunger - or at least be real cute, and they'd probably be quite good for each other, too. They are just two people who deserve nice, caring partners and I truly think that they could work. Even if the rumors are just rumors, this celeb-matching certainly gets my vote. Angelina would have to be crazy not to date Keanu, and if you're still unsure, here's some evidence that Keanu Reeves is the nicest man in Hollywood.