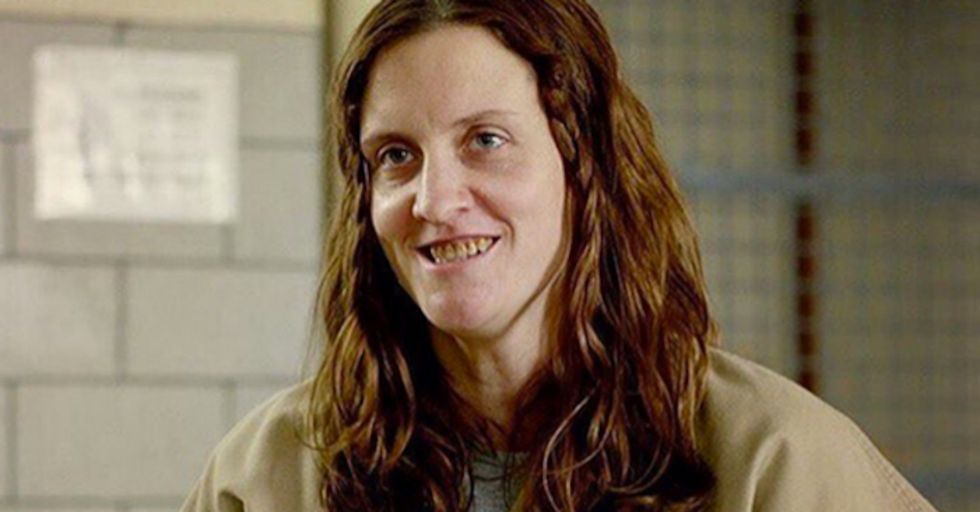 When you're on a prison drama like Orange Is the New Black, you don't exactly get to look like a glamorous star most of the time.

Just ask Julie Lake, who plays the drugged-up inmate Angie, whose teeth and rugged looks leave quite a bit to be desired. But her transformation from civilian to inmate doesn't take quite as long as you would think it would.

"I wish I could say it takes three hours to make me look hideous, but its probably like...the makeup alone is two minutes and the hair is twenty," Lake told TooFab.

"It's amazing how hideous you look with bad teeth," she said. "I remember the first time they did it I looked in the mirror and smiled and burst out laughing."

"It was just endlessly amusing to me at first," she continued.

"The teeth [are] really fast," she said. "They have a palate of colors that's like tobacco stain, nicotine, coffee, dark greens, yellows and browns, it's disgusting. Then they just paint it on, it's like thirty seconds tops, let it dry and good to go."

But when she's not sporting grimy hair and teeth, she looks so different that she doesn't get recognized when she's in public.

"But then when I don't want to be recognized, I am," she said. "I remember when Season 2 came out, I was working as a waitress and doing a Sunday brunch, totally covered in sweat in a gross apron."

"Somebody spread the word I was on the show and everyone wanted to take a picture of me," she continued. "So I'm like, in my apron. 'Look how glamorous it is to be an actress, here's your eggs.'"

But let's be honest — it's probably a good thing that she doesn't really resemble a meth-abusing prison inmate in desperate need of a dentist in real life. Thank goodness life doesn't always imitate art.