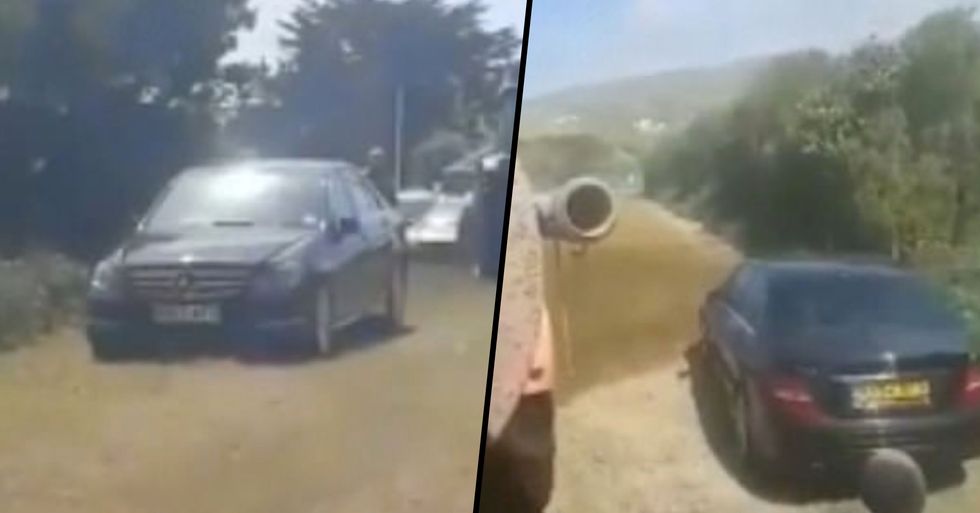 As the rules around lockdown have been lifted slightly, some people are taking it as a sign that they no longer have to social distance, causing beaches to overflow with people.

One farmer in the UK was so furious about one beachgoer's attitude to the overfilled parking lot, he decided to do something crazy.

Keep scrolling for the shocking video, and find out why Twitter is so divided...

The contentious issue of when lockdown should be lifted rages on worldwide.

And it seems many of us are struggling.

It seems that a lot of people have now simply "had enough" of living in lockdown...

And they believe that things will just go back to normal if everything in their community is reopened, including restaurants, hair salons, and gyms. What a world we are living in.

The protests have been endless...

It seems not even the deaths of a staggering number of people can convince people of the importance of maintaining social distancing.

But some things have started to change...

And beaches all across the UK have re-opened to the public too.

Allowing people to get out while still supposedly adhering to social distancing requirements.

Unsurprisingly, this has caused beaches to become overcrowded.

This pic of Southend today is sickening. It’s disgraceful. I feel ashamed and embarrassed to be British. The way th… https://t.co/36lwUUlUcF
— Ryan Bennett (@Ryan Bennett)1590010747.0

And one farmer has suffered the consequences.

As the parking lots fill up, people are looking for free alternatives.

Thousands flocked to the beaches over the weekend in #England. The police are 'fighting losing battle' with camper… https://t.co/iLoVaVLLIy
— BBC Breakfast (@BBC Breakfast)1590471820.0

Illegally parking in farmers' fields seems to be a popular option for some brits.

Which has resulted in a farmer taking matters into his own hands.

And people are totally divided by his actions.

A farmer in the UK has resorted to covering a Mercedes Benz in dirt.

After the driver parked on his land so they could get to the beach.

The tractor driver spread muck all over the luxury car on his farm in Cornwall.

The footage emerged after thousands flocked to the coast for the bank holiday weekend.

In the clip, the farmer can be heard talking to his child next to him.

"The beach is nice and busy today - everyone social distancing I suppose. That busy, they've decided to park in the field."

His child asks what the farmer plans to do.

At this point he can be seen driving straight for the car.

He sends the muck flying out the back of his tank, firing it all over the black Mercedes.

The countryman clearly has no remorse about the whole situation.

"I hope you have as much fun washing your car as I am going to have painting it for you."

The footage has been viewed over 27,000 times, and it's fair to say the clip has divided social media.

@BethMatthewsz OK,I’m a farmer & can’t help feeling this was slightly unnecessary & there seems to be a small child… https://t.co/kK4sVByVZd
— Twitcher Spud (@Twitcher Spud)1590317999.0

Some defend the farmer, while others side with the Mercedes owner.

"If you're going to the beach and there's nowhere to park, don't illegally use a farmers field... especially when they are spreading slurry. Only in Cornwall."

"Personally I don't see a problem with the farmer doing this, if you have the stupidity to park on someone's property illegally then I'm afraid you deal with the consequences he got of lightly, park on my drive and you would be blocked in for many hours to come."

Clearly people can see why the farmer acted in such a way.

But was he too harsh on the Mercedes owner?

One man wrote: "I am sorry, I think it is mean and horrible. Used to live in Cornwall and loved it but this is disgraceful."

"He did it on purpose for no good reason at all. Obviously even this damned virus situation hasn't changed some people for the better."

Keep scrolling for the ridiculous rant one mom made about beachgoers even though she did the exact same...