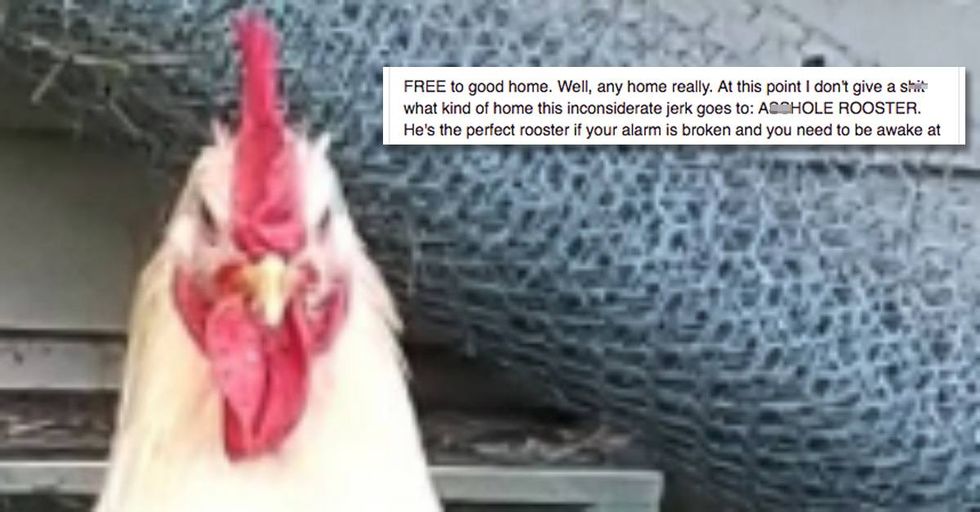 We've all made bad decisions in life. Sometimes they are short and painless but other times, the consequences of our actions last a while. Like they did for this woman, and her terrible mistake of a house pet.

Denell McCaul, a Facebook user and if her profile is any indication, generally a lover of animals, recently went on an EPIC rant about how sick and tired she was of her pet rooster.

McCaul says upfront that the rooster is free to a good home, but she may want to toss in a few bucks to get it out as soon as possible.

The language on her post was Not Safe For Work, unless you work on a farm, where evidently anything goes.

McCaul wrote: "FREE to good home. Well, any home really. At this point I don't give a shit what kind of home this inconsiderate jerk goes to: ASSHOLE ROOSTER. He's the perfect rooster if your alarm is broken and you need to be awake at 5:30 a.m. That is his only setting, 5:30..."

"...He has no snooze button but will be quiet just long enough for you to fall back to sleep and then he'll start back up with his obnoxious cock-a-doodle-doing right outside of your windows. It's like he knows where you sleep and can zone in on that particular window so maybe he has some sort of special x-ray vision where he can see sleeping people behind walls. He is also a perfect rooster if you want to start running... around your yard... while you're trying to get away from him."

"...He no longer goes after me as he is also an instructor of interpretive dance. Or at least that's what I imagine it looked like as I went after him flapping my arms, jumping up and down, kicking at him, yelling and screaming, and swinging a mop in his direction..."

"...So, if you're looking for an alarm clock with the only setting being 5:30 a.m., a personal trainer and a dance instructor, I have the perfect rooster that is able to fill all 3 of those positions FOR FREE! But you're coming out to catch this asshole, I want to see your first interpretive dance lesson." Honestly, I'm beginning to feel a little sorry for the rooster!

Now, granted, we are poking a lot of fun, but if you look through her albums, she clearly cares very much for her animals.

Some of you may think she is over-reacting.

But those people have probably never lived in close proximity of a rooster. I have. And lemme tell ya: it ain't pretty. Sure the first time or two it's cute. But it gets old REAL fast.

And also, they are kinda terrifying.

Look at those eyes! And that beak! EEK!

Some of which seemed to be quite understanding.

While other commenters had their own ideas on how to handle it.

Some of them leaving absolutely nothing to the imagination.

One of the most enjoyable parts of the lengthy thread was reading peoples' own rooster horror stories.

And seeing the photographic evidence that came along with it.

According to some, what McCaul is experiencing is nothing short of a right of passage among those who care for them.

While that may be true, I'm pretty sure she won't be changing her mind on whether or not to rid herself of her "A**hole Rooster" nemesis. As of press time, no one had taken the squawk-meister off her hands. But with her post achieving 70,000 shares (and counting) hopefully someone will come by before the grumpy bird ends up on a dinner plate.