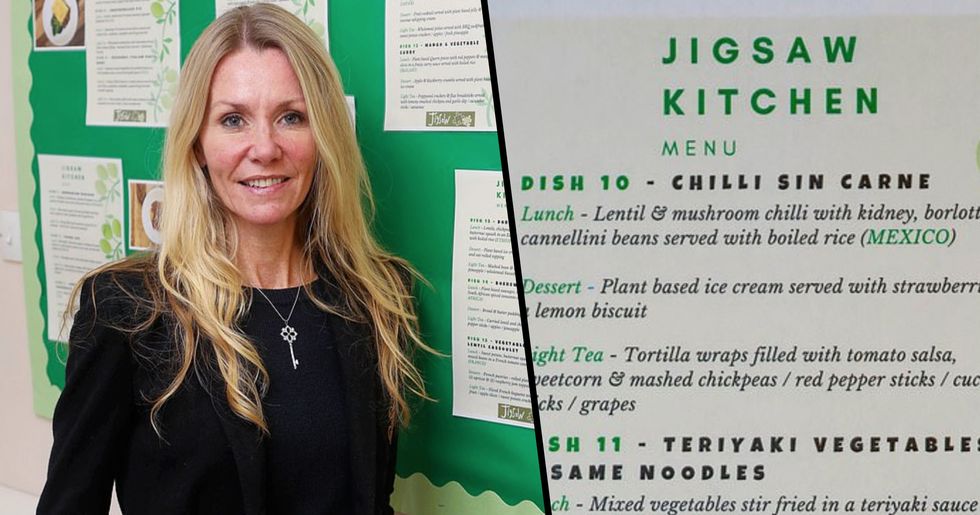 It's a sensitive issue. I guess there's nothing really more personal than a discussion as to what we should and shouldn't be allowed to put into our mouths.

Daycare, Jigsaws Curzon House, situated in Chester, England, has recently made headlines for being the first to make an entirely vegan menu. This means that come the new year when the menu is implemented, all the kids will be eating exclusively vegan.

Some of the parents are not happy about this.

Continue scrolling to see why this daycare could be monumental in the leap into environmentally-friendly eating, despite some of the vegan meal horror stories of the past...

Look, I get it, your kid isn't a bird. Your toddler likes snickerdoodles and red vines and cheesy fries. We all do! But there's no harm in learning about all different foods when you're young, right?

Jigsaw nursery makes a real effort to educate the kids.

From the cooking process to teaching the children where the food comes from. The nursery as a whole believes in educating the kids about what goes into making the plate of food that is put in front of them.

The nursery even ran a foodbank trip.

Chester is a relatively affluent area in the North-West of England and the children attending the nursery probably have fairly well off parents. Given that the daycare costs are around $310 a week... The nursery wants the children to understand that not everyone has food plated up for them so easily. By taking the nursery groups to the local foodbank, they help the children understand poverty.

What about the picky eaters?

Of course, there is no-one more picky about what's on their plate than a young child. There are some parents that are probably concerned the menu change will not sit well with the fussy eating habits of their child.

That being said, the menu was already pretty diverse.

The current menu, which is still advertised on the nursery's site shows a diverse selection of dishes. With an excellent idea of having a different country's cuisine each day, the nursery ensures that all the children grow a diverse palette.

Many support the changes.

By going meat-free, the nursery is taking a big step in helping the planet.

But will the new menu upset the kids?

Many parents are annoyed that they were not consulted about the new menu and they are concerned their kids won't like it. I'd argue that kids are very adaptable and I'm sure that they probably won't even notice.

Up until now, the nursery has been really popular with parents.

The day nursery has rave reviews on their Facebook page, with most parents giving it a 5-star rating.

Parents just want what's best for their little ones.

Anything that can threaten this bubble they have their kids wrapped up in can cause all kinds of outrage. Parents have been speaking to the national press. Let's hear what some of them had to say, shall we?

"To go veggie is one thing, but to go full-on vegan is just madness."

One parent who has a kid at the nursery anonymously spoke to The Mail and said: "To impose a lifestyle choice on these children before they can make their own mind up is plain wrong. If anything it discriminates against those kids who enjoy a diet of meat and fish. To ban them from eating meat is outrageous. It's simply not their decision to make. I like to think I cook healthy and nutritious meals for my children which include meat and vegetables. My son has a big appetite as well, I think he'll come home starving. To go veggie is one thing, but to go full-on vegan is just madness."

"There's obviously no cheese, which my daughter loves."

In another complaint, an anonymous parent was concerned her child wouldn't get her favorites. She said:

"If my daughter wants to be a vegan when she's older then that's fine but I'll have that conversation with her myself. There's obviously no cheese, which my daughter loves, and no meat or the goodness from fish. It's such a huge, drastic change and I'm not happy about it."

"If anything, it takes the pressure off having to feed him uber-healthy food at home"

One parent, Natalie Stevens, could certainly see the bright side of the situation.  She wrote on Facebook: "It's like saying you don't want your children to be educated in what will save our planet. Vegan or not, this is an incredibly healthy-sounding menu and I am thrilled our son will be eating this kind of food."

But my favorite part of her comment has got to be when she said, "If anything, it takes the pressure off having to feed him uber-healthy food at home because I know he'll have had a wholesome and nutritious meal at nursery." I'm not quite sure that's the point of the new menu, but ah well at least she's on board.

I mean it's not exactly potato chips and houmous, is it?

So long as the kids enjoy what they're eating.

I'd argue that any concerned parents such just wait until the menu goes live to voice any issues with it. If it just so happens that their toddler enjoys the new vegan menu just as much as the old menu, then no worries, right? Vegan cuisine has come a long way, so now delivering a low-quality vegan option just isn't acceptable. Try telling that to major airlines though...

Daycare might have wicked vegan menus but airlines have a long way to go.

Trust me, after you read this list of the 15 worst vegan dishes served by airline companies you will completely agree.

"They provided a vegetarian option on request for my partner but no vegan for me. Also, it was a very unhealthy pastry. Not a big issue when we were only on a 1-hour flight - perhaps their provision is different for a longer flight."

"Disappointed by my 'vegan' breakfast that wasn’t actually vegan (honey oat bar). Also, would love Norwegian to realize vegans can eat more than just fruit! There are plenty of vegan options these days and I was disappointed by their reliance on fruit to cater for vegan meals."

"My daughter flew Manchester-San Francisco on 28.5.19 - an 11hour flight. She had pre-booked her vegan meal and confirmed it in a telephone conversation with the airline. The air steward argued with her that no meal had been booked, until she produced a confirmation email to him. An hour after everyone else had been served, the steward produced an apple for her. At that point she hadn’t eaten since breakfast at 7am, the flight left Manchester at 11:55am. You shouldn’t have to expect to take precautionary extra food on a flight with you when you have pre-ordered food. Non-vegan passengers wouldn’t be expected to do this. She didn’t have room in her hand luggage as space was limited due to her traveling to work in the USA for 3 months. By the time she got off the plane and through customs she hadn’t eaten in almost 20 hours."

"The vegan food was absolutely tasteless and I do not know how it held together because it had no texture at all. So on my way back I decided to have a fruit meal instead and this was even worse! It consisted of two unripe plums, bun, butter and bottle of water! Since when are bun and butter considered to be fruits? And this was supposed to cover half of the 10-hours flight…"

"Flew round-trip from Philadelphia, PA to Atlanta, GA, then back so flight was not long enough for full-meals to be served. However, snacks were provided but only of the junk-food variety, i.e chips, pretzels, cookies, together with Coke, Sprite, or Iced Tea, none of which are vegan. No vegan options were listed in the menu's provided as well."

"Just a couple of weeks ago I flew with Eurowings again and as always there was nothing vegan offered to eat apart from a bag of crisps. For years this company has been offering cheese sandwiches to vegetarians, failing to understand that cheese is not even vegetarian, because it has been curdled with calf rennet."

"We booked vegan meals at the time of booking but on the flight to be told they weren’t there (in fact they said we weren’t even on the passenger list, despite the fact that we obviously had boarding cards – not terribly confidence inspiring). Attached is a picture of what they came up with, for our evening meal – banana, apple, orange and a packet of crisps."

"I bought a small tub of pringles as I was hungry and that was all that was available that was suitable. AND this small tub cost over twice as much as a large one in the supermarket. No plant-based milk available would have loved a cup of tea!"

"Plain rice, steamed carrots, string beans and some grilled tomatoes. White (stale) bread roll with margarine. Dessert was fruit slices if I remember correctly. Bring your own food. On the plus side at least it didn’t cost anything, but they did charge for all alcohol."

"I was told there was a vegetarian option only. I asked for a coffee with plant milk and the flight attendant said , 'we do have semi-skimmed milk.' I really wanted a hot drink so I asked for hot water, they filled up a cup and asked me for £1.50!! I refused to buy it. "I was so disgusted that I had no food, no coffee or tea with plant milk and was charged £1.50 for hot water, I said the airline was offering a very poor service for Vegans. There was no apology at all nor acknowledgment to my comment."

"The meal was a gruel-like yellow rice mush (maybe supposed to be risotto?) mixed with sweetcorn, tomato and some chewy bits of asparagus. The salad was provided with dressing which was nice and the fruit seemed fresh but the bread roll was hard on the inside and stale. I’m sure it wouldn’t be hard to do better than this! Later when we were given breakfast I was only offered a non-vegan muffin with no explanation as to why a vegan option wasn’t provided."

"Can’t fault the crew or the actual flight...just the food. Unfortunately, the only vegan food on the menu was chips. The only hot drink option was black tea or coffee."

"The main lunch provided on my flight was barely edible – undercooked (15 pieces of) pasta, with a smattering of tomato sauce and a couple of limp vegetables. Later when the other passengers got an afternoon tea snack, I was offered the same dry onion-y salad and under-ripe fruit bowl that I had been given alongside my lunch previously."

"No actual meals were available, however the steward did point out a small Graze box of bbq nuts in the menu which were vegan, and the water. Very poor."

"Main meal was plain rice, peppers and onions with a side salad… disappointing. Got served BUTTER twice. Had a poor vegan snack of a cucumber and tomato sandwich, no spread or anything. Breakfast was a banana, bagel, jam and juice, no vegan margarine and no soya milk or milk alternative which was especially disappointing especially with the fact Starbucks are partnered with Delta." For more vegan fails, scroll on for a time when Pizza Hut seriously dropped the ball.
20%