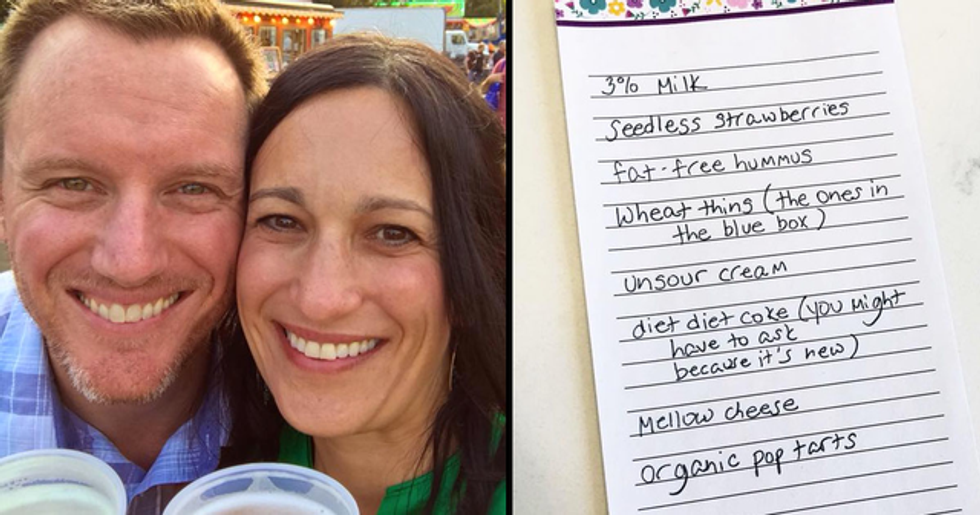 There's something about a significant other that can really just get under your skin. Sure, you love them and you're lucky to be with them - but boy, oh boy, can they be irritating. And once in a while, they'll do something so aggravating that action must be taken.

Such was the experience of one Karen Alpert. The US-based mommy blogger, better known as Baby Sideburns, was so annoyed with her hubby that she took an act of hilarious revenge. She wrote out an ingenious list of products and sent her hapless husband off to the store to face the consequences of his laziness. Want to see the list? Scroll down to the bottom of the article!

The internet had many responses to the prank, with some sharing similar stories, while others stood up for the joke's victim. One thing that everyone agrees on though? The items on the list are absolutely inspired.

Marriage is supposed to be a celebration of love and commitment.

Two people getting married is a way of proving a lifetime of love to one another, plus you get to celebrate that love with all your nearest and dearest family and friends.

But, as many will tell you, marriage isn't all good times.

Even though you love and support each other, having your life inextricably wrapped up in someone else's means they can also be a huge annoyance.

All couples have moments wherein they just cannot stand each other.

It's totally natural, and knowing how to handle these instances and get past them is the real key to a healthy, long-lasting relationship.

Which is something that one mommy blogger knows all too well.

This is Karen Alpert, a mom-of-two from Chicago, Illinois. She might be better known under a different moniker, though.

Her pen-name for her successful blog is Baby Sideburns.

Alpert has also written two books on parenting. Her 2013 title, I Heart My Little A-Holes, was a New York Times bestseller, and her follow up, 2016's I Want My Epidural Back, was similarly well-received.

Alongside her use of humor, the writer tackles some of the most prevalent and important parenting issues of the moment.

Her accounts aren't only self-promoting.

Alpert also shares words of wisdom and brilliant jokes by other parents, fostering a real sense of community on her page.

Her accounts are also full of parenting memes.

She claims that she started her blog as a way to "make parents laugh. Because laughing is a helluva lot better than crying."

It's clear that there's a heart underneath the laughs.

Alpert is dedicated to making parents feel less alone, afraid, and worried that they might be incompetent. Her page is a place for affirmation and reassurance.

Alpert is a two-time parent.

She has a daughter, whose name is Zoey, and a younger son, Holden.

But she isn't in it alone.

Alpert is married to the father of her kids, although she keeps his identity a little more under wraps.

For example, she's not shy about detailing the ins-and-outs of her spousal disputes - and is even pretty open about how she exacts her revenge. Want more details? Keep on reading.

Alpert never pretends that being a wife and a mother is easy.

She often details spats that she has with her kids and husband online, showing that being picture perfect just isn't anyone's reality.

She claimed that her husband had been so lazy that she felt the need to punish him for it. And the venue she chose? The grocery store.

She used a well-timed trip to the store to exact her revenge.

Alpert managed to pull off a truly excellent prank to punish her husband for laying on the couch all day, not helping with the chores.

The way she did it?

With an ingeniously composed "shopping list." Alpert sent her hubby off with a selection of products that were a little bit out of the ordinary.

The wronged-wife then took things a step further.

Knowing that her hubby would have some issues finding items on the list at the store, she turned off her phone, so he couldn't even call for clarification.

So what was so special about the items on Alpert's list?

Well, they didn't exist - but they sounded just plausible enough that they potentially could exist. One of her inventions was "3% milk."

There were a ton of highlights on her shopping list.

One of our personal favorites is "Diet Diet Coke." Knowing the product wouldn't be on the shelves, Alpert went a step further by adding the direction, "you might have to ask because it's new."

We think we can all agree that it's absolutely genius. The products actually sound believable, meaning her husband was unlikely to suspect the prank.

The image of the poor guy in the grocery store is pretty funny.

And it seems that the internet agrees. The post quickly went viral, attracting a lot of attention from both amused wives and angry husbands worldwide.

Some thought that Alpert might have got her dates mixed up.

She posted the pictures last week, a few days before April 1st, which is better known as April Fool's day, the accepted time for maximum pranking.

One laughed, "I sent my man to the store for black pepper and he text saying 'I only see red green and yellow peppers. No black."

Others thought that the trip to the store was punishment enough.

One wife complained, "To my husband, even a regular list would pose the same challenges."

Many thought the prank was hilarious.

And it seemed to particularly resonate with those in a similar position to Alpert. One Facebook-user commented saying that she "works 7 days at home keeping house & raising kids on 24-hour shifts, unappreciated by lazy husband who thinks there are such things as days off when you have kids."

In fact, maybe some lazy hubbies should be scared.

It seems that Alpert has been a source of inspiration to the over-worked wives and mothers of the world, many of whom claim they're thinking of copying her!

Although not everyone found it so funny.

A select few thought that the act was petty and even a little cruel.

But we aren't too worried.

If her husband's laziness extends to his shopping habits, we're pretty sure he'll be fine. As one commenter put it, "Jokes on her. All he read was: Milk, Strawberries, Hummus, Snack chips, Coke, Pop-tarts. He'll be home in 25 mins and twenty of that is driving."