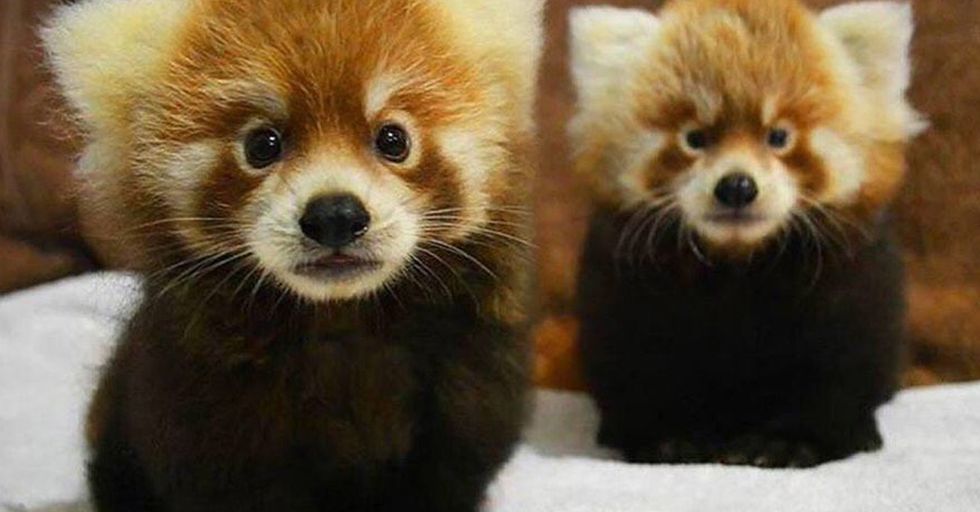 Absolutely Adorable Animal Photos That Made Us Squeal With Glee

There's nothing more enjoyable than clicking through a million photos of animals. Big, small, funny, surprising, animal photos are the ties that bind us all.

Especially now, as Australia burns and photos are flooding in of koalas and kangaroos, let's enjoy what our planet has! Luckily, @41Strange on Twitter finds the best of the best photos of animals on the internet!

Yes, even octopi were babies once.

Octopi get so large, it's shocking that they start as small as a finger tip. Also, fun fact, they're crazy smart and can get themselves out of almost any container!

Are anteaters the new sloths?

How cute is this little guy? Literally a little guy! the littlest guy! His face is adorable.

Bears have all kinds of secret skills.

How long until that tree caves under the pressure of that many bears? That's a word problem that would have made AP Physics way more fun.

Farm dogs and cats must have been truly wonderful in a previous life to earn this version of heaven.

They technically don't have a "butt" but sure looks like that do from this angle! Who else feels the sudden urge to do a million squats?

You know what they say, all beak, no bite.

Imagine if your mouth was 5 times the weight of the rest of your head.

I WANT WHATEVER THIS IS

What a cute little creature! He's like a small meerkat with a hedgehog face! I'm all in.

The apple doesn't fall far from the tree.

The son isn't great at blending in yet. But, wow, that would have been so fun as a kid: to climb all over the bigger version of yourself.

Just a bat and a teddy bear!

Bats, lowkey, have one of the cutest faces in the animal kingdom. But, thanks to Dracula, they have this terrible reputation. Let's reframe the bat in 2020!

Someone isn't great at hiding

This little meerkat trying to avoid the camera is like Kristen Wiig in SNL doing the character that says, "don't make me sing!" That little guy wanted the attention.

Ok, get this raccoon in an orchestra ASAP

I want to know what he thinks he was playing. Sprinklers must seem like sorcery to animals.

This turtle birth is creepy AND cool

Turtles live forever, just ask Sylvester Stallone. But, just like everything, they start so small! And kind of like aliens!

You know what the say about the size of someone's feet...

This bird as the weirdest feet in the bird world. What could the evolutionary reason possibly be? They look drawn on by five-year-olds.

Jurassic Park 12: Return of the Hedgehog

Hedgehogs have become an internet darling and deservedly so: they are terribly, terribly precious.

What more could you possibly need? Those otters have it all figured out.

How can a bat be so small?

Are bats good pets? Does anyone know? Could you get two of these and name them Harold and Maude?

A sea slug that looks like an animated sheep? Yes please.

Also, this living creature gets its energy from the sun! That's so incredibly dope! Maybe the answer to climate change was where we least expected this whole time.

What's better than one panda?

These red pandas are adorable and also remind me of the twin girls in The Shining. It's a roller coaster.

Sphinx cats get a bad rap but, c'mon.

They do kind of look like a wrinkly bat from another dimension and/or animated show but I would still snuggle 10/10 times.

What a cute rolly-polly cat.

The little almond-shaped grey patch? Perfection. If he didn't do the reach in the second picture, he would almost look fake.

You never expect a picture of a duck to be surprising. But, this bunny duck is a marvel of nature.

This duck is unfazed.

You would almost think this landing was intentional. But, it couldn't have been, right? His face is beyond chill. He's the Future of ducks.

The nails are longer this his ears!

Black cats are considered "bad luck" and, as such, they're under-adopted! Adopt black cats! Look how sweet this one is, even with his claws out!

It's an In Real Life Ferbie!

This is the animal version of Caelynn from Colton's season of the bachelor. Uncanny, right?

We got a man on the ground

Corgis are known for their short legs and it's never more clear how short their legs are until they're turtled like this. Hilarious.

With that white face, this mouse is a spitting image of the most famous mouse of all -- Mickey!

This bird is resourceful AF.

Using a stone to break open an egg? Ingenious.

This bird must be a Scorpio with Sagittarius rising.

He's dark, he's brooding, but with flair! if he's not a Scorpio, I resign my amateur astrology degree.

Who's a pretty bird?

Love birds. Simple, elegant. So beautiful. They mate for life. I could look at 30 pictures of just these birds!