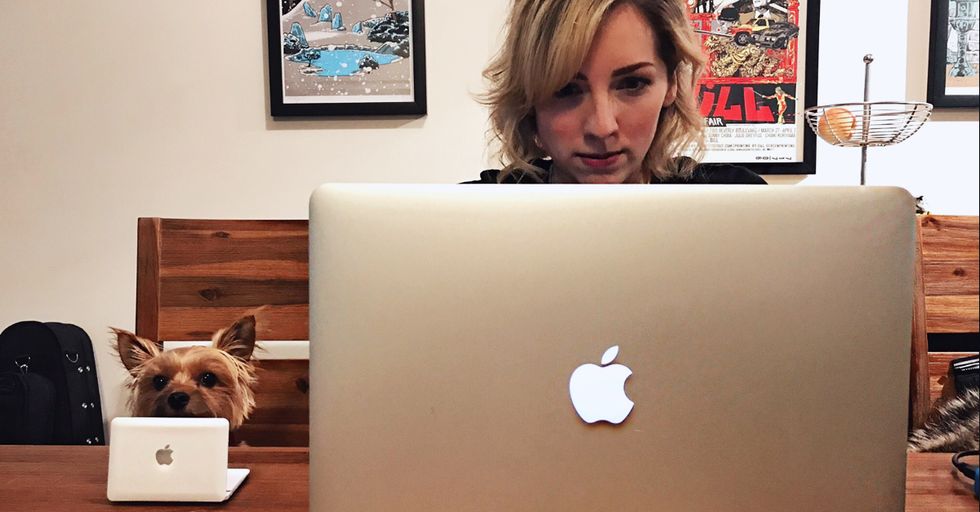 19 Animal Pictures That Will Make You Spit Out Your Coffee

Good morning! What you really need today, whether you know it or not, are these 19 hilarious photos of some truly extra animals.

So maybe get a napkin or something. It's fine. I'll wait.

This pup who won't stop believin'

Why does it look like her ears are blowing in the wind? There probably isn't a breeze on the subway. Maybe it's one of those magical movie-moment breezes.

Oh my god. I might start not-so-accidentally shrinking my clothes in the washing machine. My dog would look great in all my sweaters.

No caption needed. One question, though: How do you think birds shave their legs?

Wow, what a helper. My dog is literally asleep under a blanket next to me as I write this, like the incredible moocher he is.

This pair of lovebirds

She really looks like the Kiwi's shadow. They were totally made for each other! The next pic is possibly the most dashing dog in the world...

Is this one of the Queen's corgis? How else do explain his grace and poise?

If there was ever a dog that deserved a professional photo shoot, it's this perfect pup right here. This way, when he's grown up, you can show him photos of when he was younger and laugh about them together.

LOOK. Look at how happy this dog is to meet Pluto! Have you ever seen such a big smile?! The answer is no you have not!

Do you think he actually knew that it was him on the local news? I think he definitely did and he was rightly proud of himself.

I'm going to say it: All Ubers should have dogs. The end, thank you for coming to my TEDTalk. The next one will make you squeal with delight...

This gaggle of owls

OK, but if you were a newborn owl looking at a human's office for the first time, you would also look this surprised.

You can't blame them. They're chickens. Chickens are not smart. Which is a thing I keep telling myself to justify how many of them I eat.

But with that cute face, she literally can do anything she wants. Because I will do anything for her.

Never has a dog looked so at home in a backpack. She's really killing the traveling-by-backpack game. This next one may have armor, but that doesn't mean he's not vulnerable...

"Um, excuse me? Yes, thank you. I just want to tell you that I really like your hair. See, I have scales, so it's just not as soft. But I swear I am soft on the inside."

This cat on a cat

It doesn't get any more meta than this, folks. I can imagine the conversations now: "We named him Cat." "Oh, because he's a cat." "No, because he has a cat on his back."

"Why do they call me a bald eagle? I'm clearly not bald. I have feathers everywhere. That's just mean."

Honestly, I think if you just give her a noodle you might be her bestie for life. Pretty sure she only cares about the noodles.

No joke, this is the best video on the Internet. Every time I see it, I laugh out loud. So, you're welcome, and please share this with someone who would appreciate it.