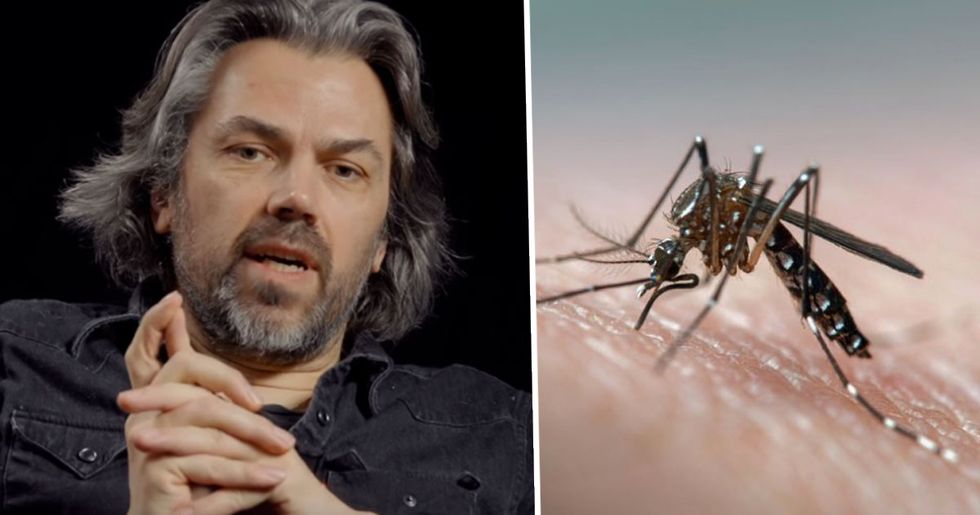 The "Animal Rights" movement has been gaining more and more momentum, with a growing number of people deciding that they want to choose a more "ethical" way of living life. The activists pushing this idea forward always have a lot to say when it comes to standing their ground.

While I am all for animal rights, activists have also been known to say and do some pretty weird things in order to raise awareness about the things that they are passionate about. But, hey, whatever gets people talking! And this particular French activist managed to do just that. He had some pretty odd reasons as to why we should all let mosquitos drink our blood... Yes, you read that correctly.

Stick around as we unfold the full story, including the reasons as to why he believes this.

Animal Rights activists have been known to do some pretty weird things in order to raise awareness.

I mean, if you feel really passionately about the issue, it only makes sense to go big or go home, right? But some of these people have taken things a little too far...

I'm sure you've heard about this all over the news.

Pictures such as this one have been circulating all over the internet and the public seems to be divided as to how they should react. Some support the issue, while others reject it. Some of us, however, are just slightly creeped out...

This group in California learned a valuable lesson about raising awareness...

"Direct Action Everywhere" is an Animal Rights group that decided that the best way to help animals was to raid a slaughterhouse and chain their heads to a slaughter machine. That can never be good, can it?

What was supposed to be a protest against animal abuse took a nasty turn...

Sometimes, things don't always go to plan. After releasing some of the ducks that were trapped in pens, the group decided that they would enter the actual slaughterhouse and chain their heads to the machines in order to make a statement.

Little did they know, the machines would start up and drag them towards their deaths...

The slaughter line started to move, taking the activists with them. In the horrible video, you can hear them screaming as they move closer to the knives.

One of them recalled the horrifying ordeal later on.

In an interview with ABC7 News, Thomas Chiang, who had his head dragged into a pole said: "It was almost decapitating my head from my neck. I was feeling my life leave my body, as I was struggling to get out of that lock."

Luckily, there were no deaths, just minor injuries.

However, I don't think that they'll be storming any more slaughterhouses any time soon. Keep scrolling to see the shocking video, but do be warned, it contains some graphic content.

Now, countries around the world are imposing harsher punishments for stunts similar to this one.

In Australia, the Federal Parliament has introduced tougher penalties for activists who break into farmhouses illegally, including up to 5 years in prison while other kinds of protesters are looking up to 600 dollars worth of fines.

It's going to be difficult to deter passionate activists.

Because they feel so strongly about the issue at hand, most continue to raise awareness, despite the consequences looming over their heads.

And it is no different for this man, who has made some pretty bold claims.

Recently, a French activist has hit the headlines for his comments about mosquitos and why we should allow them to drink our blood.

Aymeric Caron, a television presenter, urges us not to kill mosquitos...

Instead, we should allow them to take "blood donations," as he likes to call it.

"They are only getting the protein they need!"

As reported by the Independent, the insects apparently want to gain protein for their eggs so that they can breed the next generation of blood-suckers.

Aymeric Caron is, himself, an anti-specist.

But he claimed that it is "embarrassing for anti-specists who realize they are being attacked by a mother who is trying to nourish her future children."

However, he did mention that there were exceptions to this rule.

Even though killing mosquitos is not acceptable in the eyes of many Animal Rights activists, there are some scenarios in which it is unavoidable. He claims that, if you live in, or are traveling to, Africa, you're allowed to kill mosquitos due to the risk of catching Malaria.

In order to stop being bitten, one must "use garlic" or "lavender."

He also advised that people should wash regularly to keep the insects away.

But Malaria is a disease that affects more than just Africa...

According to Treated.com, Africa, India, and parts of South America are widely affected by the disease too, but if you're sticking by Caron's rules, you're not allowed to kill them in those countries. I can see some pretty important flaws in this theory...

Mosquito bites are a common occurrence all over the world.

Female mosquitos use the sharp tip of their long mouths to pierce a blood vessel and draw blood out. However, this is the problematic part. As it is doing so, the mosquito releases saliva, which contains a harmful anticoagulant, back into the body.

A female mosquito has no choice but to risk her life for her babies.

So, according to Caron, we should give them the chance to suck the protein out of us so that they can feed their unborn children. He even claimed that he allowed himself to be bitten in France multiple times because he felt like he was helping them in some way. But, in Africa, it was a different story. He killed them there.

Animal protection workers have explained that his views are "a step too far."

A British animal-protection group has spoken out against him, saying that it was "an unhelpful distraction" from the real issues that we must focus on.

So, thanks for the advice, but we'd rather not.

I think it's safe to say that we will not be allowing mosquitos, or any other kind of insect, to feed off of our blood. As unethical as we may seem in Caron's eyes, we'd rather stay disease-free. There are more helpful ways of protecting animals, but maybe don't do what these guys did in the video you're about to see...

Here's a look a "Direct Action Everywhere" storming a slaughterhouse.

What have we learned from this? That there are plenty of safer ways to stand up for what you believe in. As ridiculous as some Animal Rights activists can be, turns out, meat-eaters can be just as bad when preaching about the things that they believe in. Did you hear about the guys that ate raw squirrel to prove a point? Keep reading for more on that...