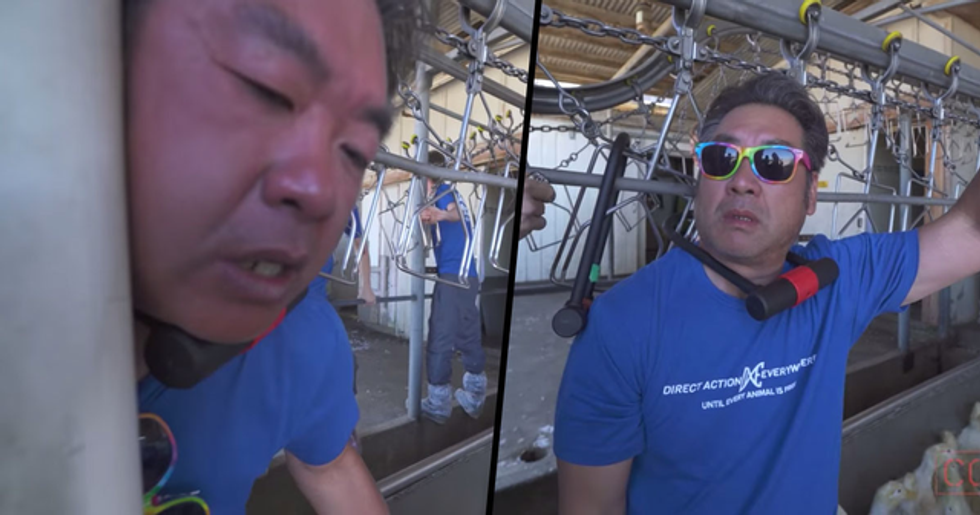 The vegan and vegetarian lifestyles have boomed in recent years, with more and more people fighting for animal rights and liberation. And this growth of animal rights groups has ultimately resulted in more slaughterhouses, butchers, and restaurants being stormed by protestors, all in an attempt to bring an end to the killing of animals.

But these protests don't always go to plan. One group of animal rights activists found themselves in dangerous waters while storming a slaughterhouse in California. With one member filming their protest, the activists can be seen chaining themselves to the slaughter machine, which is when disaster struck.

Though, let's face it. Chaining your head to a slaughter line was never going to end well, was it?

Keep reading to watch the grizzly video, though be warned: It isn't for the faint of heart.

Animal activists know how to make a statement.

Never ones to beat around the bush, animal activists are known for their over the top and eccentric ways of communicating their beliefs.

Whether they're forcing the public to watch graphic footage from slaughterhouses, or laying on a table covered in fake blood while being "carved" with a giant knife (we can't make this stuff up...), these activists will go to extreme lengths to fight for animal liberation. You have to admire their enthusiasm, though.

And they're often making headlines with their antics.

Like the time that animal rights group, PETA (People for the Ethical Treatment of Animals), staged a "dog BBQ" in the middle of London. Don't worry everyone, the dog was fake. But still, it was quite a shocking and, quite frankly, disgusting sight.

Who remembers the time that PETA blamed milk for autism?

When they're not causing outrage with graphic and bloody stunts, they're enraging people with their outlandish and somewhat dramatic claims. Like this assuming statement about the link between autism and dairy. Keep reading to hear about another ridiculous stunt that PETA has pulled in the past.

They're not afraid to go on the front line for animal liberation.

Animal activists have never been ones to shy away from the gory reality of slaughterhouses. Many different groups have stormed slaughterhouses in the past, and have often resorted to chaining themselves to machinery or releasing animals to halt the slaughter process.

Chaining yourself to heavy machinery that is designed to kill animals is always going to be risky business, isn't it? One activist group found that out the hard way when their storming of a slaughterhouse went horribly wrong.

The group in question are known as Direct Action Everywhere.

Hundreds of protestors had visited the farm that week.

But one small group actually managed to access the site and make their way into the slaughterhouse.

They were met with a horrible sight.

Once inside the slaughterhouse, they faced hundreds of ducks awaiting their violent deaths.

They split off into two groups.

One group ran into one direction in an attempt to free the ducks that were still alive, while another group entered the actual slaughterhouse.

Once inside the slaughterhouse, the group took action.

Upon entering, they found a slaughter line full of ducks, hanging by their legs on their way to be killed by machinery. One member of the group hastily shut down the slaughter line so that it was brought to a halt.

This is when things got dangerous.

Once the slaughter machine was stationary, the group swiftly produced bike locks from their bags and set to fastening their own necks to the shackles. We're not making this up, we swear.

The procedure began smoothly and the group were able to chain themselves to the machine with next to no interruptions from the farm's staff.

But then disaster struck.

The slaughter line started to move... with the protestors still firmly chained to it. In the shocking video, the terrified protesters can be heard screaming, "stop this right now!" as they are slowly dragged along the line. One protestor, named Thomas Chiang, had his neck and head dragged into a pole.

He started gasping for air.

Chiang, who spoke in an interview, described the horrifying moment: "It was almost decapitating my head from my neck. I was feeling my life leave my body, as I was struggling to get out of that lock."

Once released from the machine, Chiang was taken to the hospital.

Chiang was lucky to escape with minor injuries. Though he was aware of the dangers that his actions posed, he claims that he and the rest of the group were left with no choice but to take drastic action: "We have to escalate all of our actions because this is a global crisis we're under."

You can watch the dramatic footage here.

The ten-minute long video shows the full series of events unfold. (Tip: It all kicks off around 4 minutes in).

Exactly who re-started the slaughter machine is still unknown.

According to ABC News, The Sonoma County Sheriff's Office has looked into the incident. Petaluma's Reichardt Duck Farm remains adamant that the whole incident was an accident and that the employee who turned the machine back on was unaware of the protestors chained up to it.

As for the rest of the group?

The rest of the group successfully chained themselves together at the farm's entrance. Rather than getting their heads crushed, this group opted to silently cradle the carcasses of dead ducks. Well, that's one way to make a statement...

The activists were all arrested.

After freeing dozens of ducks from the slaughter, the activists were arrested and are now facing a number of different felony charges. But this does not seem to faze them. The animal liberation movement is growing, with more and more people, and companies, changing the way that they treat animals, especially before slaughter. Some people are even changing the way that they speak. Welcome back to the conversation, PETA. The campaign group hit the headlines late last year with their list of "animal-friendly" phrases and terms; you have to read this story, it's pure gold.