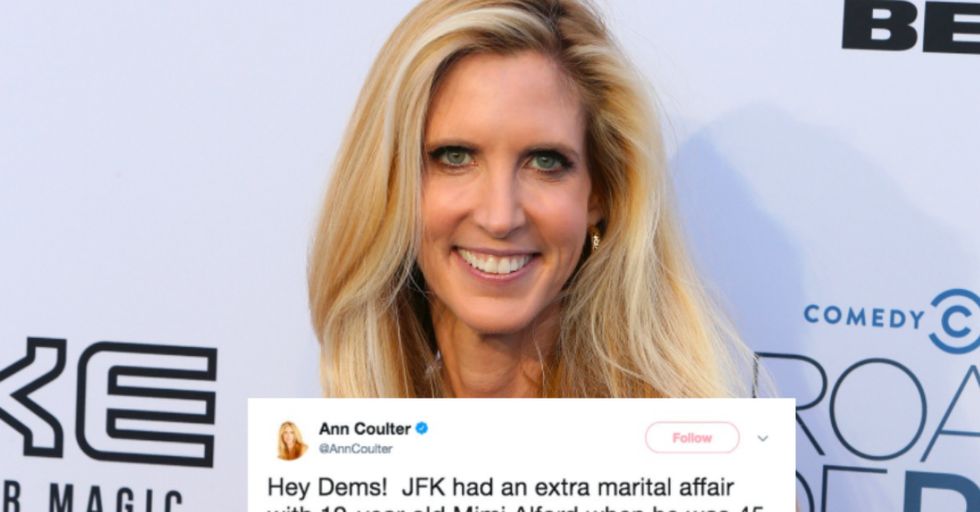 The Washington Post reported that Roy Moore, the Republican candidate for the Alabama U.S. Senate seat, engaged in a sexual relationship with a minor in 1979 when she was 14 and he was 32. Politicians' responses have been varied — many called on Moore to drop out of the race if the allegations proved to be true. One man invoked the Bible and made the claim that Joseph and Mary had quite the age difference, even though there is no proof of this and according to the Bible, Jesus was immaculately conceived (a.k.a. there was no sexual activity, unlike in the instance of Roy Moore and that little girl).

To add crazy to the crazy pile, Ann Coulter ran to Moore's defense with what proved to be an ill-advised tweet comparing him to JFK. People really need to stop comparing Republican politicians to JFK. It never works out for them.

In the wake of the news that Roy Moore had a sexual relationship with a minor, Ann Coulter tweeted, "Hey Dems! JFK had an extra marital affair with 19-year old Mimi Alford when he was 45 years old."

If you read between the lines, it actually says, "Hey Dems! Your beloved JFK was actually a creep who had an affair with a 19-year-old, which is exactly the same thing as Roy Moore preying on a 14-year-old child, so quit being so angry!"

Fortunately, the Internet wasn't going to let Coulter get away with her nonsense, and they immediately clapped back.

Hate to break it to ya, Ann, but 14 and 19 are entirely different. Ages of consent in U.S. states range from 16 to 18, but 14 is squarely below the age of consent (and was in 1979), and 19 is squarely above. According to the law, JFK was perfectly within his legal right to have a relationship with a 19-year-old. Was it creepy? Probably. But illegal? Nopers. On the other hand, Roy Moore's relationship with 14-year-old Leigh Corfman? Decidedly creepy, and 100 percent illegal. Thus, your argument, Ann? Well, it's just plain wrong.

Others responded to Coulter's tweet with this little tidbit of common sense:

You can criticize JFK all you want — he is dead and not currently running for a seat in the Senate. Roy Moore, on the other hand, this creepster is trying to get elected to a seat in the Senate in 2017. The man who preyed on a 14-year-old when he was much older would, if elected, represent the interests of real live 14-year-olds throughout the state of Alabama, and call us crazy, but we have some doubts that he would actually be able to do that respectfully.

Comedian Dana Goldberg, unfortunately, felt that she had to reiterate the obvious to Coulter.

@AnnCoulter Roy Moore molested a 14 year old, you waste of space.There’s a huge difference between that and an affa… https://t.co/13WxeBjctv
— Dana Goldberg (@Dana Goldberg)1510551286.0

What Roy Moore did and what JFK did exist on two totally separate, never intersecting planes. By attempting to make this comparison, Ann Coulter is defending a child molester. Case closed, end of story.

One more time for the people in the back:

In conclusion, JFK's affair and Roy Moore's child molestation are two very different things. JFK has been dead for decades and isn't a current threat to the well-being of actual people who are alive and counting on politicians to represent them, unlike Roy Moore. And oh yeah, if you're so up in arms about JFK's affair, let's not forget that your president, Donald Trump, has had numerous affairs and been accused of sexual assault and rape by dozens of women. Where's your outrage there, Ann Coulter?