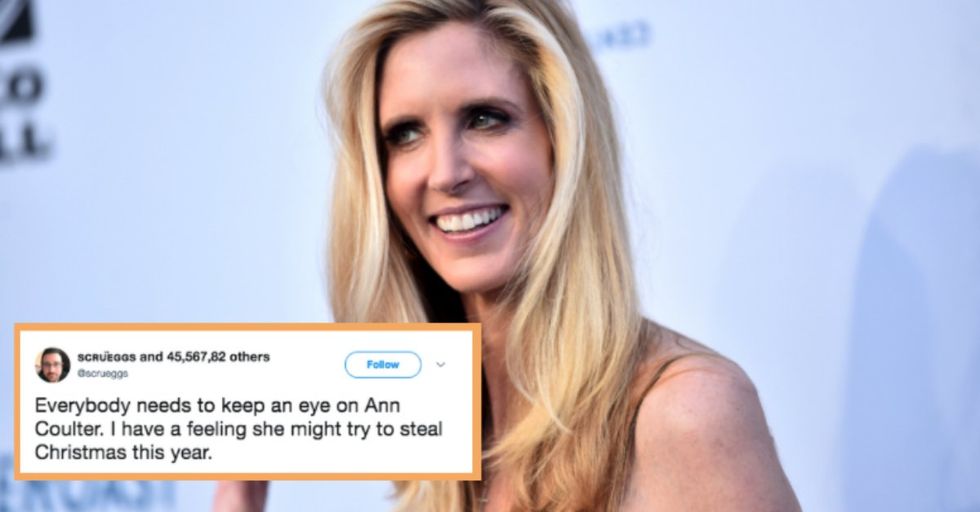 Oh, Ann Coulter. You can always count on her to say something shocking. Things like "all pretty girls are right-wingers" and "I'm more of a man than any liberal." Most of her statements are loony enough to raise an eyebrow, maybe two. But one of her recent tweets is a little more than just shocking. It's honestly almost making us feel a little sorry for the woman. Let's just say we know a bit too much about Coulter's personal life after this weekend.

Ann Coulter is no stranger to making controversial statements.

The conservative political commentator always has something to say — and it's usually at the expense of someone else. And her insults aren't limited to only one side of the political aisle.

Earlier this year, she even had her complaints about Trump.

About Trump! She literally wrote a book about how much she likes Donald Trump. Nevertheless, there she was in September, hinting at his impeachment.

Back when Roy Moore was running for the Senate, Coulter tried to distract from the fact that he is a child molester with the information that JFK had an extra-marital affair.

With a 19-year-old woman. Meanwhile, Moore had a sexual relationship with a 14-year-old girl when he was 32. Obviously, we don't need to explain why preying upon a 14-year-old child is way, way worse than having a consensual extra-marital affair. Right? Right. People saw right through Coulter's attempt to equate child molestation to infidelity. The comparison did not go well for her.

But Coulter's latest shocking statement has provided a weird window into her personal life. You see, on Friday, Senator Marco Rubio refused to support the GOP tax bill until he could secure more money for a child tax credit for middle-class parents. Ann Coulter apparently really didn't like that. Here's her response:

How dare Rubio try to make anyone's life better when Ann Coulter is apparently so miserable? If Ann Coulter can't be happy, then no one should be happy!

For a woman who appears to make a living saying shocking things, this tweet was just a tad too much.

We didn't ask for the mental image of Ann Coulter, surrounded by cats, sobbing, and drinking an entire bottle of wine while watching You've Got Mail, but here we are. The Internet, as always, had the best reactions.

Poor Ann. After all, she may have a net worth of $8.5 million, but she doesn't have kids to fill her days with joy. How dare Marco Rubio try to make parents' lives easier when Ann Coulter is not herself a parent! It's like he wasn't even thinking about Ann Coulter at all when he tried to make a difference in the lives of the middle-class people he represents! More like Marco RUDEbio!

Others are a bit worried about Coulter:

We're not saying Ann Coulter is a literal Grinch. But we are saying that if she turns out to have a dog named Max and termites in her smile, we're not gonna be surprised.

And if we're being honest, it's also kinda hilarious. You can be against a tax cut for the middle class, but sharing sad details about your personal life is no way to effectively communicate your disapproval.

It's 2017 and we're all miserable, Ann! On the bright side, you finally have something in common with the rest of us!

If you, like Ann, are feeling down this holiday season, this Twitter user has some excellent advice:

Do not rail against Senators who are trying to make things better for people. Do not lash out at families who have children. Do something to fill your own life with cheer. Happy holidays. (Even to you, Ann.)