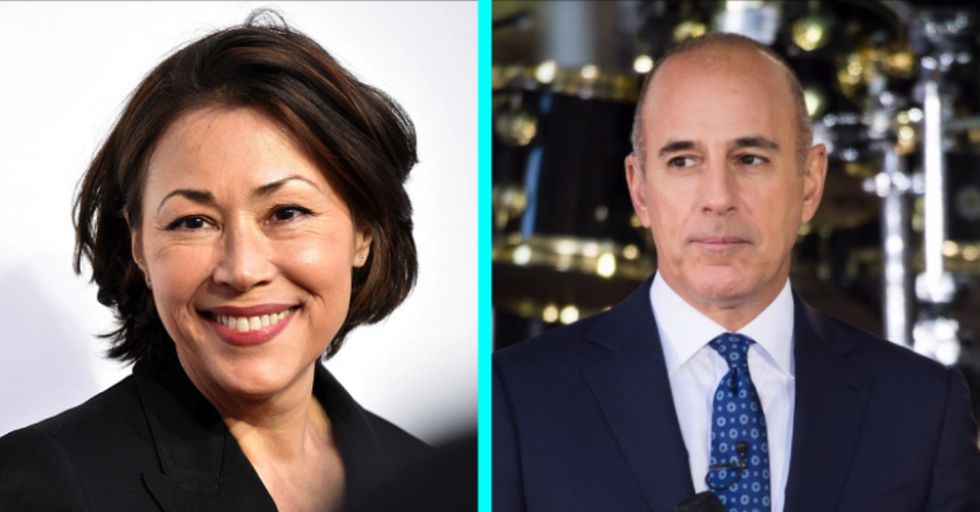 When a shocking scandal comes to light, we naturally tend to look for reactions from the people we think will be most affected by it. When Angelina Jolie and Brad Pitt broke up, who didn't immediately think about Jennifer Aniston? As the film I, Tonya gains critical praise, we couldn't wait to hear Nancy Kerrigan's reaction. And when Matt Lauer was finally fired after years of sexually harassing the women around him, we thought of Ann Curry.

Now, she's come forward with her own statement about Lauer.

Ann Curry has been a reporter for more than 30 years.

She's spent much of her career reporting on human suffering in war zones and natural disasters. Starting in 1990, she began working for NBC.

Curry worked closely with Matt Lauer for several years. She had been a substitute Today news anchor in the '90s and was finally hired on as Lauer's co-host in 2011. But it didn't last.

In June of 2012, Ann Curry was blindsided with the news that she was fired from the Today show. She gave a tearful goodbye on the air with Lauer sitting right next to her.

Eventually, it would come out that Lauer had been largely responsible for Curry's ousting. He called his mission "Operation Bambi" (because actually getting Curry fired from the show would be tantamount to killing the Disney character). Lauer focused his efforts on making Curry's work life miserable. And it worked. Curry later told her friends that the work environment at NBC had become a form of professional torture.

And then, in November of last year, Matt Lauer was fired.

After years of harassing and abusing the people around him, NBC finally saw the light and got rid of the guy who had made his female coworkers' lives miserable.

And naturally, the world speculated on how Ann Curry was feeling about the whole thing.

Since Lauer's firing, Ann Curry has maintained a pretty low profile. But this morning, she finally provided a public interview and discussed her experiences with Lauer...

Curry appeared on a CBS This Morning segment to promote her newest project. At one point during the interview, Norah O'Donnell asked Curry point blank: "Do you believe Matt Lauer abused his power?" Here's Curry's response:

.@AnnCurry says she is “not surprised” about the allegations against former “TODAY” co-host Matt Lauer.… https://t.co/psdGuNyArn
— CBS This Morning (@CBS This Morning)1516192780.0

"I'm trying to do no harm in these conversations," Curry began, "but I can tell you that I am not surprised by the allegations." Gayle King (the other CBS This Morning co-host) continued to press Curry. "What do you mean by that, Ann? What do you mean that you're not surprised? You heard things? You knew things? What does that mean?" At that point, Curry appeared to hesitate. "I know what it's like to be publicly humiliated [...] and I don't want to cause that pain to somebody else." "But I can say that I would be surprised if many women did not understand that there was a climate of verbal harassment that existed. I think it'd be surprising if someone said that they didn't see that."

John Dickerson then asked why she'd tweeted a #MeToo status back in October.

“I don’t know a single woman who has not endured some form of sexual harassment and many women have endured workpla… https://t.co/eQzL5Wq8oA
— CBS This Morning (@CBS This Morning)1516194064.0

In answer, Curry said, "I don't know a single woman who has not endured some form of sexual harassment and many women have endured workplace sexual harassment. It's happened to me in multiple jobs, and it is a way of sidelining women." She then tried to steer the conversation back to the people who really matter in these cases. "We should be talking about the victims. We're talking about the scandal, the scandal, the scandal — what about the victims? What are we going to do to remove the stigma and the shame? What are we going to do to make sure these women work and are not sidelined and prevented from contributing to the greater good that we all are trying to do?"

Gayle King then asked Curry to directly address the rumors that Lauer was behind Curry's ousting from the Today show. "Do you believe that he was behind it?"

"I don't know what was all behind it," Curry answered. "I do know that it hurt like hell. It wasn't a fun moment. I've learned a great deal about myself; I've really at this point let it go. [...] It's been years, and I want to sort of really move on from that." She then — once again — urged everyone to stop focusing on the individual scandals that keep making headlines and instead move forward to create a better environment for everyone.

In short, Curry was a true class act.

The Internet was quick to point out that Curry didn't take any time to rake Lauer over the coals, nor did she deny that she had witnessed his deplorable behavior (which is in pretty stark contrast to the comments Katie Couric made regarding Lauer earlier this week). Instead, Curry tried to drive the conversation toward how we're actually going to change things for the better.

And for that, Curry should be applauded. Lauer may have wasted all that effort on trying to ruin Curry's work life. She's obviously made of much tougher stuff than he realized.