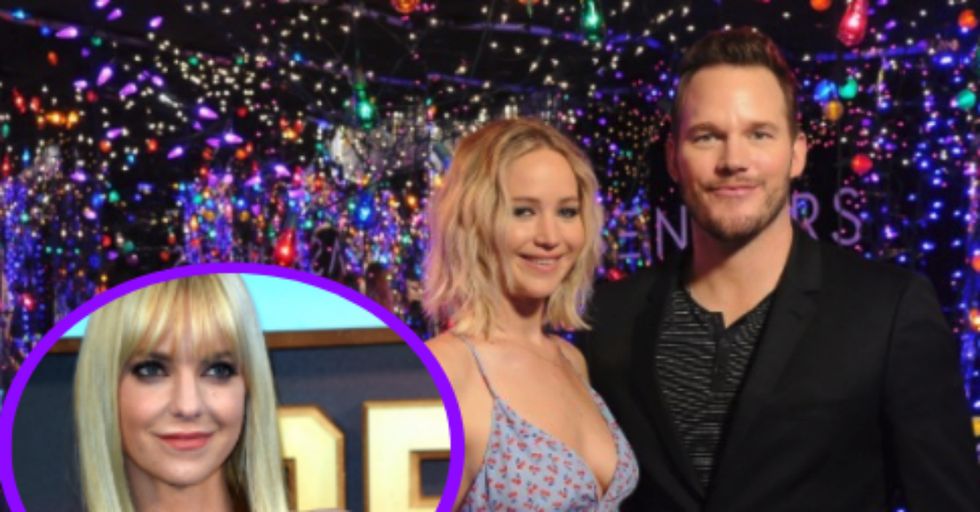 A breakup is difficult to go through in the best of circumstances. Throw in some paparazzi and the unrealistic expectations of thousands of fans, and you've got a recipe for a very, very difficult situation.

Back in August, Chris Pratt and Anna Faris announced they were separating after eight years of marriage. Amid the fallout, many people jumped to conclusions, including that Jennifer Lawrence (Pratt's Passengers co-star) was in some way responsible for the split. Yesterday, Faris released a new book that addresses those rumors and the effect they had on her.

We were all disappointed to learn that Chris Pratt and Anna Faris were breaking up.

For a long time, they were something of a Hollywood dream team. After they announced their separation, people were quick to scream, "Love is dead!" and "Why, God? WHY?!" Many went digging for explanations for the split.

A lot of people jumped to the conclusion that Jennifer Lawrence must have been responsible for Pratt's and Faris' breakup.

Lawrence co-starred in the film Passengers with Pratt. They spent a lot of time together both while shooting and during press junkets, and many people commented on their obvious chemistry, speculating that maybe the two had had an affair.

In Faris' new book, Unqualified (which features a foreword from Chris Pratt), she speaks out about how those rumors affected her.

She said that before Lawrence and Pratt even met in person, her publicist pulled her aside and warned her that there would be rumors surrounding them: "My publicist, out of the blue, pulled me aside and said, 'Anna, listen, there are going to be paparazzi all over them,' she said. 'There are going to be shots of them laughing together on their way to set. There are going to be stories circulating, and you have to brace yourself for this.' I didn't think it would bother me. I've been in this business a while now and I had seen Chris star alongside other beautiful women, like Aubrey Plaza and Bryce Dallas Howard."

"I'd always taken pride in our relationship, and the coverage, even though it was just false rumors, was making me feel insecure," Faris said about the many rumors that started circulating even before she and Pratt had broken up.

Now, though, Faris says that she and Lawrence are cool. She also acknowledges that Lawrence (who has been in a relationship with director Darren Aronofsky for over a year) didn't owe her any explanations. "Jennifer and I really are friendly, and she was apologetic even though she didn't need to be, because she hadn't done anything wrong," Faris writes. "She's awesome, but of course it's hurtful and also embarrassing when people are saying your husband is cheating on you, even if it's patently untrue. You still feel, and look, like a fool."

So there you have it, folks. This is how adults handle issues.

It's pretty refreshing to see a couple that doesn't simply drag each other's names through the mud after a breakup. Sometimes people split up, but it doesn't mean the rest of their lives have to be focused on making each miserable. Pratt and Faris have since attended counseling to make sure that they're doing the best to co-parent their son Jack. Obviously, no one wants a breakup. But if you ever find yourself at the end of a relationship, try to be more like Pratt and Faris.