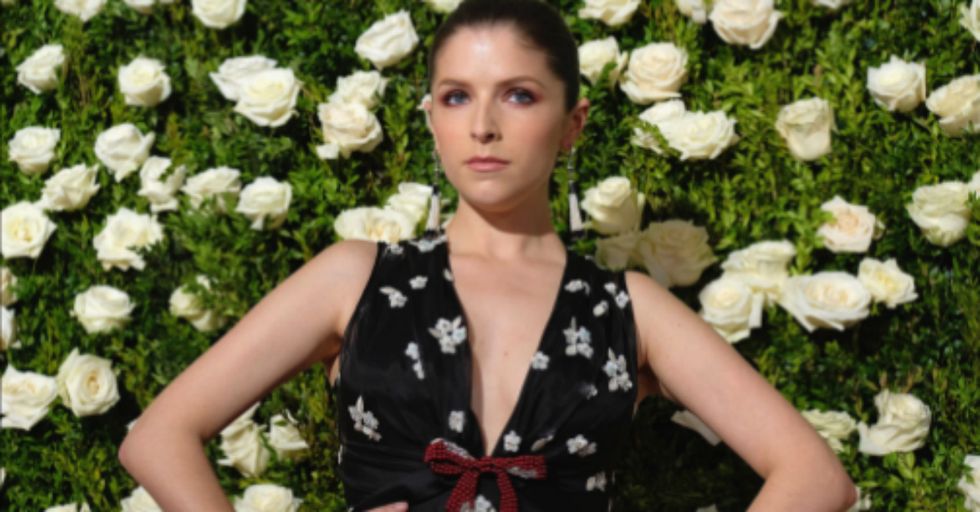 Finding someone to spend your life with can be one of life's most fulfilling endeavors, but for most people, it can be marked by challenges and missteps along the way. Nearly everyone has dated someone who's not quite right for them, and while breakups are often really hard to deal with, they're definitely better than spending your life in a not-ideal union.

Anna Kendrick recently revealed the reason she once broke up with a guy, and it's an important lesson for absolutely everyone to learn.

Anna Kendrick is one of those celebrities who you might not actually know, but you kinda feel like you could be best friends, right?

(Also on the list is Kristen Bell, Chrissy Teigen, and J.K. Rowling.) She seems so down-to-earth and delightfully normal. As normal as one can be while also being a major celebrity, that is.

She also has some pretty legit opinions on truffles.

"Remember when we all pretended to like mushroom shavings that tasted like feet just bc they were expensive?" -eve… https://t.co/y7jEejysGd
— Anna Kendrick (@Anna Kendrick)1513372938.0

(Seriously, world — what are we thinking with this whole truffle thing? We're ready for truffles to be done.)

Recently, Kendrick was interviewed by ELLE.

In the interview, Kendrick gets real about a number of things, including how she really feels about her Pitch Perfect 3 character, Beca. Playing Beca is, in Kendrick's words, "a little bit of wish fulfillment, because she definitely is very savvy and knows herself." While Beca is pretty cool and collected (even in the midst of a capella battles), Kendrick doesn't think she handles conflict very well. "In the shower, all I do is go back and say the things that I wish I had said. I think I'm really terrible with confrontation. I'm either way too meek, or I explode and get really emotional. Then I feel like an idiot, because I should've kept my cool."

Kendrick also shared an anecdote about a guy she was dating.

This guy would often tickle her. In fact, Kendrick actually broke up with the guy because he tickled her.

After all, tickling is something that happens in the majority of relationships. Most people probably don't consider it to be a break-up-with-able offense. But Kendrick did. Here's why:

Kendrick doesn't like being tickled, so she told the guy she was dating to cut it out.

"I said, 'I know that's cute and that people do it, but I really don't like being tickled. It really makes me feel trapped and panicked. I know it's silly and funny for most people, but I really hate it, so could you please not?'"

Kendrick made a perfectly reasonable request, but the guy she was dating didn't respect it. "He thought that it was really dumb that I had a problem with being tickled and did it anyway," Kendrick said.

So she broke up with him. He didn't respect her boundaries or her requests that he stop doing something that bothered her, so she ended the relationship.

At first, Kendrick worried that when the guy talked about their breakup, she'd be labeled as "crazy."

She figured "he would tell his friends, 'Oh, she broke up with me, because I tickled her. What a psycho.' I just had to go, 'No, I broke up with you because I told you something was important to me, and you didn't respect that.'"

"Talking about how you feel about something is important," Kendrick said. "I used to not do that, because I thought, 'Those aren't facts. I can't make an argument based on my feelings.'"

"Then I realized that nobody can tell me how to feel about something. Just because you think I shouldn't be bothered by something doesn't mean that I'm not bothered. If my feelings matter to you, then this is what needs to change. If my feelings don't matter to you, then I obviously need to make a decision about what that means about moving forward in any kind of professional relationship."

Kendrick absolutely made the right call in this situation.

We applaud her for standing up for herself and getting out of an uncomfortable and unfair relationship. Here's a lesson we'd all do well to remember: You can break up with someone for any reason, or for no reason at all. You get to make the calls when it comes to your life. Even when it comes to something that many may see as a small non-issue like tickling.