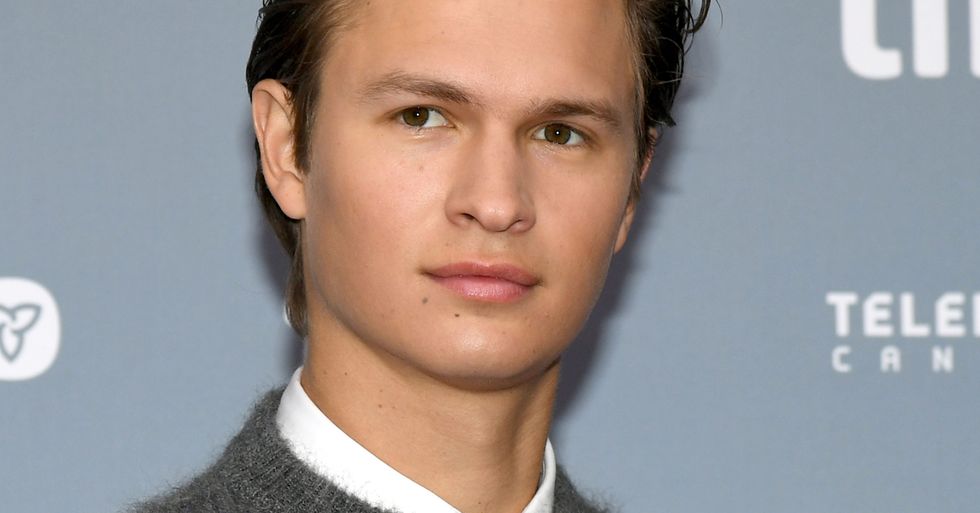 Ansel Elgort stripped completely bare on Instagram to trick fans into raising money for local hospitals and restaurants, and it certainly isn't one to be missed...

Ansel Elgort... where do we even start?

His naked photo has sent the internet wild, but firstly, let's go back a few years...

The twenty-six-year-old has made a pretty successful career as an actor for himself...

And he is now globally recognized for a whole range of things.

Ansel was born in New York City to parents who worked in the fashion and theatre industries.

It was obviously meant to be!

And he started taking acting classes at the age of twelve.

Just days after his eighteenth birthday, he premiered a lead role in an Off-Broadway production of Regrets in March 2012.

He then became very recognized for his role in the 2013 remake of Carrie...

Starring as Chloë Grace Moretz's prom date, Ansel's role in this movie well and truly spread the word in Hollywood.

He played the role of Caleb Prior, the brother of the lead character in Divergent.

But it wasn't until the following year when the entire world would fall in love with the young actor...

Ansel's leading role in The Fault In Our Stars was highly praised and it's easy to say that he became the new teenage heartthrob for millions of young women around the world.

His regime is now very full...

So yeah, he's made a pretty amazing career for himself so far!

Since 2012, Ansel has been dating his high school sweetheart...

Ballerina, Violetta Komyshan has been in Ansel's life for a very long time, and even though the couple temporarily broke up in 2014, they reconciled in 2015 and they are stronger than ever.

They are literally the cutest couple...

Much to the disappointment for Ansel's heartbroken fans!

Right now, like many of us, Ansel is self-isolating with Violetta...

Because the global pandemic most certainly doesn't exclude the rich and famous!

Ansel recently caught the attention of the entire world recently...

He shared a very naked Instagram post, which has since been removed, with the caption simply stating, "ONLYFANS, link in bio."

But when fans eagerly clicked on the link...

They were instead relocated to a GoFundMe page trying to raise money for Brooklyn for Life! restaurants here in the U.S. Brooklyn for Life! is an organization aiming to deliver seventy-five-100 meals a day to the New York borough's frontline workers during the global pandemic.

This was a very clever tactic on Ansel's part...

The GoFundMe page read: "Small businesses, particularly locally-owned restaurants, are facing financial pressures as Brooklyn self-isolates to slow the spread of [the virus]. They’ve had to lay off workers, their revenues have dropped, or they've shuttered their doors completely. But many are still rolling by converting their operations to full-time takeout & delivery service. We will work to help address both of these challenges, fueled by your tax-deductible donation."

Ansel is eager to keep his community thriving...

"Our goal is to fund each Brooklyn for Life! restaurant, enabling them to provide - at no cost to the recipients - at least seventy-five-100 meals per day for delivery to the Brooklyn frontlines of this pandemic. And with Greene Bites, a bodega directly across the street from Brooklyn Hospital at 116 Dekalb Ave, we're providing a $500 per day allowance, so that anyone walking in with a Brooklyn Hospital ID gets food & drink on the house. In doing this, we’ll keep Brooklyn's grills & ovens hot to feed our community healthcare warriors and keep some of our vital local small businesses and members of their staff afloat in tough times."

With the caption: "Sex sells better than sunsets, plz donate at link in bio."

Even though the original thirsty post was taken down...

Fans were quick to get their screenshots (and their opinions) in.

And thanks to the power of the screenshot, many fans can now live happily in peace.

The hype is very much real...

me opening instagram at 1 in the afternoon and immediately seeing ansel elgort naked https://t.co/KdGrr2fSjj
— 𝕛𝕒𝕔𝕜 (@𝕛𝕒𝕔𝕜)1587526529.0

Are you ready to have a glimpse?

Here is Ansel, in all of his glory.