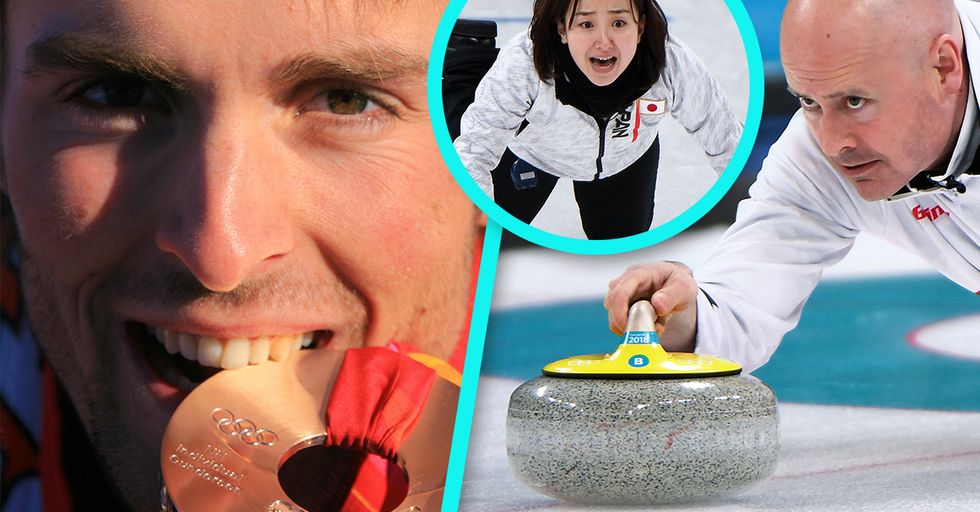 Answers to 12 Questions Everyone Has About the Winter Olympics

Why do Olympians bite their medals?

How do you win points in curling?

What's the difference between ice dancing and figure skating?

Well, I'm glad you asked. Read on for the answers!

1. Do the rings on the Olympic flag mean anything?

They sure do! The Olympic ring symbol was developed in 1912 by Baron Pierre de Coubertin. According to him, the colors of the rings (together with the white background) include the colors found in the flags of every competing nation.
While we're talking Olympic symbols, did you know the official motto of the Olympics is "Citius, Altius, Fortius"? That's Latin for "Faster, Higher Stronger," and is also preetttyyy close to being a new Daft Punk song.

2. Where does the fire from the Olympic Flame come from?

The Olympic Flame is yet another symbol found at the games. People sure do love their symbolism, huh? It commemorates the Greek myth of Prometheus stealing fire from Zeus and has been part of the Olympic Games since 1928. You're probably already familiar with the tradition of having people relay the torch throughout the host country, but how does the very first torch get lit?
Interestingly enough, it's not just from any ol' campfire. Several months before the opening ceremony, eleven women representing the Vesta Virgins meet at the Temple of Hera in Greece. There, the torch is lit by the Sun's rays with the use of a parabolic mirror. Pretty badass, right?

3. Why do Olympians bite their medals?

Because they taste good! Nah, just kidding. Actually, the main reason is that photographers ask them to bite their medals because it looks good in pictures and is more interesting than simply having the athletes stand there smiling. Back in 2010, German luger David Moeller actually chipped his tooth biting down his silver medal! And while we're talking about medals...

4. How much are the medals worth?

Maybe not quite as much as you'd think. For starters, the gold medals are not made of solid gold — they're mostly comprised of silver and copper. For the Pyeongchang Games, only about 6 grams of the 586-gram medal is pure gold. The melt value of a gold medal, therefore, would be about $577. Silver medals (which are solid silver) are made with about $320 worth of silver. Bronze medals are made of a copper alloy and are only worth about $3.50.
But! Olympians who win a medal are also awarded a cash prize. $37,500 for each gold medal, $22,500 for silver medals, and $15,000 for bronze.

5. What's the other thing the athletes are holding?

In Pyeongchang, medalists receive small wooden sculptures of the city's mountains as well as a stuffed tiger styled after Soohorang, the white tiger mascot of this year's Olympic games. The Rio Olympics were the first to give a small sculpture rather than the more traditional gift of a bouquet to medalists. Pyeongchang is continuing the tradition.

6. How does the scoring work in curling?

This has to be the No. 1 question about the Winter Olympics. Basically, you want your team's curling stones to be closer to the bullseye (or "button") than the other team's. Scoring only happens at the end of a round (called an "end"), after both teams have thrown all eight of their stones.
If all eight of your stones are closer than your opponent's, you get the top score of eight points (called a "snowman") for that end. There are 10 ends total. This part is important: Only one team can score points in each end. You get one point for each stone that is closer to the button than your opponent's. So even if your opponent has eight stones near the button and you have seven nowhere near it, if you land your last stone right on the button, you win the end. You get one point for each stone that's closer than all your opponent's stones. Can we talk about ice dancing v. figure skating next?

7. What's the difference between ice dancing and pairs figure skating?

They both take place on the ice to music, so what's the difference? In short, pairs figure skating is known for its throws, lifts, and jumps, whereas ice dancers are judged more on their footwork and how well they match their movements to one another. In ice dancing, there can be no overhead lifts. Additionally, the dancers are not supposed to separate more than two arm-lengths throughout their routine.
Overall, ice dancing is more like ballroom dancing on ice (hence the name "dancing"). More emphasis is placed on rhythm and musical interpretation.

It's a figure skating jump! And it's named after a Swedish skater named Ulrich Salchow, who invented the jump in 1909.
Takeoff for the jump happens from the back, inside edge of one foot. From there, skaters can make one or more rotations (making it a single, double, or triple Salchow). Skaters then land on the back, outside edge of their other foot.

Very carefully. More specifically, they use their calf muscles to flex the sled's runners — right calf to turn left, left calf to turn right. They also roll their shoulders to apply pressure at the top of the sled.

10. Why is the skeleton called a skeleton?

Interestingly enough, the skeleton does actually get its name from actual skeletons. It's named for the bony appearance of the sled (as compared to the more rounded luge). However, some people argue that the name actually comes from an incorrectly anglicized version of "Kjaelke" (the Norwegian word for toboggan).

11. Where did the biathlon come from?

Skiing and shooting rifles — who thought to put those two together? According to Encyclopedia Britannica, the biathlon is rooted in Scandinavian traditions of revering the Norse god Ullr who, conveniently enough, is the god of skiing and the god of hunting.
There was also a Norwegian exercise that was meant as an alternative to military training in the 18th century, which involved shooting while skiing, downhill racing through trees, downhill racing down large hills, and racing on flat ground while carrying a rifle and military pack.

12. How do they choose who carries the flag?

In the U.S., flag bearers are chosen by a vote by each sport's team captains. Usually, this isn't much of a problem, but there was a bit of controversy surrounding the flag bearer selection this year.
There was a tie — something the U.S. Olympic Committee hadn't ever planned on happening. The vote came down to Erin Hamlin (a luger) and Shani Davis (a speed skater). To settle the tie, the Olympic Committee opted to flip a coin, which didn't sit well with Davis. (Hopefully they have a better tiebreaker plan in place for the next Games!)