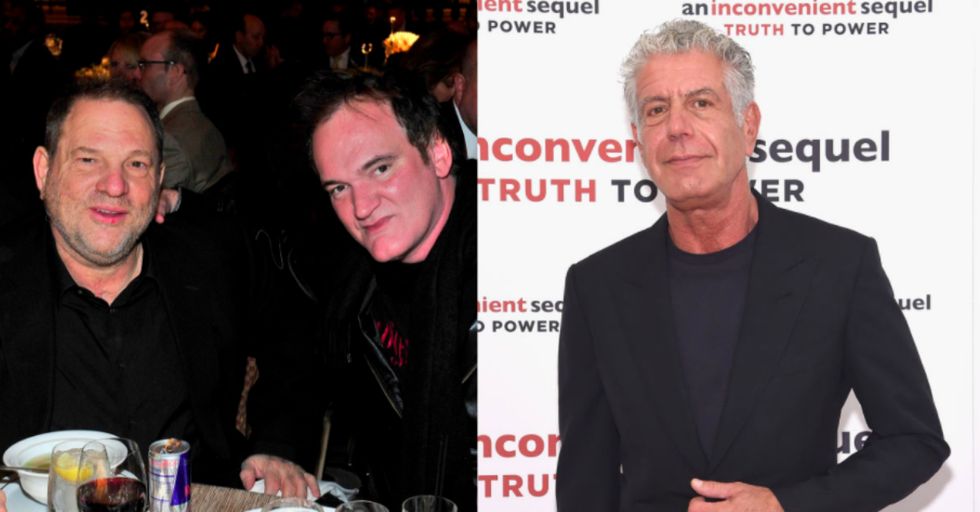 Superstar chef and producer Anthony Bourdain has been very introspective about sexual assault and misogyny lately. He is currently in a relationship with Asia Argentino, one of Harvey Weinstein's accusers, and the whole situation, he confessed in an interview with Slate, has thrown him for a loop and made him examine how his own reputation as a bad boy kept him from being aware of the sexual toxicity in his own industry.

Bourdain recently spoke at the Produced By conference in New York and he offered some more thoughts on the Weinstein scandal via an analogy about a lucrative deal he and his producing partner turned down.

Bourdain said that he and his partner had initially considered the unnamed deal, but that would have meant working with someone both did not like.

While he did not initially say that this statement was in reference to Quentin Tarantino's complicity with Harvey Weinstein's assaults, the implication was clear. He felt Tarantino was complicit in Weinstein's sexual assaults.

It's no secret Quentin Tarantino is one of Weinstein's most frequent collaborators.  Most of his films, including Reservoir Dogs, Pulp Fiction, the Kill Bill franchise, Inglourious Basterds and The Hateful Eight, have been made by either the Weinstein Company, or Miramax, which Weinstein used to run.

What's more, Tarantino himself has admitted to knowing more about Weinstein's behavior around women than he'd let on.

As Tarantino said to the New York Times:

There was more to it than just the normal rumors, the normal gossip. It wasn’t secondhand. I knew he did a couple of these things. I wish I had taken responsibility for what I heard. If I had done the work I should have done then, I would have had to not work with him.

But he didn't want to because that would hurt his bottom line – so he just ignored the women who complained.

In fact, one of them was his former girlfriend, actress Mira Sorvino, who had confessed to him that Weinstein had attempted to assault her.

But did Tarantino help or believe her? No. Instead he "hoped" her status as his girlfriend would keep her sacred and therefore safe from Weinstein's clutches.

What I did was marginalize the incidents... I thought Harvey was hung up on her [Mira Sorvino] in this Svengali kind of way. Because he was infatuated with her, he horribly crossed the line.

Crossed the line. That's what they're calling it now.

Tarantino also knew of other actresses who were harassed or assaulted by Weinstein, one of whom was Daryl Hannah, with whom he worked on his Kill Bill franchise.

In an interview with the New Yorker, Hannah describes her encounter with Weinstein during as Kill Bill 2 premiere in Rome. The director went to her hotel room and instructed her to go downstairs for a party. When she arrived, there was no party – only Weinstein, who asked if her breasts were real and whether he could touch them. Unfortunately, that wasn't the end of it...

After Hannah declined, and tried to tell the powers that be, the blowback was swift.

As Hannah told the The New Yorker's Ronan Farrow, “I experienced instant repercussions." The next morning, the Miramax private plane left without Hannah on it. Her flights for a trip to Cannes for the film’s French première were canceled, as were her hotel room in Cannes and her hair-and-makeup artist for the festival. “I called everybody," she recalled, including her manager, a producer on the film, and its director, Quentin Tarantino.... “I called all the powers that be and told them what had happened," Hannah said. “And that I thought that was the repercussion, you know, the backlash from my experience."

So Anthony Bourdain wasn't wrong when he called Tarantino complicit.

When Variety later asked him whether he was referring to Tarantino with his comments, Bourdain answered, "One might think." His girlfriend Asia Argentino didn't beat around the bush, however. She tweeted a link of the Variety article with the caption: "One might think we all need to slam Tarantino's complicity with Harvey Weinstein." Exactly.