It all started in typical 'pro-lifer' style. | 22 Words 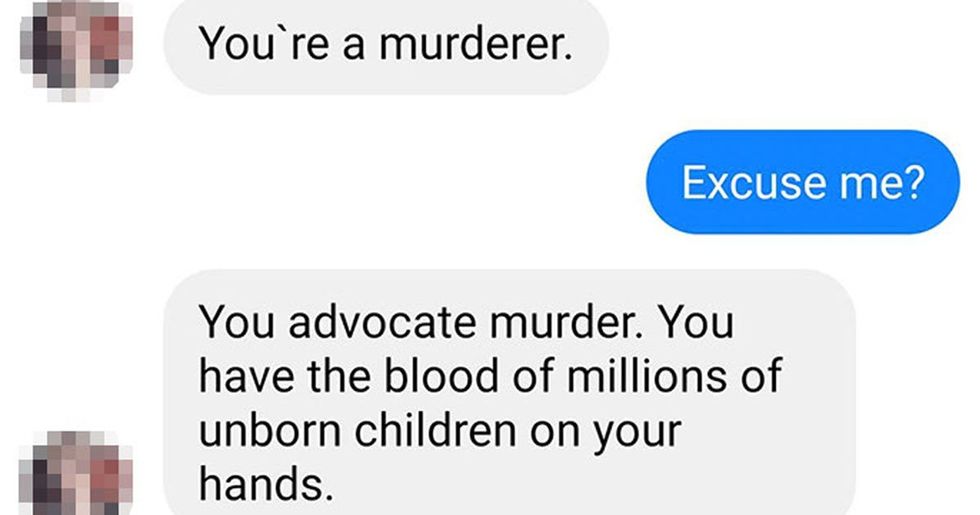 Anti-Abortionist Gets Completely Shut Down In Brutal Text

Abortion is an incredibly divisive topic.

The ideology that all anti-abortion activists share is that “life begins at conception,” which implies that an unborn fetus, embryo, or even zygote carries with it the same humanity and right to life that any living, walking human does. Okay.

And, rather than respecting the opinions of those who believe in having the choice to abort an unwanted pregnancy, anti-abortionists like to preach this quite barbaric belief upon the rest of the world.

So it's always nice to see when one of these anti-abortionists gets spectacularly shut down. In a series of text messages that went viral over Facebook, two vastly different methods of stating one’s position on abortion were demonstrated... and it isn't difficult to see which one was the most effective.

Women have long fought for the right over their own bodies.

Abortion has always been a somewhat "taboo" topic, with women historically being forced to risk their lives in order to terminate their unwanted pregnancies.

A 1973 U.S. Supreme Court case,  Roe v. Wade, affirmed that a woman's access to safe and legal abortion is a constitutional human right.

Though the abortion law is more at risk than ever before.

The right to safe and legal abortion has been the law of the land for more than 45 years, and is a part of the fabric of this country. Brett Kavanaugh's confirmation to the Supreme Court dealt a huge blow to our right to access safe, legal abortion, however. Kavanaugh was nominated by President Trump, who had previously made a clear promise to nominate judges who would "automatically" overturn Roe v. Wade.

And there are still people who don't think women deserve the right to a safe abortion.

These people, or anti-abortionists, as they are commonly referred to as, claim that they believe in "pro-life" and that terminating a pregnancy is up in the same ranks as "murder."

They aren't known for their subtlety.

With the phrases "murderer" and "baby killer" often thrown about, it can be difficult to take these people too seriously.

They've made some pretty outlandish claims.

From calling pro-abortionists "terrorists" (Yes, Bill Zedler, I'm looking at you), to comparing abortion to the Holocaust, to tirelessly referencing Christianity and "God's way" to justify keeping an unwanted pregnancy, pro-lifers will say pretty much anything to rationalize their deluded views on the topic.

They are known for their quite dramatic views.

We all remember the time U.S. senate candidate Todd Akin notoriously blamed rape victims for their unwanted pregnancies, saying, “If it’s a legitimate rape, the female body has ways to try to shut that whole thing down."

And they have been known to have difficulty with answering logical questions.

Science fiction author and journalist Patrick S. Tomlinson went viral after he challenged one of the central notions used by ‘pro-lifers’ that life begins at conception and that therefore, a human embryo holds the same value as a human child.

Pro-lifers have struggled to answer his question.

Tomlinson says that a decade ago he came up with the scenario which shuts down the idea and that in all that time he’s never had an honest answer from any pro-lifer. The scenario depicts a situation in which you are in a fertility clinic when the fire alarm goes off. Before you escape, you have the option to save either a five-year-old child who is pleading for help, or a container of 1000 viable human embryos.

Apparently not. Tomlinson perfectly highlighted the ridiculousness of the pro-life ideology, and demonstrated how many anti-abortionists are actually more concerned over what a woman can do with her body, rather than saving the life of embryos.

And now, another legendary person's response to an anti-abortionist has gone viral.

They're always good fun to read, aren't they? The woman, who goes by "Insufferably Intolerant Science Nerd" on Facebook, gave a reasoned and thorough response to an unsolicited, and quite frankly, abusive accusation.

The unnamed anti-abortionist was completely shut down.

The Facebook user, whose full name is unknown, has become every woman's hero after she perfectly put into words what many people feel about so-called "pro-lifers." Though she did say that she would rather "wax her genitals with a blindfold on than engage in a debate with the so-called 'pro-life' brigade." Perfect.

It all started in typical 'pro-lifer' style.

Ah, the classic "you're a murder!" quip. Can they not think of anything more imaginative, really?

However, our hero remained calm.

While most of us would probably lose our tempers at this point, this woman remained composed, and responded with the most perfect come back.

She highlighted the real issue of unwanted pregnancies.

Because what happens after you've given birth to a child you neither want nor can afford? Abortion is often the only answer for some women, who terminate their pregnancy for other reasons than so-called "murder".

But, of course, this person came back with the default "pro-life" argument.

"That's the parents' responsibility". The woman sent her final argument, telling this person, "Don't pretend you give a sh*t about children when you aren’t prepared to do a damn thing about the millions of struggling families on welfare, or the millions of children in foster care".

People have praised her for her articulate response.

Many Facebook users commented on her post, noting how well she had communicated the thoughts and beliefs of all pro-choicers far and wide.

Her argument highlights an important point...

That, sometimes, abortion simply needs to happen, and people need to get over it and move on.

And, of course, some pro-lifers still tried to argue their point in the comments.

And she again shut them down spectacularly, by sarcastically informing the pro-lifer that birth control, remarkably, isn't 100 percent effective, and not everyone has access to contraception.

This woman's argument follows one of our country's most shameful moments...

In May this year, the world was shocked when Alabama announced a complete ban on abortion. Under this notorious bill, doctors face 10 years in prison for attempting to terminate a pregnancy and ninety-nine years for carrying out the procedure. And many celebrities have been extremely vocal in their thoughts on the passing of this archaic law...