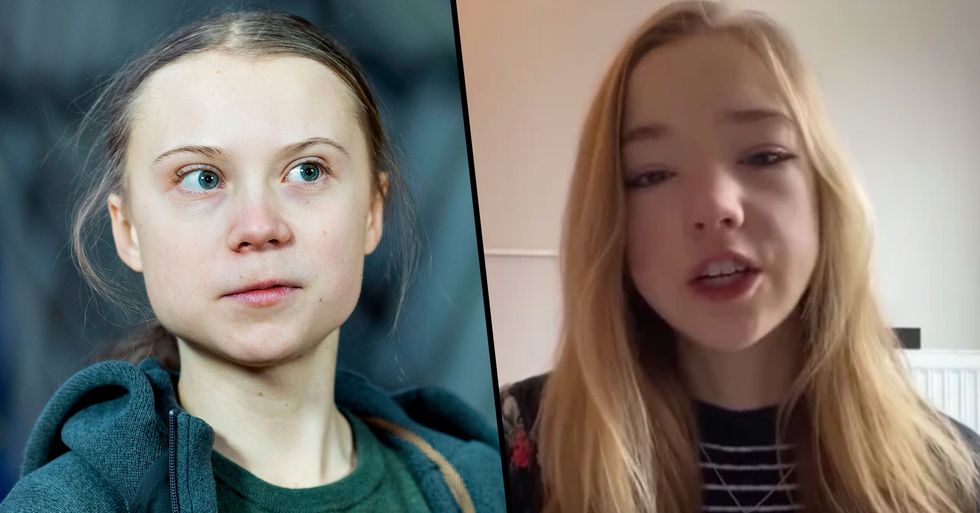 Watch out, Greta Thunberg, there's a new teenage activist on the block.

Naomi Seibt, or the "anti-Greta Thunberg" as she has become best known as, is the latest protester to make headlines, but for slightly different reasons to her Swedish counterpart...

Greta Thunberg has become the face of the climate change movement.

However, despite her millions of followers and supporters...

There are a handful of people who aren't too convinced by her message, including another teenage activist who spreads a different message entirely.

Following Thunberg's viral success, Seibt has been inspired to fight for what she believes in...

Which is that climate change is not real.

An expression that is used by global warming skeptics to describe scientists and commentators who stress the catastrophic effects of global warming and climate change.

And she wants to spread her message to the world, just as Thunberg has done with hers.

"I have good news for you. The world is not ending because of climate change," Seibt declared in a YouTube video for the right-wing publication, Heartland Institute. "People are being force-fed a very dystopian agenda of climate alarmism that tells us that we as humans are destroying the planet and that we, the young people especially, have no future."

She believes that there is a "lot of fear-mongering going on"...

And claims that she has done her own research into the matter. "I do not believe that the climate is changing because of manmade CO2 emissions. And if it was, I don't believe that would have such a detrimental effect," Seibt told Insider.

And now, she has come after Thunberg.

Seibt recently targeted the Swedish activist for "not knowing any more than a random teenager" after she was included on a panel of "experts" to discuss the world's handling of the coronavirus pandemic back in May.

Seibt slammed CNN for allowing Thunberg a platform to spout her "propaganda."

On the broadcaster's decision, she said in an interview with the Express: "I was actually shocked that she was invited on that panel as an expert. I think she was even called an expert on that panel."

“Greta doesn’t know any more than any random teenage girl who reads the mainstream news."

Seibt then continued: “So she just spills the propaganda that she is so supposed to talk about."

Greta has since responded to Seibt's backlash...

By writing on Twitter: "I am not an expert. I am an activist. The only people claiming that I’m an “expert" are those who are trying to ridicule me. My message has always been to unite behind science and listen to the experts."

Seibt is yet to respond to Thunberg's scathing reply.

For more on the current fight against climate change, keep scrolling to read about who claims that cannibalism is the only answer...