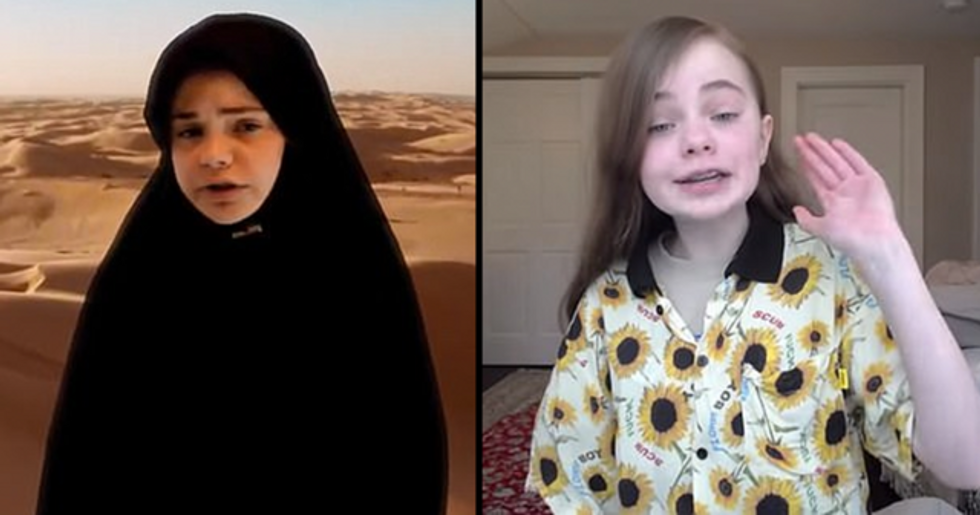 Let us introduce you to the teenage YouTube-comedian known as Soph.

The viral star has long been an online agitator, criticizing politically correct culture and mocking those who are afraid to offend. For a while, she was flying pretty much under the radar, with a relatively small subset of loyal fans. But that was until this week.

A Buzzfeed news story drew attention to this controversial content creator in a post decrying her (admittedly problematic) views. In fact, as a direct result of the piece, some of Soph's content has been removed from the platform. But many think that the young vlogger is actually highly misunderstood. It seems that the internet doesn't quite know what to make of the complex tale.

When it comes to online content, there tends to be one quick way to get attention.

Being as shocking as possible is one way that content creators can ensure that their stuff gets as many shares and comments as possible - for good or for ill.

Many shock-content creators have one thing in common.

They attempt to join together to take down one common enemy - the elusive beat of "political correctness."

It's a real form of evil in some people's minds.

There are people out there who find political correctness to be a huge problem for society, believing that it stops people from being able to say what they want to.

In fact, some see their stance as a mark of pride.

Avoiding what some term "PC culture" is thought by a certain subsection of the internet to be an inherently noble pursuit.

Although there is a counter-argument.

Constantly saying exactly what's on your mind may not be the smartest plan - and there tends to be fairly good reasons in place for the majority of society's "rules."

But causing controversy has a couple of big benefits.

For one thing, it can help people feel freer to express themselves and their views. And for another, it tends to be a great way to achieve some internet fame.

But this isn't without its problems.

Because, to be controversial, often, you have to include some element of cruelty in your humor.

And, often, this comes in the form of some element of discrimination.

Political correctness often stands in place to protect those who are most in need - and therefore wilfully ignoring it can do damage to these people.

This can cause hurt.

"Punching down" - attacking those who are already at a disadvantage in society - is always problematic.

Which is never a good look.

Sure, expressing your views is important - but is it as important as protecting the feelings of real-life human beings? Well, that's the question at the crux of this story.

It all centers around one unlikely player.

This is a 14-year-old content creator known as Soph - and this week, she's been at the heart of a huge story.

She's also active on other forms of social media.

And it seems that her modus operandi is to incite a reaction from the internet - whether that is a good or a bad one.

And she certainly did that.

Earlier this week, Buzzfeed published a story on the controversial content creator - which quickly got a lot of attention.

It seems that everyone has an opinion.

And one of the best (and worst) things about the internet is that it gives everyone equal opportunity to share their thoughts.

Because this story is a little more complicated than it first appears.

Damn. This little girl just kicked the ass of all the previous e-celeb commentators combined. I was mesmerized. https://t.co/niTIIATdTC
— RAMZPAUL (@RAMZPAUL)1556764257.0

On the surface, it seems as though there's a very clear right and wrong - but the more we explore the topic, the more confusing it all becomes.

Some are huge fans of Soph.

Many think that what she's saying is truthful, smart, incisive, and witty - and she's earned many fans for her content.

Some think that her commentary is what the world needs right now.

Her total lack of fear over what she says is, in some respects, admirable - even though she does seem to express views that most would find unacceptable.

Nonetheless, the Buzzfeed story has had a clear impact.

Almost immediately after the piece was published, one of Soph's videos (in which she made explicit threats to the CEO of the platform) was removed.

This kind of language wasn't new to Soph.

After some time, there were more removals.

The video that originally sparked the outrage, in which Soph wears a hijab and openly criticizes Islam, was also taken down.

There has since been a further development.

It looks as though Soph's account has been suspended for a period, and she is currently unable to upload any more content.

The Buzzfeed story has come under fire, too.

Many think that the journalist totally missed the point of Soph's videos, which weren't designed to harm, but to bitingly satirize.

Soph's age was also brought up.

Many thought that the piece written about Soph was unfair and needlessly drew negative attention to a young person online.

Some had this issue.

BuzzFeed is trying to get this 14-year-old girl banned from YouTube because her humor hurts their feelings.… https://t.co/K2XmBNkPYy
— Mark Dice (@Mark Dice)1557796615.0

Many Twitter-users defended Soph, claiming that the fact that she hurts people's feelings is not reason enough for her to be denied a voice.

And others pointed this out.

Buzzfeed has published pieces about young people with more extreme lifestyles before - but with quite a different tone.

However, the writer isn't willing to back down.

He shared some of the abuse he'd received from fans of the controversial teen on Twitter.

He also brought this up.

While many claim that Soph's comments are satirical and misunderstood, he shared some comments that are hard not to view as abusive.

However, Soph has had this response.

It seems that, in terms of spreading her message, the Buzzfeed piece may well have helped her far more than it had hindered her.

And she's certainly not reigning anything in.

In fact, she appears to be doubling down on the controversial content, sharing this bingo sheet on her Twitter.

And as her YouTube account is paused, it appears that Soph is looking for other ways of getting her word out there...

Now that you know the backstory, check out a video from Soph herself:

What do you think? Is she a puppet for her parents' extremist views, or just voicing an uninformed 14-year-old's opinion?