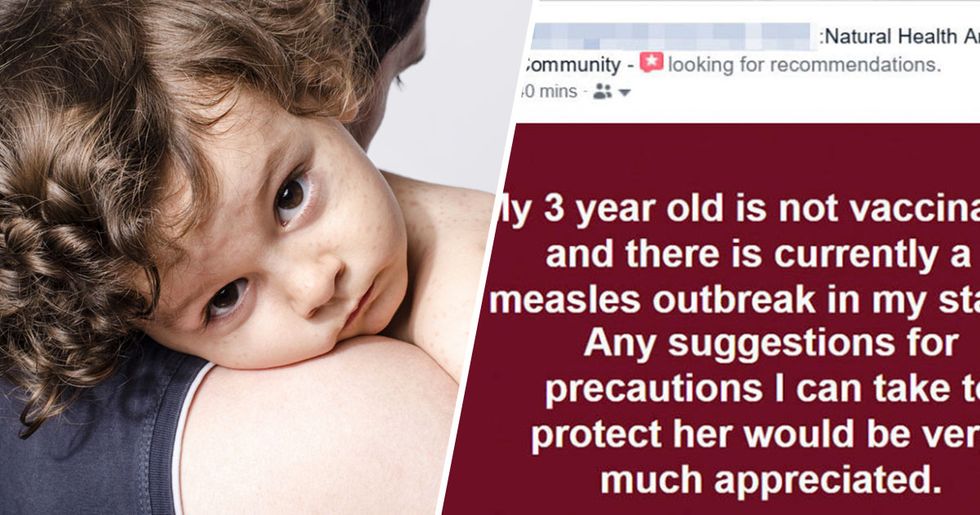 There are many unexplained things in this world. Are UFOs real? Is Avril Lavigne really a clone? What really happened to Tupac?

Yet, despite all of these questions, there remains one mystery that is bigger than them all... anti-vaxxers.

Yes, there's actually a handful of parents out there who don't believe in vaccinating their children. You know, those life-saving vaccinations that prevent a child from getting potentially-deadly diseases? These quite ridiculous people genuinely believe that vaccinations do more harm than good, subsequently baffling and infuriating the rest of the modern world.

Anti-vax moms have become somewhat of a joke, and one has recently gone viral for shooting herself in the foot by publicly asking how to protect her un-vaccinated child from a measles outbreak. The unidentified woman took to Facebook for advice but was met with a flurry of hilarious, yet pretty accurate, jokes and jibes.

Keep scrolling to see the comments, which brilliantly put this woman in her place.

There's no argument about it. Because of advances in medical science, a child can be protected against more diseases than ever before.

Vaccines have eliminated many deadly diseases.

Some diseases that once injured or killed thousands of children have been eliminated completely and others are close to extinction– primarily due to safe and effective vaccines.

Yet there are some people who don't trust these vaccines...

Many parents ask "are vaccines bad?" and get caught up in online articles that argue that you shouldn't vaccinate your child.

Many believe that vaccines cause the problems, rather than prevent them.

It all comes as part of the “anti-vaxxer" movement. Anti-vaxxers believe that there is a connection between vaccinations and autism, as well as other disorders, despite there being no scientific evidence supporting that theory.

There are more anti-vaxxers than ever before.

And, as a result, the measles virus has made its not-so-glorious comeback. Measles was declared to be eliminated back in 2000, but, last year, a staggering number of cases of the virus were confirmed in the United States. Measles starts with cold-like symptoms that develop about 10 days after becoming infected. This is followed a few days later by the measles rash.

The return of the virus was been blamed on unvaccinated children...

As the vast majority of people infected had not received vaccination and were living in close-knit communities wherein the immunization rate is lower than average. Way to go, anti-vax folk.

And, because of this issue, the measles virus is back in full swing.

From January 1 to August 15, 2019, 1,203 individual cases of measles had been confirmed in thirty different states. This is the greatest number of cases reported in the U.S. since 1992 and since measles was declared eliminated.

So, of course, people found it very amusing when an anti-vax mom shared her concerns on the matter...

Yes, this is real life. The worried mom turned to Facebook to seek medical advice for her unvaccinated child.

Rather than consulting a doctor, she turned to social media for advice.

Not the wisest move in the book, is it? Her post in the group, "Vaccine Education Network: Natural Health Anti-Vaxxers Community," informed people that there is a measles outbreak in her state... but that her 3-year-old isn't vaccinated. She wrote: "My 3-year-old is not vaccinated and there is currently a measles outbreak in my state. Any suggestions for precautions I can take to protect her would be very much appreciated."

She asked people for advice on how to protect her daughter from the virus.

And Facebook delivered... spectacularly, might I add. People were quick to offer their quite sarcastic comments on how this situation could be improved, like actually vaccinating her, for example.

Some made some pretty dark jokes...

Though they had a point, 3-years-old is a good age for an unvaccinated child to reach.

Some laughed at her for turning to Facebook in the first place.

Because these Facebook groups are simply rammed with qualified doctors, aren't they?

One Facebook user brought up the misconception of the link between vaccines and autism.

Though there is no proven link between autism and vaccines, this user pointed out that anti-vax moms would clearly rather have their child suffer from incurable diseases than take the minuscule risk of autism.

One woman pointed out the anti-vaxxers' skew-whiff priorities.

And pointed out that her own child is autistic, but is in a healthier position than this woman's unvaccinated child.

A quite dramatic comparison...

But an accurate one, all the same.

So dark, yet so funny at the same.

Because, in the face of crisis and disaster, our President's preferred resolution is to send prayers and thoughts. Super helpful.

And a bit more of old-fashioned sarcasm...

Because you just can't beat it, can you?

And one woman shared her own personal experiences with the matter.

And she passionately explained that she had had a dangerous injury due to unvaccinated children and that this woman is jeopardizing hundreds of children's lives, not just her own child's.

Vaccinate your kids. Simple. And, if you insist on not doing so, don't go asking for advice on Facebook. As you can see, it doesn't end well. For a similar story - about a leading anti-vax politician who came down with chickenpox - keep scrolling!