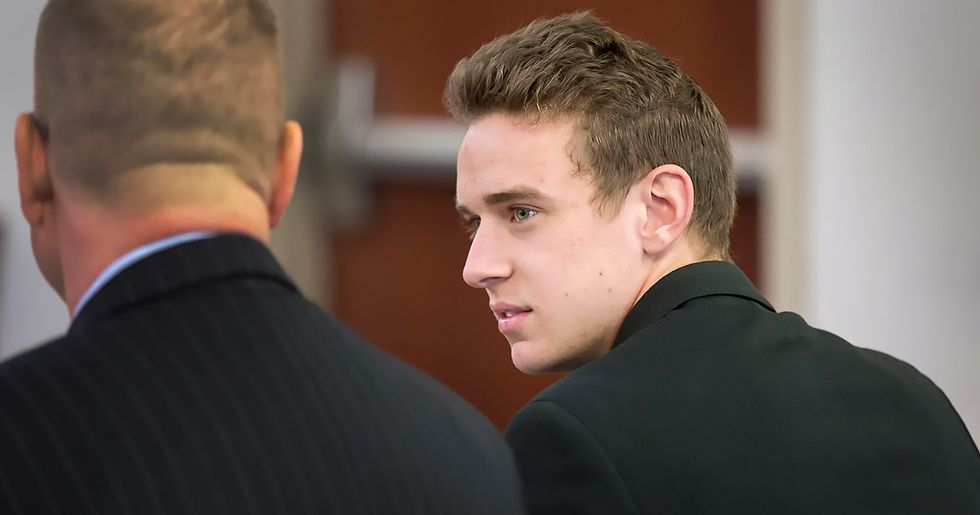 And yet, plenty of people have moral objections to vaccines of any sort, and there's one specific detail about the creation of the chickenpox vaccine has a lot of deeply religious families opting out and putting others at risk.

This is the story of one of those families, the Kunkels, whose son Jerome is in the middle of suing his school for banning him during an outbreak of chickenpox because he refused to get the vaccine. What happened next... may surprise you.

Or maybe it won't. He got chickenpox. But the way he and his family (and legal team) responded may, in fact, surprise you.

Not to get all Jerry Seinfeld here, but what is the deal with anti-vaxxers?

Vaccines just stop illnesses. No one wants to get illnesses, right? So everyone should be vaccinated. It is truly out-of-control bonkers that this is an issue we have to talk about.

I mean, I get that it can be scary to put a substance you don't fully understand into your child's body.

Listen, I'm not a scientist. I don't know what's in a vaccine. And that can be scary. In no way am I suggesting that that feeling is invalid. But it's much more fear than it is anxiety.

So you've just gotta get that vaccination done.

Especially when not getting your kid vaccinated gets them booted out of school.

To paraphrase a (the?) Jeff Foxworthy joke — if you got a school-aged kid who is not allowed to go to school, you might... *the entire audience cheers along* be a bad parent.

That's what happened to Jerome Kunkel.

A high school senior at Our Lady of the Sacred Heart Assumption Academy in northern Kentucky, Jerome Kunkel was recently banned from school by the state of Kentucky's health department because they'd decided to forgo the chickenpox vaccine.

And apparently that's pretty common in northern Kentucky, because the school had a G-D chickenpox outbreak.

30 people at Our Lady of the Sacred Heart came down with chickenpox, that highly-contagious red scratchy welt-inducing disease that is, in this day and age, entirely preventable.

Officials from the state of Kentucky decided then to shut down any non-vaccinated kids, sending them home until the outbreak was contained.

On March 15th, the Kentucky health department made the call that any kid who couldn't provide documentation that they'd been vaccinated against chickenpox would pack up their backpack and go home.

And so, Jerome's family decided to sue.

Seems like a logical course of action. Because contacting a lawyer, paying them hourly, and bringing a lawsuit against an entire state is much easier than getting your damn kid a shot.

You see, Kentucky has a mandatory vaccination law.

Seems like an obvious case, right? Kentucky has a law, the health department sent Jerome home for violating said law, the case gets thrown right out of court, right?

But that law has religious exceptions.

Turns out, if someone in Kentucky claims a religious exception to the law, they're allowed to opt out of the mandatory vaccination law. And seeing how vaccinations are not just about keeping the vaccinated person healthy but also allllllll the people they come in contact with, this loophole seems... suspect.

The Kunkels are arguing their son was discriminated against because of his religious views.

Since anti-vaccination rhetoric generally focuses on the potentially harmful side-effects of vaccines, this is an angle you don't often see — the chicken pox vaccine was created using cells from an aborted fetus. And the Kunkels do not care for abortions. No sir. In speaking to NBC News, Jerome's dad Bill Kunkel said, "Of course, as Christians, we're against abortions."

In any event, Jerome's family doesn't believe in the vaccine, so he never got the vaccine.

My guy just saw that whole vaccine scene happening, and he noped on out of there. Just not for him, sorry!

And you can probably guess what happened next.

We got us a Red Wedding, Keyser Soze, Bruce Willis is dead the whole time-style shocker coming up here.

Nah, Jerome just got the chickenpox.

Sorry for hyping that. He just got the illness that literally everyone in the entire world knew he was going to get.

There's a certain "karma's a bitch" vibe to this story.

The dude made a stink about not getting the chickenpox vaccine, and then he gets chickenpox? What'd you think was gonna happen?! To again paraphrase the greatest joke-teller of our time, if you know there's a chickenpox outbreak and you don't get vaccinated, you might... *the entire audience cheers along* get the chickenpox.

But that isn't what this is about — the Kunkels wanted Jerome to get the chickenpox.

Bill Kunkel also said he used to have "chicken pox parties. You'd get them and you'd get them over with." The Kunkels' objection was never over whether or not the vaccine would work — it was about whether or not avoiding the disease was worth betraying their morals. To Bill Kunkel, at least, the answer is a big fat "no."

Now that he has chickenpox, Jerome and his lawyers hope he can get back to school soon.

Having now missed almost a month and a half of school, you have to imagine Jerome is just itching to get back. (It would be a dereliction of my duty to not make a pun here, so know that he is also itching his back.)

His legal team has even argued that, had he not been banned, Jerome could have had his chickenpox over and done with by now.

It's the same defense you see a lot of defense attorneys use on serial killers who were active over long periods of time — if the victims had just approached him so they could die earlier, we could all be home by now! (It is a very effective tactic on tuckered-out juries. Trials can take a long time!)

Of course, there are a litany of problems with that line of thinking. First of all, Jerome is now susceptible to shingles.

Listen, shingles are gross — so gross, in fact, that I looked for a shingles .gif to put here, and out of respect for you, I decided to hold off. But once you've had chickenpox, the chickenpox virus still lays dormant in your body, which makes it much more likely you'll catch the brutal little clumps of rash that are shingles.

Second, refusing the vaccine puts people who can't get the vaccine for real reasons (as opposed to the Kunkels' anxiety-driven reasons) at risk.

Be it that they're pregnant or have compromised immune systems, some people simply can't be vaccinated. The more people who get vaccinated, the fewer people there are to spread the disease.

And finally, Jerome just didn't have to get chickenpox.

He could have avoided the whole illness all together! This isn't like getting a ticket on street sweeping day because you forgot to move your car — everyone knew getting a chickenpox shot would prevent chickenpox, and they all decided against it.

All that said, this ordeal has had some personal consequences for Jerome.

"The fact that I can't finish my senior year in basketball, like, our last couple of games, it's pretty devastating," Jerome said to NBC affiliate WLWT. "I mean, you go through four years of high school playing basketball, you look forward to your senior year." And yes, that is a bummer. Whether or not it was preventable, this kid lost out on an important moment in his life, and that sucks.

But now that Jerome's had chickenpox, he can return to school.

Presumably basketball season is over, but Math and Science and Gym season are year-round, baby! Jerome will be allowed back to school after his red bumpy-bumps have rashed over (that is the worst sentence I've ever typed). Once you get chickenpox once, you can't get it again.

That's because chickenpox is the Double Jeopardy of diseases.

But unlike Double Jeopardy, chickenpox is not a fun, thrilling romp.

I don't know about y'all, but I was on my feet rooting for Ashley Judd to kill that no-good husband of hers. When I had chickenpox, I was the opposite of on my feet. I was in bed.

Here's why the Kunkels' viewpoint is so dangerous.

In that same interview with NBC News, Bill Kunkel said, "I don't believe in that vaccine at all, and they're trying to push it on us."

The mentality that makes him say, "This wasn't so bad for me, so you can get through it" is great...

... until it isn't. It's like saying, "we smoked packs and packs of cigarettes, and we're fine!" We know better now! If you went through something bad, don't tell other people it'll toughen them up! Help keep them from having to experience it!

No word yet on what happens to the lawsuit.

Once Jerome is healthy, he can walk back into school. But he was suing to be reinstated back into school. So what happens in legal disagreements when circumstances dictate that, you know what? Both parties get what they want? I honestly don't know!

But hopefully it will still go to court, so it can be thrown out.

It would be nice to have it on record that there is absolutely a limit to how far your religious beliefs can take you, and that that limit comes before you make other people sick.

After all, a government's job is to protect its people.

The State of Kentucky has an obligation to the people being put in danger by the Kunkels' stance. Obviously, religious freedom is important and should be respected... until it starts to hurt people.