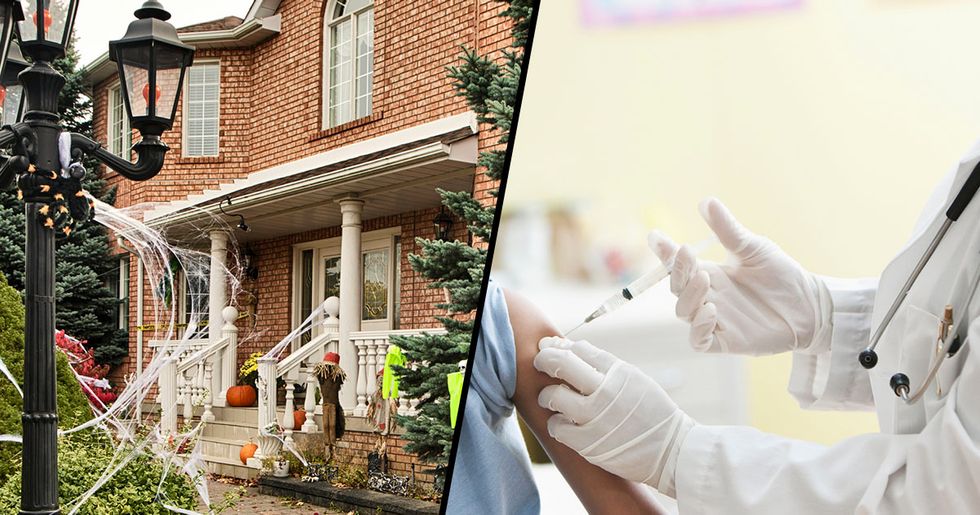 We've all heard the urban legends regarding Halloween candy. Some stories include razorblades and illegal drugs - but we'd never heard one about lollipops infected with a disease. Until now, that is.

Yep, you read the title right. One anti-vax mom saw an opportunity when her son developed chickenpox just before the holiday season. Deciding it was the perfect chance, she decided to spread her kid's "natural immunity" via some contaminated candies handed out for Halloween. The post has been shared on social media by (rightly) disgusted parents. Always double check your trick-or-treat packaging, guys!

Halloween is a magical time of year.

For one night, everyone can dress up as someone they're not and experience a new lease of life.

For most kids, trick or treating is an inescapable part of their childhood. Kind of weird that we go to strangers' houses demanding treats, but hey - tradition demands it.

And who doesn't love free candy?

If you collect an enormous enough bag of treats from the neighborhood, it can last you right up until Christmas.

But, as they say, there's no such thing as a free lunch.

And over the years, many urban legends have been shared about tainted Halloween candy - although time and time again, it's been proven there's no truth to these horror stories.

Because one story has surfaced this week that has got us feeling a little bit creeped out about Halloween candy. And it seems this one is real.

It comes from one of the most problematic online communities.

In spite of overwhelming scientific evidence to the contrary, some parents believe that vaccinations are not lifesaving, and are, in fact, a huge danger to their kids.

But many feel very strongly about this.

And large groups of parents congregate online to discuss their conspiracy theories surrounding the vaccination industry.

Even though vaccinations can be incredible at preventing various diseases.

And one of the more common ones? Chickenpox. But one anti-vax mom from Australia had a different idea.

She decided to be a "good samaritan."

Rather than preventing chickenpox by traditional (and medically proven) means, she decided to use what she had - her own son's germs.

But her means were particularly creepy.

She chose to encourage her sick son to lick a whole bunch of lollipops, which she then planned to give out to others to help them gain "natural immunity."

And the way she did it?

By putting these infected lollipops out for trick or treaters - exposing the disease to kids all around the neighborhood.

Causing other children to get sick - all for a misguided belief that you're doing them a favor.

In the past, this was a fairly common occurrence.

When one child got chickenpox, parents could host a "chickenpox party," inviting other kids to ensure they get the disease and thus build up immunity to it.

But that was before one thing.

The development of vaccinations. Now, there's no need to take the risk of causing kids to spread their diseases. There's a much safer way!

But that's not what this one mom thought.

Instead, she seemed to truly believe she was doing the neighborhood a favor by spreading her son's unpleasant (and sometimes quite dangerous) disease.

The mom in question was also generously offering some of her son's infected saliva to other anti-vax parents - for a small fee, of course.

It was shared originally on an anti-vax group - but the screenshot (with names redacted) was shared by a pro-vax group to draw attention to the issue.

It got a huge response.

Many feared this woman was a registered nurse, although it now seems as though she's just impersonating one. The police have also been told about the issue.

It should go without saying ...

But being anti-vaccination is misguided - and puts, not only their own kids at risk, but also the other children they interact with.

We're in an age where our kids don't need to get sick.

So the fact there are some still stubbornly avoiding medical advice really boggles the mind. Want to learn more about chickenpox parties? Keep scrolling for all the details on the bizarre trend.