Apparently, Having Your Drone Stolen by a Hawk in Midair Is a Thing That Happens to People | 22 Words 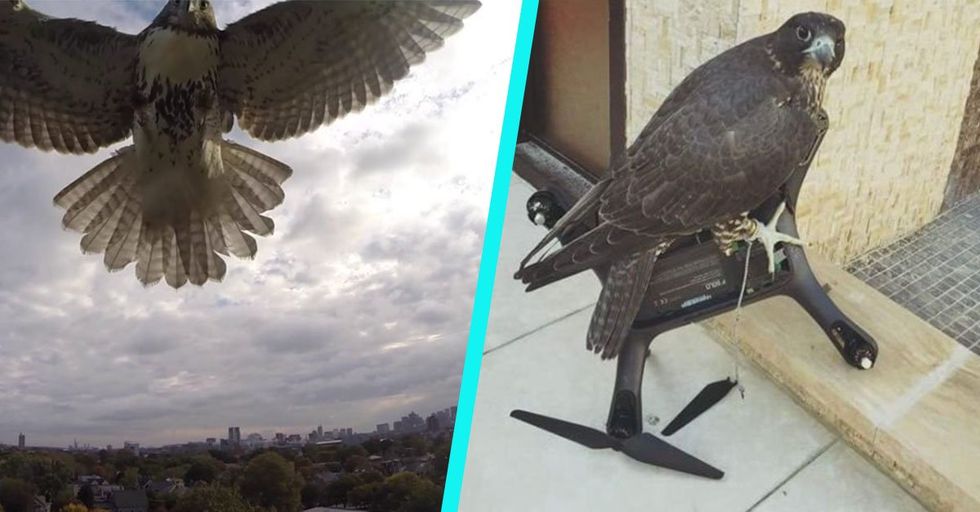 Apparently, Having Your Drone Stolen by a Hawk in Midair Is a Thing That Happens to People

Picture life as a hawk. Just flying around, hunting prey, doing hawk stuff... when all of a sudden this weird new shiny animal starts flying around everywhere.

What do you do?

You kill it of course. Because you're a hawk, and you're not to be messed with.

This guy was flying his drone, when a hawk downed it and was clawing at it. He tries to scare it off by being a big tough guy, but the hawk isn't fazed at all. In a fight between a hawk and a drone-owner, I'll take the hawk every time.

The complete lack of reaction by the hawk is the best.

In fact, the hawk even gets closer to the guy like, "DO SOMETHING THEN!" (The man, proving he's not TOTALLY unreasonable, does nothing.)

You can't help but be on the hawk's side here. Further, it's not the first time this sort of thing has happened. Nor is it even the tenth.

These attacks, as you'll see in the glorious videos to follow, this sort of thing is pretty common in the skies. I mean, hawks are airborne predators, so you have to respect their space. Or else...

Some people were upset at the guy for threatening the hawk.

But don't worry, the hawk doesn't speak English, so it's unlikely its feelings were hurt.

At the very least, he should've seen this coming.

Since apparently hawks and drones have had quite a history in a brief period of time...

This GIF of a hawk taking down a drone is probably the coolest thing ever.

Hawks are the drone's natural predator, in as much as drones have natural anything.

In this video, two eagles steal this guy's drone and take it for a joyride. It's an amazing video, but the disappointment when they realize they can't eat it is the icing on the cake.

Eagles are so good at taking down drones, they're actually being professionally trained for that exact purpose.

Imagine being the eagle picked for that job. Do you at least get a paycheck?

More and more people have access to drones, so the government was looking for a way to shut down malicious drones if needed. Apparently, the answer was "eagles."

It's weirdly satisfying to watch, but also impressive that they managed to train them for such a specific, contemporary task.

I would figure drones are better at taking out other drones, but animals seem to have it out for them.

Birds aren't the only animals with a distaste for drones. This tiger video is the best.

These giant chubby tigers were chasing this drone around and after a while, they finally clawed it out of the sky and tried to give it a nom. They couldn't eat it, but at least they got it down.

Apparently, this facility uses the drone to help the tigers exercise.

Because, as you can see, they're a bit overweight... but freakin' adorable!

It's kind of amazing how much all animals hate drones though.

No matter if they're in the wild, or in captivity, instincts say screw your drone, humans.

There's only one worry about all these bird vs drone incidents...