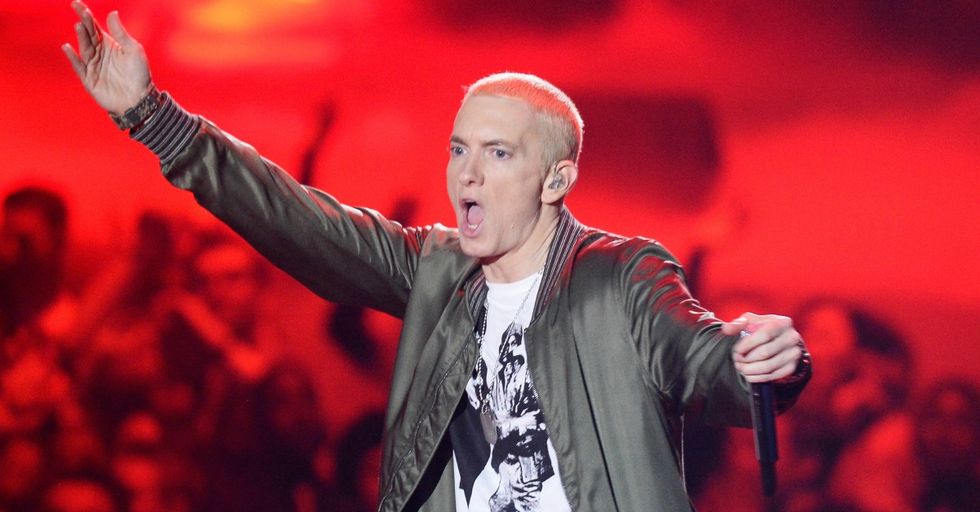 Apparently, If You Enjoy These Two Specific Pop Songs, You're a Psychopath

A psychopath is defined as "a person suffering from chronic mental disorder with abnormal or violent social behavior." Although it seems that psychopaths are largely misunderstood (they're usually not the knife-wielding maniacs that first come to mind), the thought that you could be one yourself is pretty terrifying.

There have been a lot of meaningless "psychopath tests" circulating on social media lately, and while most of them have been debunked, one recent discovery actually has science to back it up.

We'll give you a hint: it's not great news for Eminem fans.

Music has been shown to be quite beneficial for your mental health.

It can alleviate stress, clear your mind, and even help motivate you, depending on the style. And while there is a link between music and an improved mental state, there also seems to be a connection that's not quite so positive.

A recent study by researchers at New York University garnered some surprising results.

They gathered a group of 200 volunteers and proceeded to play 260 songs for them. They noted which songs were most popular with the volunteers with the highest psychopathic scores as well as the lowest. And just what were these two songs most likely to appear in a psychopath's iTunes library?

Blackstreet’s “No Diggity" and Eminem’s “Lose Yourself."

Head researcher Pascal Wallisch told The Guardian that “The media portrays psychopaths as axe murderers and serial killers, but the reality is they are not obvious; they are not like The Joker in ‘Batman'." "They might be working right next to you and they blend in. They are like psychological dark matter."

The group of volunteers included young, educated individuals from a variety of different economic and ethnic groups.

In order to see where they fell, researchers had them take the Levenson Self-Report Psychopathy Scale. The standard personality test for identifying psychopathy, it was first developed in 1995 and is still commonly used today.

Roughly 1 percent of the general population falls under the description of a psychopath.

In the U.S. prison system, about one out of every five prisoners have been shown to have some type of psychological disorder. And while they were able to identify the songs with the highest link to psychopathy, they also found two of the lowest ones.

It turns out that volunteers who were fans of Sia and David Guetta’s "Titanium" fell at the lowest end of the spectrum.

"My Sharona" by The Knack was another song that corresponded to low psychopathic scores. Pascal added that these findings are still preliminary and unpublished, so if you happen to be a fan of Blackstreet and Eminem and are starting to panic, don't.

The researchers are hoping that these early findings can lead to more in-depth studies with a larger number of volunteers.

Pascal also stated that these were not, in fact, the only songs that tested high among psychopaths. They chose to omit these findings from the study in order to prevent future research from being compromised.

“You don’t want to have these people in positions where they can cause a lot of harm. We need a tool to identify them without their cooperation or consent," Pascal added.

Although the two share several traits, there are key differences.

A sociopath is defined as "a person with a personality disorder manifesting itself in extreme antisocial attitudes and behavior and a lack of conscience." Sociopaths are better able to blend in with society, while psychopaths, who are often thought to simply have a severe case of sociopathy, tend to run into trouble with the law.

Psychopaths are often portrayed in movies and on television as terrifying monsters.

Oxford psychologist Kevin Dutton explained to The Guardian why we as a society are so fascinated by people with this type of disorder. “The coming together of the dark, visceral, primeval psychopathic mind and the higher aesthetic of classical composition is inherently incongruous, and there is a whole body of literature on the creative potential of incongruity," he said.

“It is the hypnotically captivating and age-old appeal of the ‘beauty and the beast,’ only under the same cortical roof."

Although we're collectively intrigued by psychopaths, it seems we're still somewhat fuzzy as to how to identify them in our daily lives. So maybe don't start playing Eminem songs for your boss to see their reaction just yet. Try to wait until the larger study comes out.

There's still one nagging question in regards to this study that we can't quite let go...

Are there really people out there who don't like "No Diggity"? It seems like there must have been some type of recording error, because we don't see how that could be possible.
20%