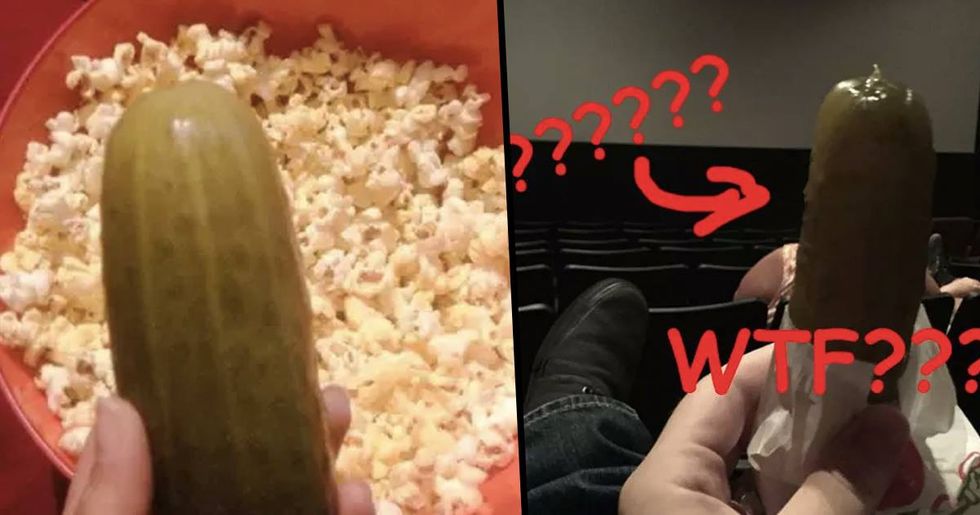 When you think of cinema snacks, typically your mind jumps to coke, pepsi, maybe some chips, but definitely POPCORN. One of the last things on your mind would be that one little thing that some people ask specifically to be taken out of their burger...the pickle. However, cinemas in Texas sell them on their own as snacks and what's more, they're giant! And whole! They look like something you'd expect to see if you were undressing The Hulk.

Not only are they sold all in one piece, they're eaten like an apple, which must be devestating for those people who can't stand the noise of people eating. Take a look at some of the pictures collected of them and see for yourself, it is not urban legend, it is the truth!

Take your pick (and pic)

A mammoth sized gherkin is on offer as a cinema snack. Look at it just sat there on the menu as if everything is totally normal...

Mingling in with the real candy, the Gherkin does its best to blend in hoping to be chosen by the movie goer.

Like a homeless person with a bottle of liqour in a brown bag to remain incognito, it's probably the best option with regards to eating these things.

A good novelty snack though to really experience the true Texan way! People go crazy for it.

Can you really concentrate on the actual movie when you've got one of these in your hand? It just begs so many questions!

Best of both worlds

If you really can't decide, you can get popcorn as well as the pickle. The two might go hand in hand...literally.

Part of the confusion is, is it actually to eat? Maybe it's there to be fashioned into some sort of popcorn scooping device? Who knows!

Imagine this famous slip if the popcorn was substituted for a pickle? It just wouldn't be quite the same would it...

Popcorn really is a joy

Popcorn is one of the world's finest foods...I mean, this guy isn't even watching anything...he's just happy to have popcorn.

Deer popcorn, I'm writing to say I miss you...

Nothing says movies quite like it. You're not really watching a movie unless your grazing on it so hastily that it's all gone by the time the trailers are over. Nobodies finishing their pickle before the film finishes.

Notice there's no pickle marching in this snack conga line...I actually feel a bit upset for it now. They look like they're having a great time.

There must be a market for them, Texans must absolutely adore them? Or they've had a bumper harvest of cucumbers and just need to shift them fast.

It's cool to be different

Is it? There must be a line...is it cool to be so different you'r eating something that people specifically ask to be taken out of their burgers? Would you eat a bucket full of anchovies in public? Probably not.

Maybe it was made fashionable by a wave of celebrities jumping on the bandwagon...and yes Mum, if I saw Tom Hanks jumping off a cliff, I'd certainly follow.

You are what you eat!

Be careful, because who knows? They might be delicious and you could end up getting addicted to them.Remember, you are what you eat...

Really the key to snacking is to have as much of everything and as much as possible, if a pickle manages to slip in there, then why not?

Why not try a different vegetable, why not dig into a raw onion while you're at it? it'll be perfect for those sad movies you watch, you can blame the tears on the onion. Genius

If people are eating pickles whole...why not push the boat out? Take a plate of spaghetti! At least it doesn't make a gruesome sound that'll annoy people

The great thing about cinemas is, they're pretty dark so you don't have to be that glamerous when you eat.

A sandwich for the show.

Chop that pickle up and add it to your super sandwich, it'll just feel more right, won't it?

Come prepared with a slive of pizza around your neck. You can't go wrong with pizza.

A safe bet for a cinema snack is the good old classic carrot. The good thing about the carrot is it's so loud and annoying everyone will probably move away giving you extra space. Win win.

If you're eating salads all day, do you even have enough energy to last through a whole movie?

While "Schindler's List" was on at the cinema's they banned popcorn out of respect...I imagine the pickle would not only have been banned, but not even made out of respect.

Don't be surprised if people complain, wanting their money back because they couldn't hear what any of the characters were saying.

You'll be catching the bus straight home after being given the boot from the theater. this would never have happened had you chosen to be totally unadventurous and settled for good old fashioned buttery popcorn.

Let's be honest, who prepares a pickle when they're just at home watching Netflix? Nobody. And let's keep it that way.