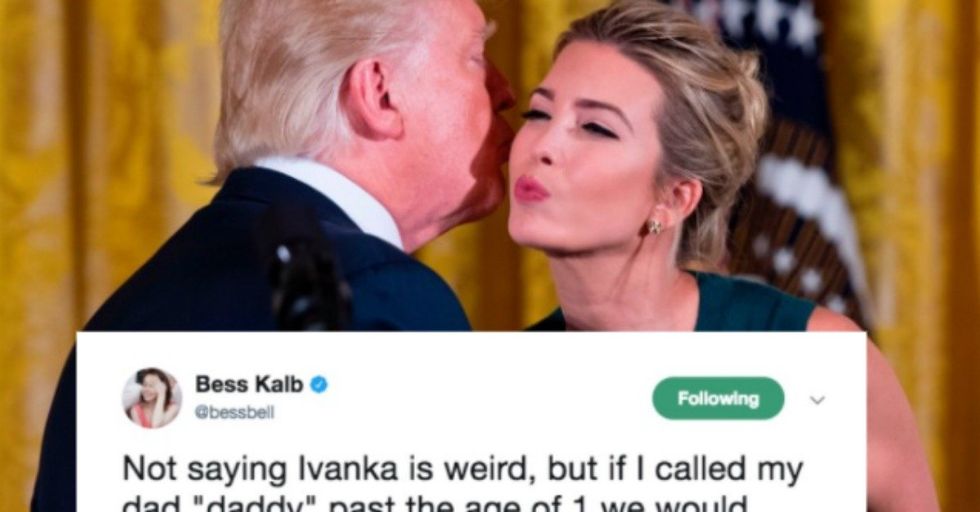 Donald Trump traveled to North Dakota on September 6th to give a speech on tax reform and somehow ended up bragging to the crowd about how Ivanka, his 35-year-old daughter, and advisor in the White House, still calls him "Daddy."

Needless to say, Twitter flipped. The President of the United States has a nasty history of talking about women in a certain way, specifically his own daughter. So, while this move wasn't surprising, it did give everyone on the Internet the heebie-jeebies.

He's made so many awful comments about his daughter, in fact, that the Independent compiled them all into one comprehensive article. "When Donald Trump was watching his 16-year-old daughter Ivanka host the 1997 Miss Teen USA pageant, he turned to the then-Miss Universe and asked: 'Don't you think my daughter's hot? She's hot, right?'" Strike one — at least for things he said on the air.

The first time was in 2003, when he bragged about Ivanka's body: "You know who's one of the great beauties of the world, according to everybody? And I helped create her. Ivanka. My daughter, Ivanka. "My daughter, Ivanka. She's 6 feet tall, she's got the best body. She made a lot money [sic] as a model — a tremendous amount."

One year later, he was back on "Howard Stern."

In 2006, in an appearance on The View, Trump said one of his most infamous lecherous comments about Ivanka.

When he was asked how he'd react if Ivanka posed for Playboy, Trump responded, "It would be really disappointing — not really — but it would depend on what's inside the magazine." Nasty enough, but then he kept going: "I don't think Ivanka would do that, although she does have a very nice figure. I've said if Ivanka weren't my daughter, perhaps I'd be dating her."

The comments haven't stopped as the years have gone by.

In a 2015 Rolling Stone interview, the author wrote, "After I met Ivanka and praised her to her father, he said, 'Yeah, she's really something, and what a beauty, that one. If I weren't happily married and, ya know, her father...'" Even he couldn't finish the worst sentence ever uttered. Despite these comments, despite behavior toward many women that proves otherwise, Ivanka has always stood by her father and claimed that "he has total respect for women." It's led many to believe there's something weird about their relationship. And when Trump pulled Ivanka up on stage in North Dakota, he stoked those feelings...

On September 6, Trump was giving what should have been a low-profile, not weird speech about tax reform in North Dakota.

But then he went and did this. He stopped whatever he was saying and went, "And by the way...Ivanka Trump. Everybody loves Ivanka." Then, he made her join him on stage while spewing this: "Sometimes they'll say, 'You know he can't be that bad a guy. Look at Ivanka." While she was making her way to the stage, he couldn't help himself: "She wanted to make the trip. She said, 'Dad, can I go with you?' She actually said, 'Daddy, can I go with you?' I like that."

Many think it's super weird for a grown woman to still call her father "Daddy," especially when that woman is a senior White House advisor.

It also didn't set the bar very high for Ivanka Trump. Sure, she got him to agree to let her tag along on a trip, but how about convincing him not to "grab women by the p***y" or not ban transgender people from the military or not to end efforts to end the gender wage-gap? So far, her track record is pretty grim.

According to this Twitter user, there are several people who probably call Trump "Daddy."

Poor Tiffany. Has anyone checked on her lately? Is she OK?

Not surprisingly, Trump's speech was full of lies.

Chief among them: "Everybody loves Ivanka." Everybody definitely does not love Ivanka, but we can't really pinpoint why. For some reason, the word "complicit" comes to mind. The Internet wasn't done reacting, though...

While the President is busy fawning over his daughter's body, his other kids are getting the cold shoulder.

Through all the jokes, though, the nausea was real.

The word "Daddy" just has such a strange connotation behind it, and for it to be publicly touted by the President as something he likes his grown daughter to call him, the same grown daughter he's said weird things about for years...well, yeah, it's understandable that people are creeped out.

Hmm...this guy has a point.

Call your father "Daddy" if you want. Let him brag about how you call him "Daddy." Unless you're a grown woman and he's a creep and/or the President of the United States.