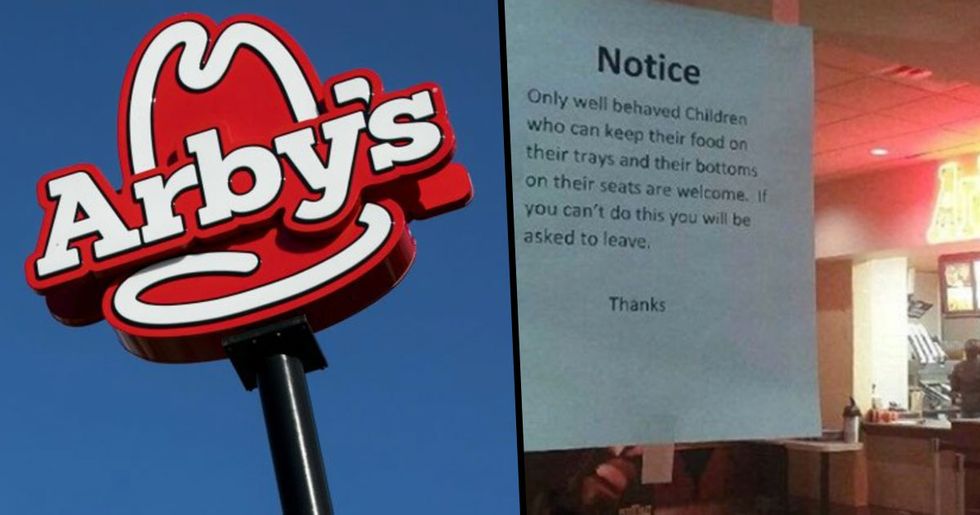 The Minnesota fast-food sandwich chain, Arby's, has come under fire this week.

The Elk River branch has been called out by members of the public for a sign.

The sign was deemed insensitive and suggested Arby's was not a "family-friendly" chain.

That being said, since the story went viral there have been many people defending the sign, saying it should never have been removed.

It's natural for kids to play with their food.

Exploring their food by playing with it is perfectly natural for young kids.

Taking kids out for food can be stressful.

Any parent knows that navigating the trials of taking a hungry child out for food can be the ultimate challenge.

@DailyMail Everyone wants to be offended by something today. What's the big deal with the sign? Kids ought to have… https://t.co/uU3tRxtSKx
— GrandOldPenguin 🐧 (@GrandOldPenguin 🐧)1573693448.0

It seems that Arby's employees aren't the only ones that get annoyed at young kids running wild.

Arby's is home to the curly fry.

If you are a fan of Arby's you'll know that whatever their views on children are, they sure do have the best curly fries in all the land.

It not where you go for a legendary chicken sandwich though...

It seems the anti-children sign was not the only sign-fail Arby's has had this year.

You should never write a sign when you're angry.

Which is clearly what happened when the staff member at Arby's wrote the fateful sign.

If it had been written differently, there might have been a different outcome.

@StellaNews8 @Arbys Hard subject, there are some parents that let their kids go wild but we also have some that do… https://t.co/H2Lfag5gRF
— Rita Brenes (@Rita Brenes)1573633364.0

Some people agreed with the general message of the sign but felt it could have been worded better.

Perhaps it was written by a spiteful employee.

It's clear whoever wrote the sign was not having a good day.

They're not necessarily going to be the best wordsmiths. Can we really penalize them for a badly worded sign?

Can't the food speak for itself?

I mean, Arby's never promised to be some kind of daycare center.

I guess it was a little prejudiced...

As this Twitter user points out, the sign suggests they will only banish unruly children from the restaurant. But what about unruly adults, eh?

After the sign was removed, the chain released an official statement saying: "We've spoken to the restaurant team and have removed this sign as this does not reflect our company values and the family-friendly environment we aim to provide in our restaurants."

The team and its manager were disciplined.

Ensuring the public knew that Arby's was taking the situation seriously, they explained that they were taking action. In the statement, they also said, "We recognize the language on this sign was insensitive. We removed it quickly, and have disciplined the manager and team working at the restaurant."

Personally, I feel sorry for the employees.

I mean who knows what kind of day they were having and how badly they were being terrorized by unruly children.

The parent that reported the sign, mum-of-3 Christine Hemsworth, spoke to KARE-TV, saying "I was shocked to find a sign like that. It is a fast-food restaurant, it's not something with white tablecloths. It's supposed to be family-oriented as far as I knew."

It seems Arby's are trying hard to turn things around...

It looks as though they're even giving out mini Arby's uniforms to kids that come into their stores! Good luck making people think you don't hate children. In other news, continue scrolling to read about the older people replaying teenage workers in fast food joints all across America.