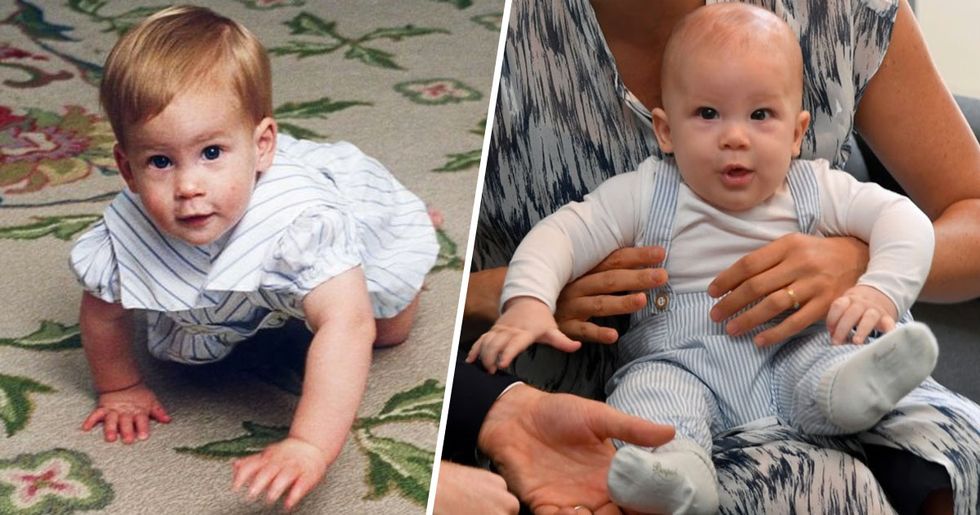 Archie Looks Just Like Prince Harry as a Baby

Prince Harry and Meghan Markle are never far from the headlines - and this is even truer as their family grows.

For instance, this Father's Day, the two broke the internet by posting an exclusive snap of their new son, Archie, on their official Instagram account, and it also seems like the newest addition to the royal family is a hit - as Major League Baseball has proved.

But this week, baby Archie made his first official public appearance during the royal tour of Africa and the photographs are unbelievably cute. Keep scrolling to get a glimpse of how adorable the royal baby is, and the striking resemblance he bears to Prince Harry as a baby.

This Father's Day, the account shared a new and exclusive image of Prince Archie that got everyone online talking.

They shared another wonderfully cute update on their social media.

It was when the two attended their first Major League Baseball game.

The Duke and Duchess of Sussex are currently on their 10-day tour of Africa.

The tour sees Harry and Meghan visit South Africa as a part of a program designed to cover their favorite charitable causes and boost Britain's relationships abroad.

They have already been kept extremely busy...

On their tour so far, the duke and duchess have visited South Africa's oldest mosque and visited a charity that provides mental health support for young people. Meghan told teenage girls in a deprived part of South Africa that she was visiting the country, not only as a member of the royal family, but also "as a woman of color and as your sister."

The couple will also visit parts of the country that the late Lady Diana visited...

Harry will honor Princess Diana’s advocacy against landmines in Angola by making a trip very similar to the one that his mother made in January 1997, when she walked across a minefield in Huambo in central Angola.

Baby Archie is also on tour with his royal parents...

And we got the opportunity to see some beautiful photographs of the baby's first official royal appearance.

Archie came along to the meeting with the Archbishop Desmond Tutu in his Legacy Foundation in Cape Town.

Archbishop Desmond Tutu is well known for his campaigning and has gained a great deal of respect in his country.

The resemblance to Prince Harry is just uncanny...

Archie is clearly the double image of his dad, and it's safe to say that he's just as cute as Harry was when he was a baby.

The BBC reported that the pair joked about their son's time in front of the cameras, in which Meghan said: "He's an old soul," and Harry remarked: "I think he is used to it already."

This was a special day for many...

The Archbishop said that he was "thrilled" by the "rare privilege and honor" of meeting the royals.

"Thank you, Archbishop Tutu, for your incredibly warm hospitality, Archie loved meeting you!" they wrote, sharing a beautiful snap of the Archbishop giving Archie a kiss on the head.

But people can't believe how much baby Archie looks like Prince Harry as a baby.

Since the new photos surfaced, people seem stunned at how much Archie looks like his dad.

Obviously it's hardly uncanny that Archie will look like his dad to some extent, but the resemblance is utterly striking.

Although he definitely has the signature Markle nose...

And his eyes are a blend of both his parents.

We wonder if he'll inherit his dad's ginger locks...

We'll have to wait a little longer for his hair to come in to see.

They are quite simply, a beautiful family.

The duke and duchess seem to be doing an amazing job raising baby Archie, and we can only hope that more photographs of the little one will be released very soon.