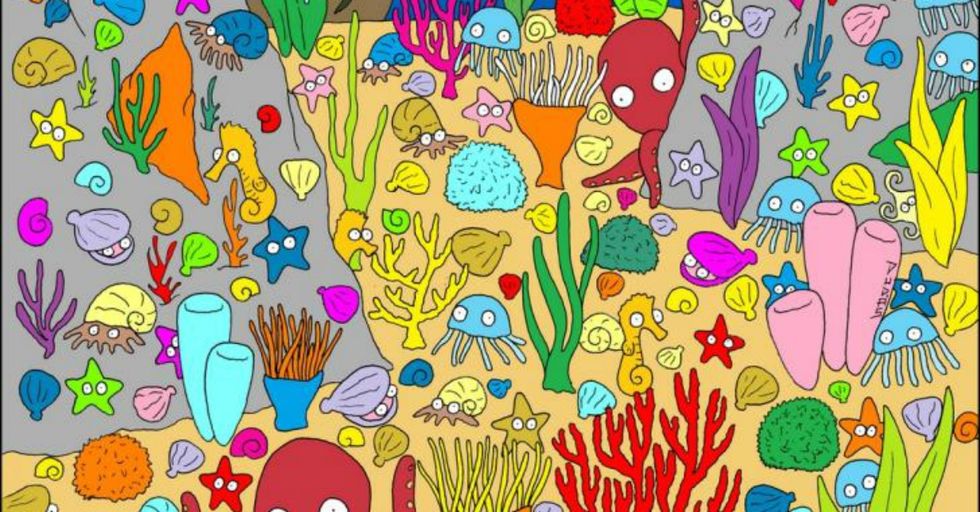 Are You Sharp Enough To Find the Fish at the Bottom of the Ocean?

Growing up I used to love those Where's Waldo books and would spend forever trying to find that freaking dork on the beach, in outer space, on a train. Come to think of it, he was really pretty anti-social what with all the hiding that he did.

Maybe that's why I liked him so much.

That said, the Internet loves to look for things in pictures, and thanks to the Hungarian artist Gergely "Dudolf" Dudás, we have a stumper for you today.

It sounds simple enough: Find the fish in the bottom of the ocean.

Give it a few minutes and really study this marine life-filled illustration. I bet your eyes are starting to cross a little bit and now every freaking thing looks like a fish without actually being a fish. Don't feel bad. It took me awhile, too. If you're ready for the solution...

And if the name Dudolf sounds familiar, it's because he also brought us the viral sensation of trying to spot the panda among the snowmen.

You may have spotted it right away. If so: good for you. You're a better person than I am. But the rest of us are scrutinizing the picture inch by inch... Give up?

Why is this so hard? According to Mental Floss, the panda is just too similar to the smiling snowmen that surround it. When something new or unusual appears in your field of vision, your brain says, “Look at that! Something different!" But we’re really only good at noticing the big, significant differences. The panda looks so much like the snowmen around it that our brains just don't care. Mystery — and puzzle — solved.
20%