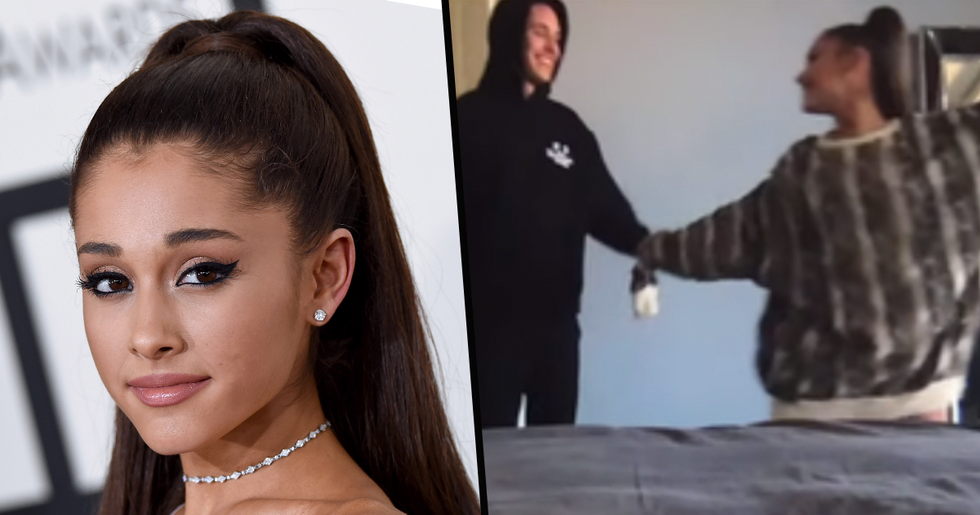 Previously, Ariana has been quite open with her relationships.

But recently Ariana has been keeping her love life especially private from fans. When rumors began that she had a new boyfriend last March, Ariana did not confirm or deny.

Until now. Keep scrolling to find out more...

Justin Bieber and Ariana Grande have released a music video for their song 'Stuck With U'.

And whilst fans where expecting cameos from fans and other celebrities.

There's one thing that they weren't expecting to see.

Ariana Grande was born in Boca Raton, Florida, in 1993.

The Nickelodeon star-turned pop-powerhouse started performing on stage when she was a child, showcasing a musical talent from a very early age.

She's one of the biggest stars right now.

From the age of fifteen, the star began performing on broadway.

Her roles in stage productions, along with a handful of small TV appearances, led her to land her breakthrough role...

Grande propelled into the public eye for her leading role in a very well-known kids show...

She also starred in the spin-off series Sam and Cat.

Grande starred alongside Jennette McCurdy in the comedy, which chronicled the antics of roommates, Sam and Cat, who start a baby-sitting service to earn some extra cash. The show ran for one season, first airing in 2013.

Ariana is now better known as one of the world's biggest pop superstars.

Her debut album, Yours Truly, came out in 2013. Grande is known for having an amazing vocal range, comparable to Mariah Carey, and her music tends to be super catchy, R&B inspired pop.

Since her musical debut, she's well and truly dominated the charts.

Hits such as "Break Free," "No Tears Left To Cry," and "Side to Side," have received significant critical acclaim.

The songstress won the VMA for best new artist way back in 2013 and it has been a winning streak since, with the likes of 2 Billboard awards,  3 VMA's, and a Grammy under her belt, to name a few.

Grande is also famous for a very public love life.

Grande went public with her romance with her "The Way" collaborator, Mac Miller, in August 2016.

Sadly, the pair split after nearly 2 years of dating.

"I respect and adore him endlessly and am grateful to have him in my life in any form, at all times regardless of how our relationship changes or what the universe holds for each of us!" Grande posted on Instagram.

Mac Miller tragically passed away on September 7, 2018, from an accidental overdose.

He was just twenty-six years old. Since his death, Ariana has paid tribute to the late rapper on several occasions and described the grief as "all-consuming."

Alongside a bunch of criticism for cultural appropriation, Grande potentially faced legal issues, as 7 Rings sounds not dissimilar to songs by a whole bunch of artists, including Soulja Boy.

Her fifth album, Thank U, Next,  hit the charts with a bang. With that dollar rolling in, think will be the least of her concerns.

And now she's done it again.

Releasing a fundraising song 'Stuck with U' with Justin Bieber.

The pair released the song that is fundraising for the First Responders Children's Foundation, this morning.

Alongside a music video.

The music video is a video chat that shows the two stars singing with appearances from fans and famous friends.

Including the likes of Kylie and Kendall Jenner and Chance the Rapper.

All the stars were a surprise for viewers.

But there was one appearance that was the biggest surprise of them all.

As we saw Ariana confirm her relationship with boyfriend Dalton Gomez.

In a lowkey appearance at the end of the video where he can be seen dancing with her and kissing her.

The confirmation comes after the pair were first reported to be dating in March.

And as she said nothing, it seemed that she was trying to keep it private.

It was only last month that she admitted to keeping her love life more private on her Instagram story.

Because of the online harassment, she has previously received.

And we don't blame her.

You can watch the video here