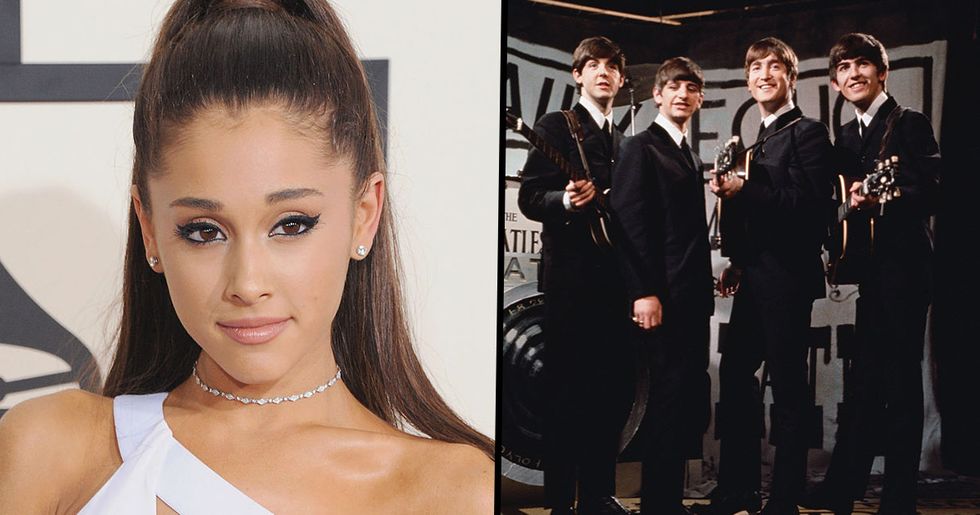 Ariana Grande Equals World Record Held by The Beatles Since 1964

2019 is Ariana Grande's year. It's only February and she is already breaking records. Ariana is now officially part of the female chart leaders' club that includes Taylor Swift, Lady Gaga, Adele, and Rihanna.

Thank U, Next is Ariana's latest album to become No. 1, although it's not her first one. Her recent success in the charts means a change is coming for pop artists and especially women.

Now Billboard announced that she even broke a record that's been kept by The Beatles for sixty years! And she beat Drake to it.

Billboard 200 is a chart that ranks the most popular albums of the week in the U.S. based on how many copies have been purchased or streamed.

Ariana Grande's latest album Thank U, Next was released two weeks ago and is already No. 1 on Billboard 200.

Billboard named the week "the biggest for a pop album in over a year."

It's her fourth No. 1 rank and second in less than 6 months. Among the 360,000 sales, nearly half of them were in traditional album sales.

Thank U, Next was released on February 8 through Republic Records.

The album's release week was also named "the biggest streaming week ever for pop album."

It also puts Ariana in the top 5 female artists with the most-No. 1 albums.

She and Taylor Swift both take the 2nd place, after Lady Gaga, who has 5 No. 1 albums (all released within 8 years).

Ariana also gets the title of "Two No. 1s in Less Than Six Months."

Thank U, Next became No. 1 less than 6 months after her Sweetener topped the chart in September 2018.

It was Olivia Newton-John who had only 5 months and 3 days between the weeks that "If You Love Me Let Me Know" and "Have You Never Been Mellow" became No. 1's.

"Thank U, Next" also had the "biggest week for a pop album in over a year."

360,000 copies might not seem like a lot, but it turns out it's the biggest first-week sales for a pop album in over a year.

The last album to have such an incredible first week was Taylor Swift's "Reputation".

Taylor's album earned an insane total of 1.24 million units back in 2017. "Thank U, Next" also had the biggest album week by a woman since "Reputation".

It also has the "Largest Streaming Week for a Pop Album & Any Album by a Woman" title.

Out of the 360,000 units, 228,000 were in SEA units. Billboard said, "That latter sum translates to a whopping 307 million on-demand audio streams for the album’s songs during the tracking week."

It's an incredible achievement for a pop artist since hip-hop usually rules the streaming units.

"Of the top 20 largest-streaming weeks ever for an album, "Thank U, Next" is the only non-hip-hop title."

Here's the situation that Ariana triumphs in. Halsey's "Without Me" dropped to No. 3-4. Post Malone and Swae Lee's "Sunflower" moved to No. 4-5.

Marshmello and Bastille's "Happier" moved to No. 6.

The number of records that "Thank U, Next" has already broken means pop music is back in the lead.

As Billboard puts it, "Grande has been at the forefront of a turnaround for pop songs' fortunes atop the Hot 100."

In September, rap leaders passed the crown to pop when Drake's "In My Feelings" spent its final week at No. 1, ending "a record 34-week streak of rap leaders."

During those 22 weeks, only two rap titles spent a week at No. 1 each.

It was Travis Scott's "Sicko Mode" and Post Malone and Swae Lee's "Sunflower (Spider-Man: Into the Spider-Verse)."

But the best part of Ariana latest record is what it means for all women in the music industry.

In fact, in just 2 months "women in lead roles have almost matched last year's total time atop the Hot 100."

"Women as credited leads tallied eight weeks at No. 1 in all of 2018 (including the first six weeks on top for "Thank U, Next")."

Finally, Ariana beat Drake with her latest record of having No. 1, No. 2, and No. 3 songs at the same time.

The last artists to break the record were The Beatles who kept it going for 5 weeks in 1964, and even claimed all of the top five in April 1964.

Ariana is only the second artist in 60 years of Hot 100 to claim the top three in a week.

The Beatles held the three spots with "Can't Buy Me Love," "Twist and Shout" and "Do You Want to Know a Secret."

Billboard also noticed a funny thing about The Beatles' and Ariana's records: "The last time the honor was earned, the No. 1 song was about how 'I don't care too much for money; money can't buy me love'; "7 Rings" finds Grande declaring 'retail therapy my new addiction.'"

Ariana Grande is the first artist (and first female artist) to hold the Nos. 1, 2 and 3 spots since The Beatles' phenomenon.

All three of these songs are featured in Ariana's latest album Thank U, Next.

The song has had 63.5 million U.S. streams, an increase of 10 per cent from previous weeks.

"Break Up With Your Girlfriend, I'm Bored"

The song is mainly powered by its 36.8 million U.S. streams, an increase by 52 per cent.