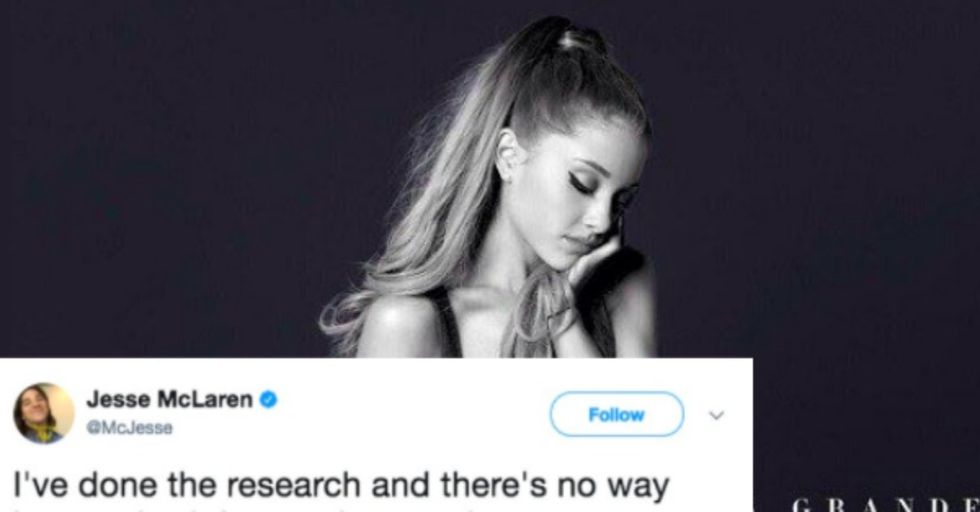 Whether she's licking donuts or doing spot-on impressions of other singers, Ariana Grande is always making headlines. Today, it's for the time she seemingly defied gravity on the cover of her 2014 album, My Everything.

Guys, it's crazy. She floats on a stool like a tiny, angelic-voiced nymph. Her position is inhuman and impossible to recreate, as is demonstrated by the good people of Twitter.

You have to see this. It's insane.

He then exclaimed that "there's no way her ass is sitting on that stool." He tried. He failed. Because he's no Ariana Grande, or could it be because it is literally impossible?

Sure, this guy's got the facial expression down pat, but he's not quite achieving that airy, half-stool slouch. Still, a noble effort.

While this guy got the height, he took up way too much of the stool.

There are only two possible answers: Either Ariana Grande's sitting on a slightly bigger-than-normal stool OR her talent is so out-of-this-world that if she takes a deep breath, she can literally float. OK, it is a possibility that the picture was photoshopped, but that's not as fun.

This person has a creative explanation...

Ariana Grande herself responded to the conspiracy, but not with any sort of comprehensive explanation...