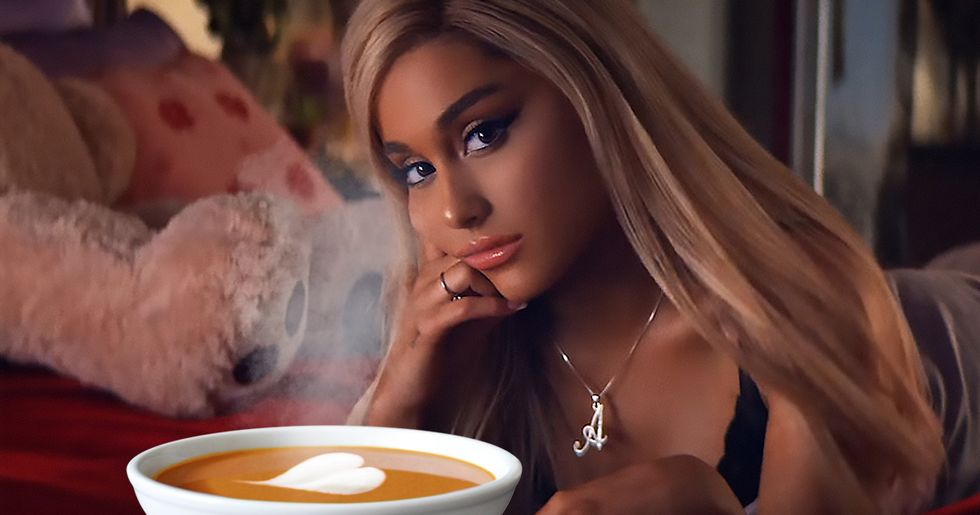 Sometimes you get into the weirdest conversations with people. For example, my best friends and I once got into an argument, which has turned into a years-long conversation, about what food would be best to sleep in. Pancakes? Jello? Tortillas? Maybe it is rice pudding. We don't know. The conversation has been going on probably for about eight years now, and it will continue on until someone comes up with an answer that we all agree on.

No one really knows this, but Ariana is talking about soup in this song.

She wants soup, and so she gets it. She really is an inspiration to all.

But seriously, Ariana Grande was at dinner talking about what type of soup she would be...

guys we’re at dinner discussing what soups we’d be if we were soups and everyone knows what soup they’d be immediat… https://t.co/8iATZMvVCP
— Ariana Grande (@Ariana Grande)1550290832.0

And she realizes that there is a soup that matches everyone's personality. It makes sense. There are about as many types of soup as there are people.

A very respectable choice. Hearty, yet light and sassy. Full of things that are good for you that also taste good.

Ariana herself is either miso or butternut squash.

I very much see where she's coming from. Miso seems simple, but its flavors are out-of-bounds. Butternut squash is similar, but it's got deep, rich flavors as well.

In case you were wondering what Ariana Grande would look like as miso soup, here's a visual:

Honestly, she looks hot here. And I don't mean just heat hot. Although, she does seem heat hot too.

Tomato basil was up next.

This is a very good choice. It's one of those soups that is great on its own but even better when paired with grilled cheese.

And I have to say, it sounds super delicious. And like, super classy too! But still comforting. You go, Ariana's mom!

The waitress knew what soup she was right away.

i asked our waitress if she were a soup what soup she’d be and before i could finish asking she said ‘tempura udon’
— Ariana Grande (@Ariana Grande)1550291122.0

Tempura udon used to be my go-to order at my hometown Japanese restaurant. So good. Good choice!

Ariana remarked that it really is crazy that everyone knows their soup identity immediately.

I really didn't have to think at all. Mushroom barley came to me, and it was right. The people of Twitter began participating in the soup identity game...

This sounds delicious, and honestly, this sounds like a person I would want to be friends with. I feel like you can trust chicken and dumplings.

Chili, great in small doses but too much makes you uncomfortable after a few hours later https://t.co/tfKrqxaudD
— Randolph (@Randolph)1550504622.0

Hey, at least this dude knows himself. But I think he's selling himself short! Chili is a complex mix of meat, beans, veggies, and spices that is totally unique in the soup world.

I am going to go out on a limb and say the person who is chicken corn chowder is probably from the Midwest.

You know, I looked through a lot of soup answers, and this was one of the only people who identified as minestrone, so they're extra special.

"Practical, simple, hot." Um, I love this. Cup Noodles is there when you need it. Always.

Here's the thing: Pho may actually be my favorite type of soup. I love it so much. But I don't think I am pho... Do you understand the difference?

@ArianaGrande i think i’m pumpkin soup, no particular reason i just really feel like i am
— Raphael Gomes (@Raphael Gomes)1550291005.0

Look, you don't have to justify your soup identity to anybody. As long as it feels right, it is right.

Hey, this person is super fun and I want to be their friend. Tortellini soup is like, the fun friend at the party.

Aw yeah! Clam chowder is full of flavor and beloved by all! Only larger-than-life personalities can claim the clam chowder throne.

Classic, comforting, and sometimes unfortunately overlooked, chicken noodle is reliable and trustworthy. I like it.

Busy Philipps, the actress, and late-night host, named herself chicken tortilla, and I totally see it.

Broccoli cheddar is definitely the soup identity of someone who just loves to have a ton of goodhearted fun.

See? It just comes to you. Lobster bisque people are fancy AF. That's like, luxurious soup.

Lentil soup is made up of a lot of little parts that all come together as one. And that is a beautiful thing.

I love this explanation! Plus, it's just fun to say. Try it. Gazpacho! GazPACHO! GAZpacho! I might have a new favorite word.

YouTube star Colleen Ballinger wants to know if Spaghettios count. Well, I say if it's hot and/or savory and you eat it with a spoon, it's soup. So Spaghettios is soup.

This one made me laugh. Share this with someone to find out their soup identity!