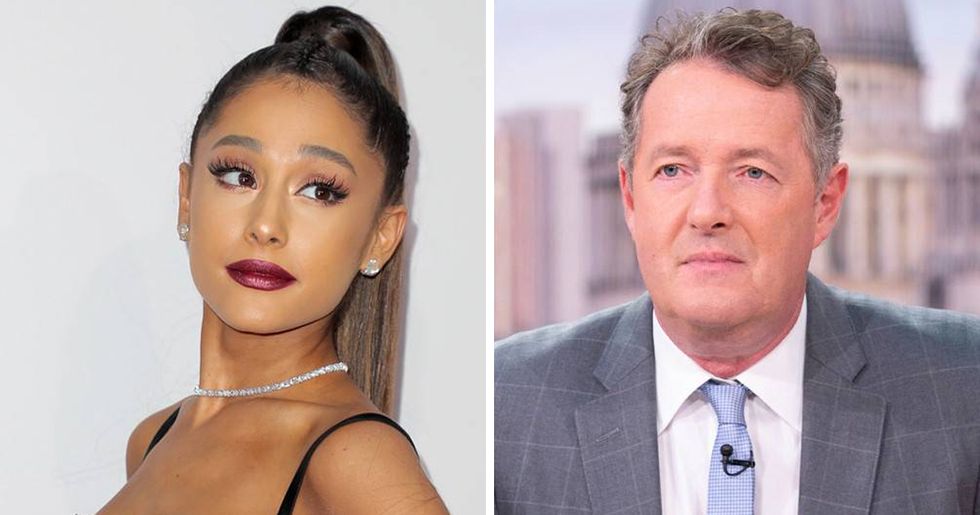 Ariana Grande is more than just a pop-singing superstar. Sure, her musical talents are awesome, but what you might not know is that she's also a master of social media clap-backs! Don't just take it from us; the title of her latest hit song, "thank u, next," can even explain the star's no-fuss attitude– especially when it comes to men. Ariana has always been quick to advocate for the likes of both herself and other women (both on an off of the Internet).

So, it was no surprise when Ariana chimed in on a thread started by Piers Morgan. The British journalist (and frequent Twitter troll) began insulting both Ellen DeGeneres and the popular girl group, Little Mix, over social media this past week. And this is far from the first time Morgan has lashed out on at others online. Thankfully, both Ariana and her mother were there to set him straight!

See what the pop star wrote, and how the Twitter war went down. If nothing else, you can see some pretty sick burns, courtesy of Ariana Grande!twitter

Ariana Grande is always ready with a smart clap-back.

Or, more accurately, she’s adept in the art of destroying trolls on Twitter—and we are here for it!

Today, Piers Morgan was the one annihilated.

Morgan is a journalist and TV presenter but he seems to spend most of his time these days lashing out at people on Twitter.

Morgan had been accusing the group of copying the Dixie Chicks on their album cover, and began condescendingly recommending that Little Mix member Jesy Nelson “put some clothes on."

And if that response wasn’t enough, wait until you see Ariana's tweet.

He accused both Little Mix and Ariana of using nudity to sell records.

With all that misogyny thrown out there, it was time for Ariana to step into the conversation.

She tweeted out this response to Morgan:

If that simple, yet powerful lesson in feminism wasn’t enough, Ariana had more to say.

She also had some advice to offer.

also @piersmorgan, i look forward to the day you realize there are other ways to go about making yourself relevant… https://t.co/eQFiXxsOcd
— Ariana Grande (@Ariana Grande)1542822290.0

Wouldn’t that be the day? We can only hope.

And then she highlighted a bit of hypocrisy:

Really, Piers? Don’t tweet this out on the same day you rip into a bunch of famous musicians for being scantily clad.

And when the media started buzzing over his comments, Morgan came back for more.

But his attempt at being clever backfired on him.

The lesson here: never come for Ariana over social media.

Because, clearly, she will take you DOWN.

Meanwhile, Ariana was also offering encouragement to her fellow performers.

keep fighting the fight divas @LittleMix 🖤 your sisters have your back
— Ariana Grande (@Ariana Grande)1542822119.0

Everyone can learn from the negativity.

And Little Mix responded in kind!

@ArianaGrande thank you ♥️ what we do with our bodies is our choice and we felt liberated owning the negative words… https://t.co/3a8IB0yHxh
— Little Mix (@Little Mix)1542831976.0

Because women supporting women is a beautiful thing.

So, it’s safe to say this round goes to Ariana and Little Mix.

The Twitterverse certainly agrees, with thousands of tweets applauding Ariana’s words of wisdom—and her quick wit!

And we're seeing a ton of memes that are hilarious, and accurate.

From one bard to another…

Honestly, we are all deceased at the awesomeness.

Then there’s this brilliant idea.

Someone make this happen!

Piers Morgan has this unfortunate habit of lashing out at celebrities on Twitter. Don't worry, he's usually shut-down.

Like one war with Chrissy Teigen AND John Legend.

It started with this tweet of Morgan’s, making claims that Muhammad Ali was more racist than Donald Trump.

He then called into question Ali’s legacy.

Does Piers Morgan know the societal issues that Muhammad Ali stood for?

Morgan’s next tweet, about sugar-coating his own legacy, got a response from John Legend.

To which Chrissy Teigen added a jab of her own:

Now THAT’S what we call a power couple!

Chrissy Teigen and Morgan began exchanging barbs, with Morgan insulting one of Teigen’s professions, and soon after, Teigen calling out Morgan’s racism.

And Chrissy made an entertaining "Sixth Sense" reference.

Making a devastating burn and a pop culture reference in one tweet. Now that’s skill!

Then Morgan tried to teach Legend and Teigen about racism.

What’s the racist version of mansplaining? Either way, this is both.

He really wants to win this argument.

To which Teigen tweeted this:

We’ll give this round to Chrissy Teigen (and John Legend)!

Then there was the time he went after Daniel Craig.

This one is especially confusing. Did he attack Daniel Craig for being a caring father? Now, that's strange.

Others, including actor Chris Evans, were having none of it.

You really have to be so uncertain of your own masculinity to concern yourself with how another man carries his chi… https://t.co/MggU8bBd3s
— Chris Evans (@Chris Evans)1539654026.0

When Captain America has to rebuke you, you’ve gone too far.

But it did set off a wholesome chain reaction.

Nearly the entirety of replies to Morgan’s tweet were pictures of Dads carrying their babies. Adorable!

Basically, it’s been a long day for Piers Morgan.

And an empowered one for Ariana Grande, Little Mix, and every other young woman watching this unfold! This Twitter-storm is one wild ride. Share it with your friends!