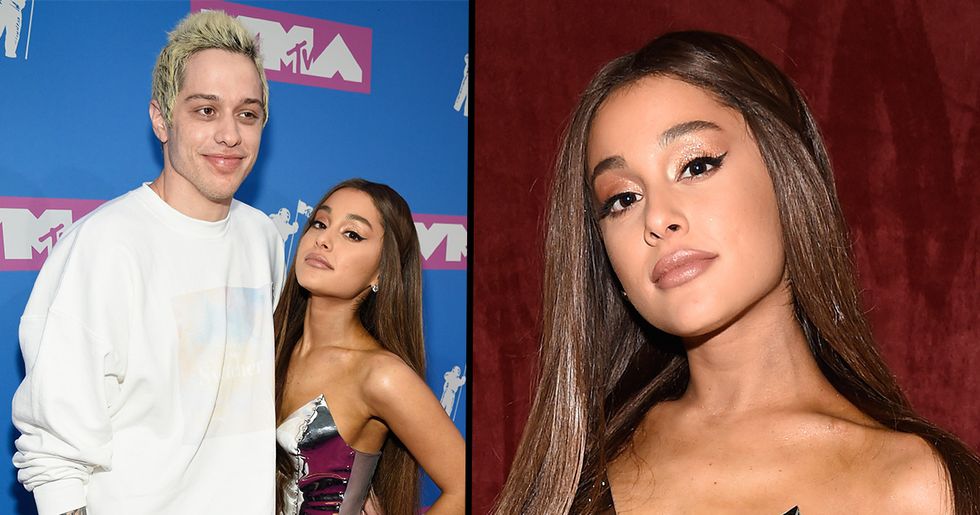 There's nothing quite like young love. It's all-consuming, and it's easy to feel like it'll last forever. Now take the craziness of falling head-over-heels in love with someone, and imagine having to deal with that in the spotlight as a celebrity. It can be intense, overwhelming, and you're also dealing with a complete lack of privacy.

Whenever two celebrities begin dating, it's hard for them to keep anything out of the tabloids. For example, when Ariana Grande and Pete Davidson started a few months back– the internet went berserk. What fueled the fire was that the two of them were fairly open about their relationship, often posting about each other on social media. And how could we forget, Grande even added a track to her album Sweetener called "Pete Davidson."

People often wondered what was going on with their business and their relationship. But alas, their whirlwind romance turned engagement didn't last. In October 2018, the pair split.

Since their break up, it hasn't exactly been smooth sailing.

It's being reported that Davidson has blocked Grande across all social media platforms in the best interest of his mental health.

The famous pair had only been together for a couple of months.

However, in those few months, they moved fast. They shared tattoos with meanings for one another and were engaged in the blink of an eye.

When you know, you know.

Despite the fact that the pair seemed blissfully in love, they split in October. Predictably (because the internet is wild), Davidson received hate from Grande's fans.

He deleted Instagram for a bit, but then returned with a message to his fans.

"I’m trying to understand how when something happens to a guy the whole entire world just trashes him without any facts or frame of reference," the SNL comedian wrote.

Davidson has been open about his journey with mental health.

"To all those holding me down and seeing this for what it is - I see you and I love you," Davidson wrote.

The pop star addressed her fans directly and asked everyone to be "gentler" with one another.

Grande has been vocal about her support of Davidson and love for him, post-breakup.

In her most recent hit, "Thank U, Next," Grande sings, "Even almost got married and for Pete, I'm so thankful."

Grande pointed out that if anyone thought she felt poorly toward Davidson, they've misinterpreted her.

"...so please let whatever point you’re trying to make go. I will always have irrevocable love for him and if you’ve gotten any other impression from my recent work, you might have missed the point," she posted.

Sometimes it's necessary and healthy to make concrete boundaries.

A source reported that Davidson blocked his ex-fiancée, and "is trying to distance himself from her narrative for his health." It's always important to make sure you take the steps to ensure that your mental health comes first.

On Twitter, Grande DM'd a fan explaining her side of it.

The fan then tweeted out the conversation, to which Grande responded with a black heart emoji.

The fan prefaced the tweet, saying, "There's nothing left to say."

"I have never encouraged anything but forgiveness," Grande wrote. "I care deeply about Pete and his health and would never encourage any kind of mistreatment."

As is to be expected, people on Twitter had a lot to say about it.

Some people pointed out that blocking a person post-break-up is a normal thing to do.

They pointed out that he's been through a lot, and no matter what a person doesn't deserve to be horribly bullied on the internet.

It's no secret that her fans are a loyal bunch.

They immediately supported her message.

Grande takes a lot of time to make it clear how important her fans are to her.

There was a ton of support for both parties involved.

Break-ups can be so complicated, but imagine having to do it on the scale of being a celebrity. It can surely be overwhelming.

Many called for internet trolls to leave the comedian alone.

The anonymity of the internet can lead to some seriously horrible treatment and bullying.

It's hard to believe that only a few months ago, the two young celebrities were engaged to be married.

Pete Davidson reportedly blocked Ariana Grande after they split. "You’re not good for my health. I can’t have this… https://t.co/JRch4j0LCI
— Complex (@Complex)1544053697.0

Both have been very open with their personal lives and the individual journey that they are both on.

Grande has had a tough few years.

Her ex-boyfriend, Mac Miller, passed away in September 2018 of an overdose. Grande and Miller dated for two years.

She tweets about her life and what she's currently going through.

It's refreshing to see a celebrity be so vulnerable with her fans.

It's probably why Grande's fans feel so close to her, and why they don't hesitate to defend her. To most of them, she's a real friend.

For someone so young, she's full of wisdom and strength.

She's also not afraid to call things out.

She took to Twitter to call out the bullying and hate that happens across social media platforms.

She also called out Piers Morgan in defense of Little Mix.

also @piersmorgan, i look forward to the day you realize there are other ways to go about making yourself relevant… https://t.co/eQFiXxsOcd
— Ariana Grande (@Ariana Grande)1542822290.0

Grande is not afraid to use her platform and her voice to speak up for what she believes in.

She constantly keeps it real.

what an interesting, challenging, painful and yet beautiful and exciting chapter of life ..... when it rains it pou… https://t.co/LFxJyY1gy2
— Ariana Grande (@Ariana Grande)1541956443.0

It's easy for a celeb and a pop star to hide behind the facade of a "perfect image." Grande does no such thing, and that's why she's so amazing.

While her fans are grateful for Grande, it goes the other way too.

She's always posting about how thankful she is for her fanbase and the support she receives.

Also, can we talk about how she has a tiny pig for a pet?

The perks of being famous. Who wouldn't want to wake up with a tiny pig on their chest?

Grande is an advocate of therapy.

You should never feel ashamed to ask for help– Grande makes that clear.

Life is full of ups and downs.

You could be the most famous pop singer in the world, but it doesn't matter. Life is life, and you never know what's going to come your way.

But if you're surrounded by good people who love you and encourage you, you're good.

Grande and Davidson both seem to be putting their mental health first, and that's the most important thing. Share this with a friend who is obsessed with Ariana Grande!