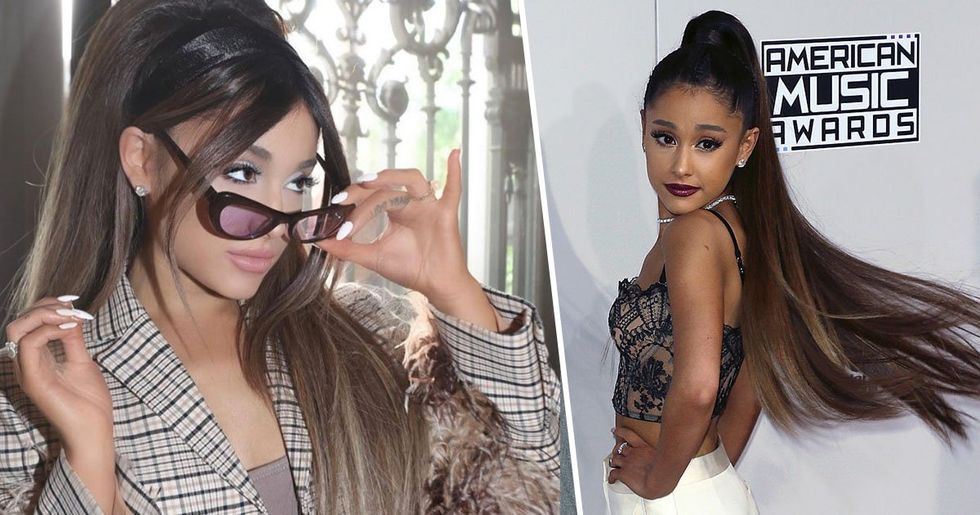 Ariana Grande Shows Natural Hair and The Internet is Shook

This decade has seen a rise in the number of fashion gurus. From re-vamped '90s retro styles to outrageous dresses on the red carpet, we have had the pleasure of witnessing the birth of some pretty awesome style icons.

Amongst them are various pop stars who are known for more than just their talent. Ariana Grande has taken the music industry by storm with her powerful voice but is also known in the beauty world for her cute, but impactful, style. Her signature ponytail seems to always be the talk of the internet. How does she get it so high? How does it stay up? Is it real?

Since this shocking, new picture of the singer was posted on Instagram, the ponytail talk is out, and her natural hair has become a trending subject. Keep reading to have a sneak peek at her amazing locks.

It seems as if Ariana Grande now owns this iconic look.

The popstar's signature ponytail has inspired the next generation of ponytail wearers.

Well, here are the receipts. Grande has been sporting this look since she was a kid and it seems like times haven't changed all that much...

Her mom even commented on the pictures confirming the fact.

Ari's mother, Joan, confirmed what we all knew anyway: "You are and always were stunning."

People just can't seem to stop talking about it!

Some have even gone as far as dedicating whole Twitter accounts to just posting pictures of her ponytail!

Name someone who doesn't love it?

But the singer has revealed some pretty shocking secrets about her long locks...

It's not all fun and games when it comes to maintenance. And these home truths about the style will probably make you thankful that you don't have to go through what she does on a daily basis.

1. Her hair is severely damaged.

Before you knew Ariana Grande for the pop singer that she is, she was actually an actress. From 2010 to 2013, she played the role of Cat Valentine in Nickelodeon's hit show, Victorious.

And if you already know who "Cat" is, then you know she was known for one thing...

Well, two things. Firstly, her character wasn't the sharpest tool in the box.

Secondly, she has bright red hair, so you could spot her from a mile off.

But that kind of color can't be achieved immediately. It takes constant dyeing and that's exactly what her stylists on the show did.

They kept dying her hair red over and over again.

In 2014, she revealed the truth about the condition of her hair on Facebook: "I had to bleach my hair and dye it red every other week for the first 4 years of playing Cat… as one would assume, that completely destroyed my hair. My real hair is back to brown and I wear extensions but I wear it in a ponytail because my actual hair is so broken that it looks absolutely ratchet and absurd when I let it down."

And the whole "constantly dyeing her hair" thing continued all the way into her singing career.

Even though her hair was already damaged by the red, she continued to change the color. We've seen her go from black hair to brown, to blonde, to platinum.

They're all iconic looks, don't get me wrong...

But I would hate to know the condition of her scalp after dealing with all the chemicals...

2. The length of her hair isn't even real.

This one might be painful to hear, but it's true. I guess, in some ways, we always knew that it was too good to be true.

Her luscious locks only look so perfect because she's got some good ass wigs...

But Ariana's not one to fool her fans into thinking that her hair is all real.

In an Instagram video, the singer tossed her wig/extensions to the floor after a show...

Which put all of the speculation to rest. It might not be real, but it looks amazing, and that's all that matters.

She also revealed some other tips for keeping her hair nice and healthy.

Knowing that Ari's hair has been through hell and it is still growing gives me hope about my own. And she recently revealed some tips that will make having a healthy head of hair attainable. Allure talked about how she uses coconut oil on her days off to keep the strands nourished while giving her scalp some TLC with lavender oil.

And it seems as if the singer is standing by her tips.

Recently, Ariana's Sweetener hairstylist, Josh Liu, posted a photograph to Instagram revealing her natural locks and the internet is going mental over it.

Have a look for yourself!

Even despite the filter, you can see her hair in all of its curly glory. And the best thing is, it looks pretty healthy! The tips are clearly working out for her.

And the internet is loving it!

Some are even wondering if she's going to keep this look for her tour!

Wouldn't it be amazing if she actually did?

Some fans have even given her the exact days!

I love how her fans are rallying together to make sure that she keeps her hair natural! It's so refreshing!

Check out these rare photographs of Ari with her natural, curly locks.

I think that I love this style more than her iconic ponytail and that's saying something!

Imagine having hair that looks this good? Can't relate.

Give your hair a break from all of the straightening and dyeing. Follow in Ari's footsteps and you too can have an amazing and healthy head of hair.

And it seems like everyone's now following the trend!

Kylie Jenner has also ditched her long extensions for her naturally short hair and she looks pretty damn good! Keep scrolling to see the pictures!