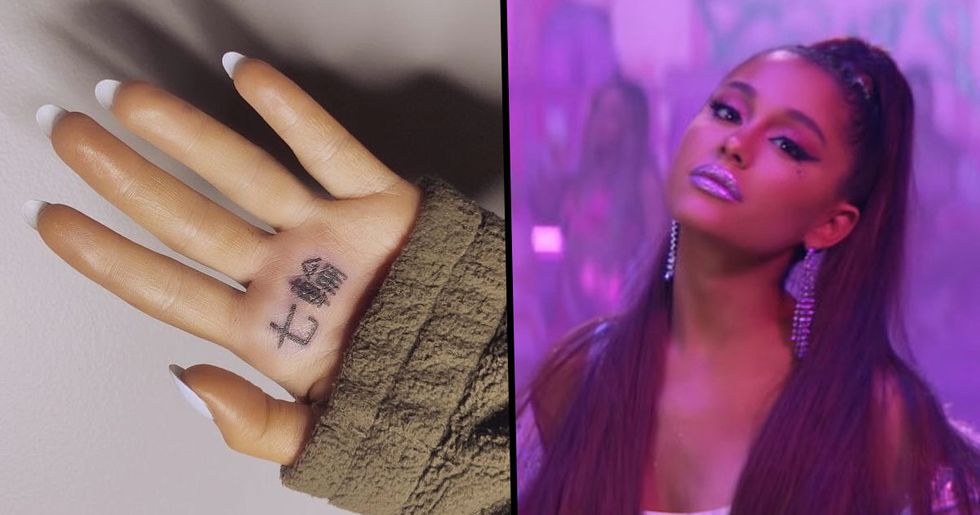 We've all heard those tattoo horror stories - something you thought was deep and meaningful suddenly seeming... less so, in the cold light of day. And one of the biggest culprits for these cautionary tales? Translations.

The problem with getting something tattooed on you in a different language is, essentially, that you can't tell exactly what it says. It requires a whole lot of trust in your tattoo artist, otherwise you're left with a very permanent mistake.

Everyone's favorite ponytail-aholic Ariana Grande has learned this the hard way. Her latest inking (on the palm of her hand) was supposed to be a celebration of her latest hit, 7 Rings. But what it actually says? Well, let's just say, it's a pretty unconventional tatt.

Grande has addressed the issue, and come out with an explanation for why she misspelled the phrase. But fans are a little bit dubious as to her excuse.

Ariana Grande is one of the biggest stars right now.

She's predominantly known as a singer, but she's also an actress, songwriter and, let's face it, an Instagram influencer of the highest degree.

Grande came to fame on the TV.

She's now better known as one of the world's biggest pop superstars.

Her debut album, Yours Truly, came out in 2013. Grande is known for having an amazing vocal range, comparable to Mariah Carey. Her music tends to be super catchy, R&B inspired pop.

Grande is also famous for a very public love story.

They were the definition of adorable, with heavy social media PDAs, matching tattoos, a super-chill engagement story, and even a pet pig.

7 Rings, released in January, broke a ton of streaming records after its release - many of them previously set by Grande herself.

Alongside a bunch of criticism for cultural appropriation, Grande is potentially facing legal issues, as 7 Rings sounds not dissimilar to songs by a whole bunch of artists, including Soulja Boy.

Not that Grande seems too concerned.

Her fifth album, Thank U, Next, is set to come out next month, and we don't think it takes a psychic to predict it'll be a huge hit.

As this latest story proves. For context, it's safe to say Grande is partial to a tattoo. She has a large and ever-growing collection which she often shows off on social media.

Some of Grande's tattoos could be seen as "mistakes."

For example, this one, which reads "Pete" (Davidson) and is on her ring finger. Uh oh.

In fact, Grande has a few unfortunate couples tatts with Davidson.

The pair both have a cloud on their fourth finger, reportedly in honour of Grande's celebrity fragrance of the same name.

Surely Grande has heard the old adage before, about never getting a partner's name tattooed in case of a break up?

Although it seems she hasn't learned from her mistakes.

Because Grande has made yet another tattoo-related blunder - although at least this one is without romantic connotation.

This is Grande's latest ink.

It's on the palm of her hand, and consists of some Japanese symbols. She shared the pic on Insta - although it's since been deleted. So far, so good, right?

But it seems Grande should have done a little extra research before the tattoo.

People saw the image and noticed something a little strange about the tatt's translation. FYI - it was supposed to say "7 Rings," in honour of her newest hit.

But that's not what her tattoo reads.

According to some, the translation of "7 Rings" would consist of three characters, rather than the two Grande has etched on her palm.

And the missing symbol led to quite a different meaning.

Yes, that's right. Grande's newest tattoo rads, simply, "barbecue grill." Perhaps not the celebration of success she was hoping for.

And, thanks to the beauty of the internet, Japanese fans were quick to point out her mistake.

Because what Grande actually got tattooed on her palm?

It reads as "shichirin" - a type of Japanese barbecue grill as seen in this image.

Which (we're guessing) isn't exactly what Grande had in mind.

Although perhaps an ode to the shichirin isn't all that bad. These dumplings look extremely delicious - who's hungry?

As you may have anticipated, the internet had something to say.

One of our favourite comments on this Facebook post simply reads, "I don’t see the mistake here....BBQ grill is close to my heart."

Some others had a different issue with the pic.

What we can only assume to be a heavy facetuning edit on the pic has rendered Grande's hands look very strange - almost as if they're made of plastic, or she can't bend her fingers.

Even staunch fans had to laugh at the unfortunate tattoo.

to be clear i’m a fan of Ariana Grande but her accidentally getting a tattoo in Japanese that says “small charcoal… https://t.co/X53YaWnlBc
— ellie schnitt (@ellie schnitt)1548868499.0

We know mis-translations in tattoos do happen - but we never thought they would happen to one of the most rich and famous women on the planet!

Grande came up with an explanation for her barbecue inking.

According to Cosmopolitan, she claimed, in a now-deleted Tweet, ""Indeed, I left out 'つの指' which should have gone in between. It hurt like fuck n still looks tight. I wouldn’t have lasted one more symbol lmao. But this spot also peels a ton and won’t last so if I miss it enough I’ll suffer thru the whole thing next time." Hmm ... we're not sure we buy it.

Especially since she's now tried to rectify the mistake.

With the help of her Japanese "tutor," Grande has finagled a tattoo redo which she hoped would  leave it saying something close to the intended message. She's shared the updates on her Instagram story.

But even that went wrong.

At least Grande doesn't seem too phased by the saga.

It takes some balls to be able to laugh at yourself - and Grande seems to have them in spades. Let's just hope she thinks a little bit harder before getting her next tattoo.