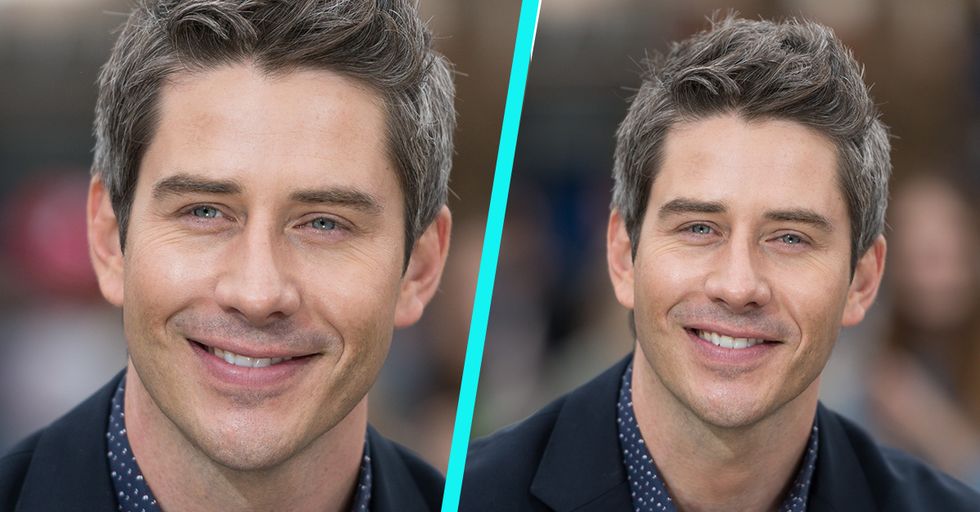 Apparently it’s time for me to hand in my middle-aged straight woman card because you guys, I don’t get the Arie appeal. Okay, okay. He’s a wee bit nicer than some Bachelors of seasons past (looking at you, Juan Pablo!), he doesn’t seem to have a giant ego, and he’s easy on the eyes. When I squint. So exactly what am I not getting here?

I mean, nubile nannies who march around braless seem to like tongue thrusting Arie on the reg. Single gals are revving up for hair-pulling fisticuffs over their next one-on-one date with him. Then again, maybe that’s just more about everyone hating Krystal (which by the way, I fully support). Still, there are just some dots I’m just not connecting when it comes to Arie.

My friends, my friends' moms, and my friends' teenage daughters - they all dig Arie being a racecar driver. Obviously, he digs it too! Just look at that smile, completely caught unawares as a photographer captures his "bad boy with a heart of gold" image impromptu. Hmm.

He keeps his hands where we can see them.

Arie may be the kissing bandit, but he's generally a respectful gent. Observe, if you will, the sheer terror underlying his smile as he clasps his hands in front of him, lest an ousted contestant accuses him of a reach-around on the sly. Nope. Not gonna happen! He's too smart for that.

He touches elephants, and ya'll, they touch him right back.

Arie's "down to earth" persona can best be attributed to his season with Emily, where most viewers came to know him as the intelligent, straightforward suitor with LOTS. OF. FEELINGS. See this elephant moment? Feelings, people. Feeeeeeeelings.

And don't we all dig a guy who hoses off the driveway every once in a while? (Can I get a witness?)

Chris Harrison can't single-handedly sweep up all the dirty grime of broken dreams and prom gown carnage that surely haunts the driveway of The Bachelor Pad. That's where Arie steps in. Tailored, handmade suits be damned! There's effing yard work to be done! And he's just the guy to (pretend to) do it.

Arie can read at a first grade level - just like most of his female companions!

Okay, okay. I realize The Giving Tree is Arie's favorite "children's book" and despite it being a depressing story about the pitfalls of codependence, I kind of love him for giving good ole' Shel Silverstein a social media shout out. Plus, he can bond with Bekah over the scraggly nature drawings. Which look disturbingly like her unshaven armpits, no?

That Arie, he's a serious napper. And I fully support this.

How much do I love naps? Let's just say that if it came down to a date with Jude Law (in full Young Pope gear — because yes, I'm oddly attracted to that getup) in exchange for NEVER taking another nap again — I'd have to cry Jude-less into my pillow. As I head straight into my second nap of the day.

Arie doesn't just play a rugged man on the racetrack. He plays one on scenic mountaintops too, guys!

Some might think Arie scores hotness points whenever he poses atop a rugged and slightly dangerous looking vehicle. But me? I must be missing those particular hot-guy-goggles. (What gives?! Do I need an intervention? Or hormone pellets?) When I see this photo, my first thought is to wonder if the hair and makeup techs are out of frame, or if they've just thrown themselves off the damn cliff already. Death by cheesiness.

Arie likes pizza! And ironic statement t-shirts! And sunglasses selfies! This, my friends, is a problem.

Why is this a problem? Because every girl on Instagram trying to promote her "fun" and "quirky" side likes these things too. Including me. Now I'm officially repulsed by myself too. GREAT! #ThanksArie

But an ugly Christmas sweater is A-okay in my book!

Ugly Christmas sweaters with friends = cool. Using what suspiciously appears to be a selfie stick though? Well, that's a different story. It's okay, Arie. Imma give you a pass on this one, bro. You do you, boo. Happy belated holidays!

But the real reason I haven't gotten on the Arie bandwagon yet is this: HE KISSES ANYTHING THAT MOVES.

I've seen more of Arie's tongue in the past two weeks than I see of my dog's when he's straight up licking my face at 6am. This is not endearing me to The Bachelor in his "deep search for love." Maybe production is to blame for the closeups of Arie's incessant face-sucking? Maybe the women are SO irresistible that his instant "connection with their souls" unleashes the slobbering freshmen within? Whatever the case may be, Arie needs to holster that thing back inside his jaw if he wants to be taken seriously. And if he doesn't want to get strep. This is flu season, people.