Arie of 'The Bachelor' Likes His Women Young and Crazy, Which Is Why Bekah or Krystal Could Win | 22 Words 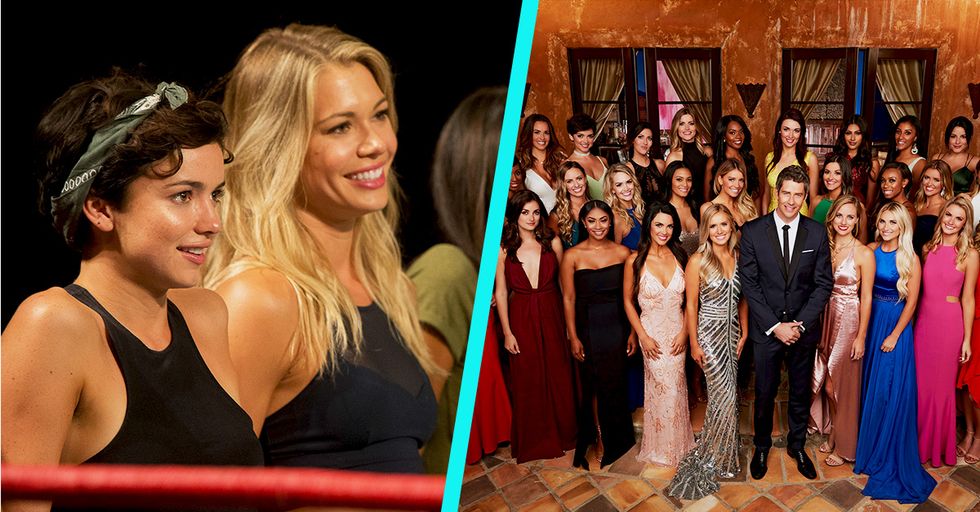 Arie of 'The Bachelor' Likes His Women Young and Crazy, Which Is Why Bekah or Krystal Could Win

In this week's Bachelor, Arie found out Bekah M. is twenty-two years old and that Krystal is bunny-boiler psycho. So he gave them both roses. Because he likes them young, and he likes them crazy. Full stop. And if anyone thinks his attraction to either of these women is merely a producer-driven drama tool, consider this: Arie is the Bachelor who will kiss anything that walks on two legs, but still sent contestants home mid-show and mid-date in previous episodes.

Here's why Bekah and Krystal will be sticking around until the end.

Faux furs are fun! And they make the young'ns seem older.

Arie is loving Bekah’s retro vibe and her "strong, independent, sexiness" - emphasis on sexiness. Bottom line: He wants to jump her bones, but doesn’t want to get arrested. The faux furs and short hair put him at ease. “She’s a lot deeper than women I’ve dated in the past," says Arie of the girl who was born while he was about to enter his freshman year of high school.

Sienne gets the first one on one date in Lake Tahoe, but she's just too damn normal for Arie.

Arie and Sienne “let love soar" on their boating and parasailing date, then makeout, dine, and dance. Sienne is way too smart for this Bachelor, but wants a “happy ending." Her parents’ marriage was troubled, so she thinks relationships are hard. She also poignantly comments on not seeing many love stories for people of color out there, so she's cautious. Arie is stunned by Sienne’s maturity and insight because he’s basically a high school dropout. So he gives her a rose to show that love stories happen to “people who look like her." Yup. He said that. To Sienne’s further credit, she doesn’t hurl herself off of the stage later out of sheer humiliation while dancing with Arie to a country band.

Krystal starts to unravel on the group date.

Krystal knows she is perfect for Arie. “I’m secure," she says with batshit crazy eyes, as she panics about her date with twelve other women in the woods. And for real you guys, I feel like the camera man may have just shivered because the frame shook imperceptibly. No? Just me? Okay, moving right along...

The real panic sets in when Arie drinks his own urine.

Just kidding! Oh, those producers. They are some HIGH-larious people. After everyone is forced to pee, then instructed to drink it "for survival," Arie's pulls his little prank of drinking apple juice in the name of good ole' urine sipping fun. No one is amused. But Jacqueline is impressed...and maybe a little bit cuckoo, herself?

Jacqueline's brush with disaster is still not wild enough for Arie, though.

Jacqueline is apparently desperate enough to take a swig of her own pee, which likely smells like hair products and bad decisions. When Arie sees what this not-so-bright chick is about to do, he stops her just in the nick of time – or maybe not. Did I see a drip on that lip? Gah! It's worth noting that when I ponder out loud if there’s something wrong with this woman, my husband comments from the background: She does look a little touched.

On their navigating challenge, Krystal is placed on Arie's team. However, this proximity isn't close enough for her. She'd like to skin him and wear him as an Arie Suit, thankyouverymuch. While Krystal bitches and moans about not getting enough alone time with Arie on their group date, Kendall makes out with him AFTER LITERALLY EATING BUGS. Krystal could take some lessons in real insanity from that girl. Special mention must also go to Kendall's taxidermied duck, Ping, who allegedly traveled along in her hood for this group date.

When Arie’s group gets to the oasis first, they all strip down to bathing suits for the hot springs. Krystal sidles up next to Arie, who dutifully puts his arm around her. Caroline and Tia giggle about Krystal's thirstiness. “It, like, feels so juvenile! I just want to be with him and not have three other girls grab his hand!" whines Krystal when the other girls successfully regain his attention. Um, this chick is on the wrong show, then.

But will her spot-on opinion of Krystal win any points with Arie? Nope. While Chelsea and the rest of the gang are rolling their eyes at Krystal's ridiculousness, Krystal is crafting her next sly move. She plans to convince Arie of her sudden feelings at dinner that night. “I don’t even know what to say, but whatever I do, it’s gonna be perfect," she reflects. Tia thinks Krystal is “ingenuine." Also: Tia thinks “ingenuine" is a word.

But it might not be "crazy" that wins in the end - it will be youth. As the gods demand.

Bekah M. scores a one on one date with Arie. “She seems super mature," he says as they make out in a hot tub. At dinner, Arie finds out Bekah is 22, which is 14 years younger than his cardigan-wearing behind. Would she be ready for marriage? Is he too boring for her? Does she still like to eat food that’s not pureed? Arie desperately wonders. Arie wants this girl BAD, but she’ll probably leave his middle aged carcass before the post-Bachelor press junket is even complete. Bekah swears she’ll stay. "Everyone in my family gets married young!" she assures him. Arie is ready for early bedtimes and button downs. Bekah is ready for Burning Man. But he gives her the rose anyway, then sticks his fingers straight through her hoop earrings when he grabs her face to kiss her. Proving, of course, he needs bifocals. Hey - What’s that sound? Oh! It’s 13 women’s heads exploding back at the chateau when they find out Bekah revealed her age and got the rose anyway.

Okay, heads really do explode when Krystal pulls her final move of the night.

At the rose ceremony, Sienne, Bekah, and Tia have roses. There will be no cocktail party because Arie has already made up his mind. But just as everyone not named Becca/Bekah begins to freak out, Krystal interrupts the ceremony to pull Arie aside, making enemies of exactly 100% of the remaining women. Her vocal fry is almost only discernible by woodland creatures at this point, but it sounds as if Krystal is begging Arie to keep her because she has a shitty family and needs love. So he does. Brittany and Caroline are sent packing, both in disbelief over Arie choosing Krystal over them. “I need to make sure it’s just Arie and I at the end of this," Krystal tells the cameras after the group clinks champagne glasses. Oh, something tells me she'll be sticking around for quite some time.