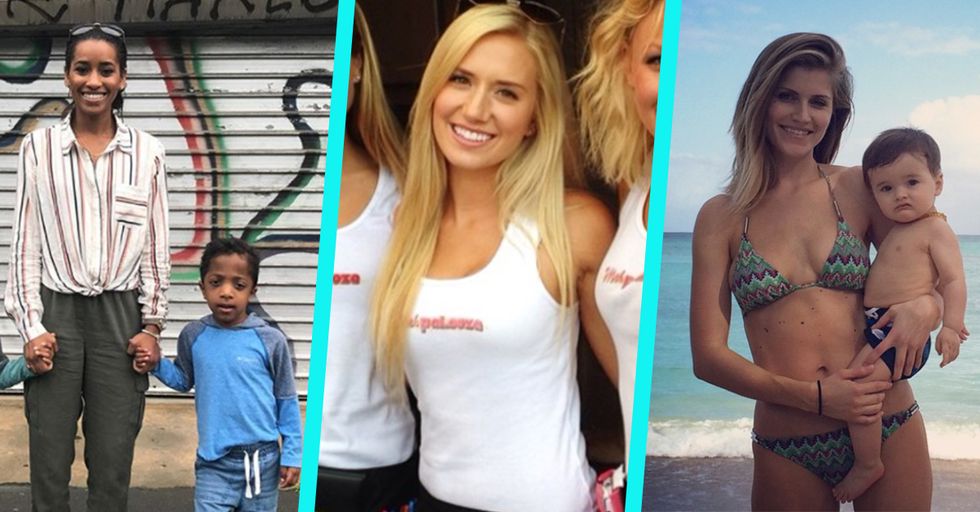 Arie's Final 10: a Peek at Who They Were Before 'The Bachelor'

After hearing the strange news about Bekah M being reported as a “missing person” by her family back home, we decided to do some digging into the remaining Bachelor contestants’ histories to see what other bones might be buried.

Here’s what we unearthed in the process. Instagram detectives, unite!

Krystal’s voice sounds like nails on a chalkboard. Also: It is completely FAKE.

Check out this video of Krystal and her friend working out, pre-Bachelor fame. More to the point, check out Krystal’s voice which sounds nothing like the psychotic serial killer whisper-whine she’s been putting on for Arie all season long. Honestly, I am more frightened now than ever.

Chelsea says her ex left her with a 6-month old baby and a pile of trash bags on the side of the road.

But here she is on the beach posting selfies and looking – I might add – way too good for a woman who recently gave birth to a human child. (Actually, good for her!) Instagram, of course, isn’t the place to air all of one’s dirty laundry. But in Chelsea’s case, it’s also not the place to take even one week off from happy-girl posting during the “hellish" year her ex put her through. Hmm.

Oh my god – Is Jacqueline a single mom too?!?

No - whew. This is her niece. But DUDE, that photo looks very “New Mom" to me. No? Am I alone over here? Okay. Calm down, everybody. False alarm.

Sienne is also a doting aunt, not to mention much too smart and cultured for Arie.

Sienne is a student of physics, a citizen of the world, and a loving aunt to her 5-year old nephews (who already have larger vocabularies than Arie, we will assume). If Arie were to see this photo of Sienne, here’s exactly what he would say: ‘That’s awwwwwweeeeessome." Then he would grab her face with both hands and maul her.

Much like her time on the show, Lauren’s backstory isn’t all that riveting.

For example, here’s one of her more exciting moments pre-Bachelor. Please sit back and enjoy, Lauren Posing In Waitress Uniform With Coworkers. While Lauren was “werkin," other Bachelor finalists were preparing for marriage…

Check out Jenna posing in a wedding dress. For fun.

Alright, so maybe this was a promo for gown sales. But still – why is she the model at a wedding show? I thought this chick was a real estate agent? Oh no – that’s just every other person on this show. My bad.

But did you know she also likes to bust out the ukulele on occasion, sing a little ditty, and post it online? Well, now you do. Carry on.

I was hoping for much more dirt on Becca K.

Alas, all we have are some bathroom mirror selfies and this: a requisite sorority sister bar moment. What can I say? Midwestern girls don’t have much occasion to post yoga poses by the ocean. We’re just lucky she’s not wearing a cheese head.

Dressing as a doughnut for Halloween? Fine. But that top knot/half bun situation going on upstairs? Downright scary.

If this doesn’t disturb you, then all I have to say is: Good luck in middle school! Because I’m assuming you are under the age of twelve, which Bekah M looks to also be here. Yet this photo was taken just over a year ago. Yup. Let’s all just ponder that troubling fact while Arie backs sloooowly away from the underage girl…